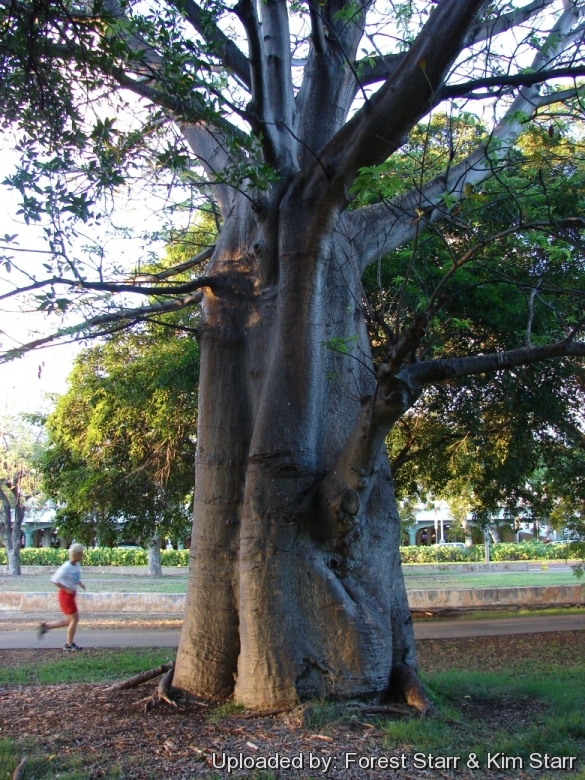 Origin and Habitat: It is native to much of Africa and the most widespread of the Adansonia species, but restricted to suitable habitats that comprises hot, dry woodland on stoney, well drained soils, in frost-free areas that receive low rainfall. It ranges from the dry sub-Saharan scrub to the grassy savannas-woodland of South Africa.
It is also widely grown as a street and park tree in the tropics of both hemispheres.
Ecology: Bats primarily pollinate the large white flowers with their ruffled petals at night, although many different insects and other creatures such as birds will visit the sweetly scented flowers.

Description: The African baobab (Adansonia digitata) is one of the plant kingdom's strangest tree, it is not particularly tall growing (up to 25 m tall and usually less) but the trunk is massive: as much as 11 m in diameter and shaped like a bottle. It is a deciduous tree, losing its leaves in the dry season.
Stem: The main stem of larger baobab trees may reach enormous proportions of up to 28 m in girth usually squat cylindrical trunk gives rise to thick tapering branches resembling a root-system, which is why it has often been referred to as the upside-down tree. The trunk is used to store water during dry periods It's not uncommon for old trees to have several huge trunks branching off near the ground, and a tree 20 tall can have a spread of more than 30 m. The stem is covered with a bark layer, which may be 50-100 mm thick. The bark is greyish brown and normally smooth but can often be variously folded and seamed from years of growth.
Leaves: Palmately compound and clustered at the ends of short, stocky branches. They are divided into 5-7 finger-like leaflets. Being deciduous, the leaves are dropped during the winter months and appear again in late spring or early summer.
Flowers: Large , heavy white and sweetly scented that hang down on long stalks. The flowers are 10-20 cm across and have waxy crinkled petals about 10 cm long that surround dense clusters of purple stamens that look like powder puffs. The flowers open only at night and are pollinated by bats feeding on the nectar.
Blooming phenology: The baobab blooms At the end of the dry season. The flowers emerge in the late afternoon from large round buds on long drooping stalks. The flowers fall within 24 hours, turning brown and smelling quite unpleasant.
Fruit: Large, pendant egg-shaped capsule (often >30 cm long), they consists of a hard, woody outer shell velvet covered, gray or yellowish brown, and apparently look like dead rats hanging from the tree by their tails. Thy are filled with pulp that dries, hardens, and falls to pieces which look like chunks of powdery, dry bread. The off-white, powdery substance is apparently rich in ascorbic acid.
Seed: Hard, dark brown to black, kidney-shaped

Notes: In the wet months water is stored in its thick, corky, fire-resistant trunk for the nine dry months ahead. Some large individuals live to well over a thousand years of age. However the age of a large large baobabs cannot be reliably established using tree rings. Carbon dating has shown that a 7 m diameter tree is about 600 years old, so a large tree is probably over 1000 years old. This age is a lot less than some previous estimates that have been placed at over 5000 years old. The baobab is just as beautiful in winter after the leaves have dropped and the tree's grandly grotesque form can be seen and enjoyed. The baobab tree is steeped in a wealth of mystique, legend and superstition wherever it occurs in Africa. It is a tree that can provide, food, water, shelter and relief from sickness. 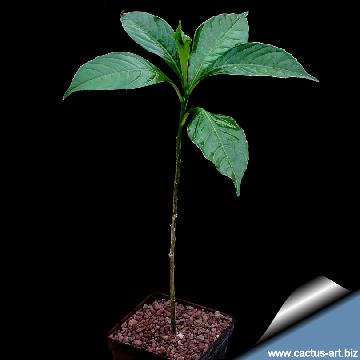 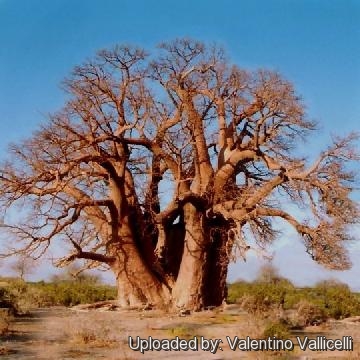 The Baobab is the largest succulent plant in the world. (Adansonia digitata) Photo by: Valentino Vallicelli 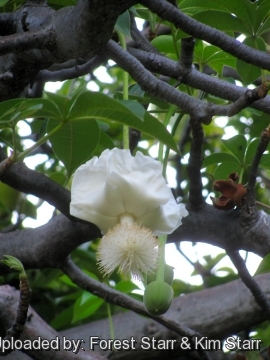 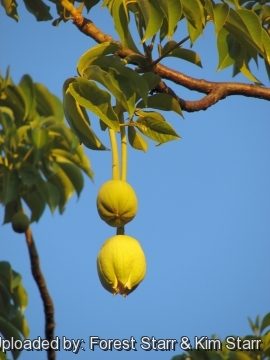 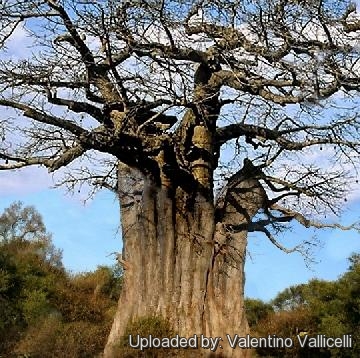 Baobab is leafless for nine months of the year. (Adansonia digitata) Photo by: Valentino Vallicelli 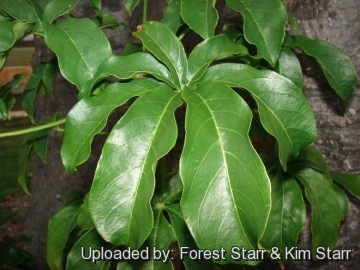 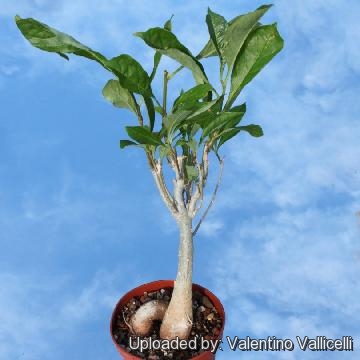 Baobab can be trained as a bonsai tree. (Adansonia digitata) Photo by: Valentino Vallicelli 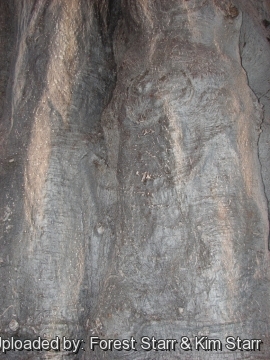 Cultivation and Propagation: Baobabs are quite easily grown from seed although they are seldom available in nurseries. Grow in good light, don't over-water and provide a minimum winter temperature of 10-13C as they cannot tolerate even mild frost. Baobab is very drought tolerant, and needs no water at all during the winter. Despite its adaptations to dry climates, baobab will thrive in rainy climates provided it has a well drained soil provided they are frost free and don't experience cold winters.
Saplings can be effectively grown in containers for many years before becoming too large and requiring to be planted into the ground. In this manner one can move them out of the cold into a warm position in a glasshouse or indoors behind a sunny window to prevent frost damage. It can be also trained as a bonsai tree.

Uses: The baobab's bark, leaves, fruit, and trunk are all used. The bark of the baobab is used for cloth and rope, the leaves for condiments and medicines, while the fruit, called "monkey bread", is eaten. Sometimes people live inside of the huge trunks.

Reproduction: The seeds should be soaked in a container of hot water and allowed to cool, they may then be sown after soaking for 24 hrs. Sow in trays, pots, etc o in a well-drained seedling mixture containing one-third sand in a propagator or warm place to maintain an optimum temperature of 25-27C. Sowing Depth: 1.5 mm. Seeds are best sown in spring and summer . Germination may take from two to six weeks. Baobabs grow reasonably quickly when they are young. It also can be started from cuttings.