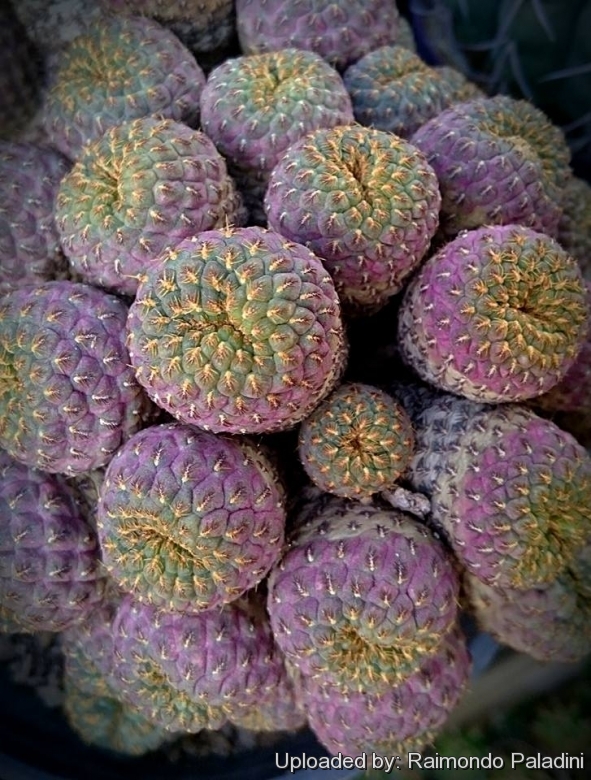 Description: Rebutia canigueralii subs. rauschii f. aureispina (Sulcorebutia rauschii cv. Yellow Spines) is one of the many geographical form of the very variableRebutia canigueralii. Many of its morphological and geographical variant was early classified as different independent species, but nowadays all this plant are considered part of a multiform species, where each form is linked to others by populations of plants with intermediate characteristics. Rebutia canigueralii subs. rauschii f. aureispina has short yellow pectinated spines on the typical mauve body of Sulcorebutia rauschii. It is very nice and distinctive.
Habit: It is a low growing miniature cactus species, that readily forms clumps of many heads.
Stem: Individual stems 2(4) cm tall, 3(5) cm in diameter. The stem is covered by flat mauve and green coloured tubercles (about 5 mm wide)
Areoles: Long narrow with short white felt.
Spines: 9-11 short yellow radial spines, 1 to 5 mm long, pointing diagonally and downward, completely flattened against the tubercles, they take the characteristic form of a fishbone.
Roots: Conical.
Flower: 20-50 mm long, 35-50 mm wide; floral tube funnel-shaped yellowish green with tan coloured scales, tepals deep magenta with a clearer throat.
Blossoming time: Late spring. 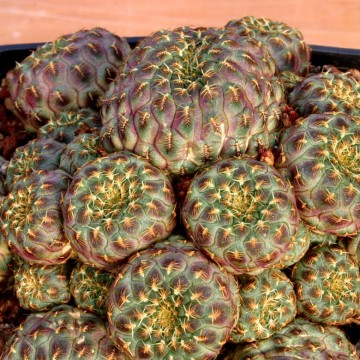 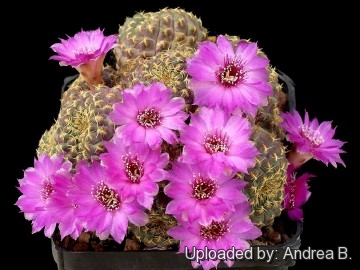 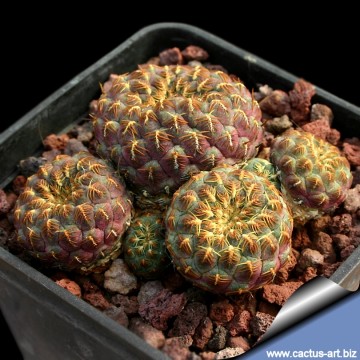 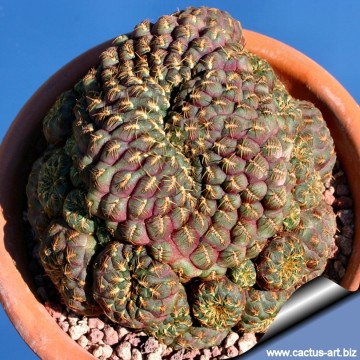 A plant with an elonged apical meristem line (Cresting?) Photo by: Cactus Art 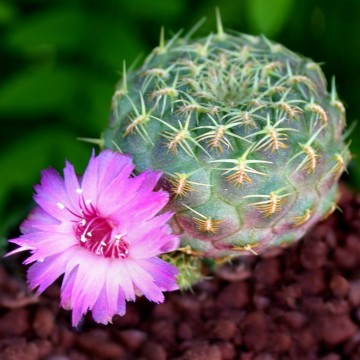 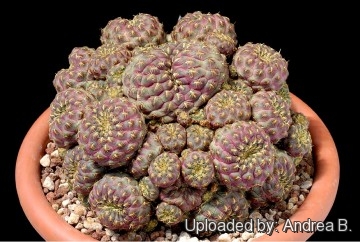 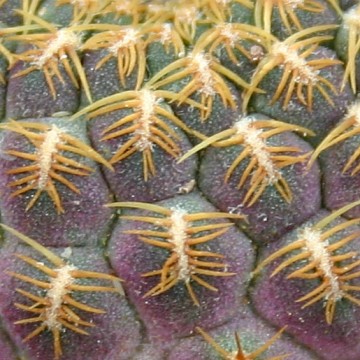 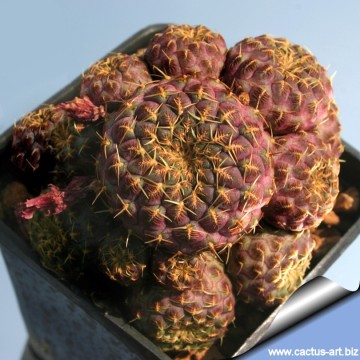 Cultivation and Propagation: Rebutia canigueralii subs. rauschii f. aureispina is a mountainous plants with a thick taproots and is susceptible to overwatering, it grows rather slowly and need a very good drainage to avoid rotting. It requires also an appropriate air circulation and is sometime grafted to avoid root problems.
Soil: It loves a very permeable, coarse mineral soil.
Repotting: It require a deep pot suited to accommodate the swollen root, repotting with fresh potting-mix should be done every other year or when the plant has outgrown its pot. However, repotting doesn't necessarily mean they'll need larger containers. To prevent rottenness it is also advisable to surround its root neck by very rough sand or grit, this help a fast water drainage.
Sun Exposure: Light shade when young, full sun later ( light shadow my be useful in the hotsummer days)
Hardiness: It is cold resistant to -10° ( or less depending on clones) for short periods of time. They need to be kept in a cool place during winter rest. This is important for the flowers ,as well as for their health. Without this cool winter period, they normally won't get many buds.
Watering: It requires moderately watering through the growing season. This can be done weekly or more frequently during the summertime, if the weather is sunny enough, but allow to dry fully before watering again. Kept this way, plants will show a healthy growth. Keep rather dry as soon as the temperature starts dropping in October and keep it strictly dry throughout the winter quiescent period since ot is very sensitive to any moisture excesses. The plants may survives outside without protection in winter (cold hardy to -5° ) but is then somewhat prone to rot, too.
Fertilization: Give an occasional high potassium liquid feed during the active growing period.
Garden uses: It is a fine plant for a rock garden or container, contrasts well with agaves, yuccas, and low-growing flowering plants. Nice planted with Agave utahensis, another very hardy species.
Pest and diseases: They are generally fairly easy to grow, especially if kept pest-free. They are susceptible to, scale insects and spider mite. Watch carefully for infestations of stem and root mealy bugs, and damage from these may well initiate fungal attack.
Propagation: Propagation: Seed, cutting, grafting. Take cuttings spring or summer, let them dry till the ends callous well. Then replant them in fresh cactus soil that is ever so slightly moist, and keep it that way till they root. Surface sowing is the best; seeds germinate in 14-28 days at 20° C, remembering that seedlings dislike strong light and dry conditions.