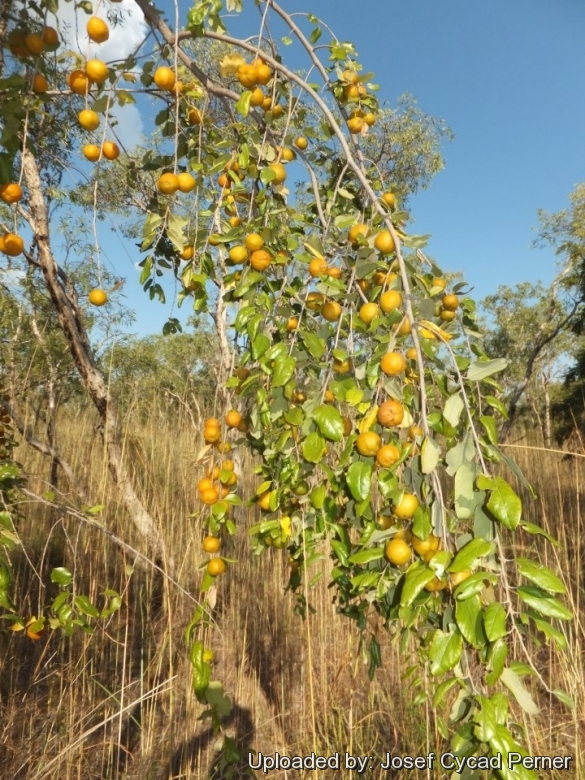 Origin and Habitat: Distribution: Torres Strait islands to the Clarence River Queensland, Northern Territory, New South Wales, Western Australia & Papua New Guinea.
Habitat and ecology: Petalostigma pubescens is a very widely distributed species which is a common component of open forest and woodlands dominated by eucalypts, especially along creeks in dry sclerophyll forest. It also grows in dry rainforest and sometimes on coastal sand dunes. The dispersal of seeds of P. pubescens comprise three phases: the first or frugivorous phase is ingestion of the fruit by the large flightless emu, Dromaius novaehollandiae, which may retain the fruit within its intestinal tract for more than 72h. After the partially-degraded fruit is voided, it dries and the second phase takes place as an explosive dehiscence of the endocarp which scatters the seeds 1.5 to 2.5 m from the point of deposition. The final dispersal phase is transport of the seed by ants attracted to their elaiosomes (fleshy structures that are attached to the seeds of many plant species ). Up to 1200 seeds may occur in a single dropping and the advantage to P. pubescens of the two final phases apparently lies in the reduced seedling competition consequent on wider dispersal of the seeds. Clifford and Monteith (1989). Caterpillars of the Copper Jewel Hypochrysops apelles use this as a food plant.

Description: The Quinine Tree Petalostigma pubescens is an attractive shrub or a small to medium tree with a spreading crown and a height up to about 5 m in height, and sometimes as high as 10( or 12) metres by a spread of 3 to 4 metres. The flowers are inconspicuous, but are followed by 6-8-ribbed round, orange-yellow fruit up to 2 cm in diameter that are quite prominent. The leaf underside hairy. It was first described by the Czech botanist Karel Domin (1882–1953) in 1927
Derivation of specific name: Pubescens from Latin 'pubescens' downy, referring to the leaves.
Stem: Trunk commonly short up to 75 cm in diameter with large spreading branches from near ground level, not buttressed. Outer bark grey and black vertically fissured into short ridges 2-10 cm long, broken by horizontal fissures. Young growth with grey silky hairs on the leafless section. Leaf shoots with grey hairs on the top surface but rusty below. Leaf buds silky hairy. Milky sap not present in cut squeezed new shoots.
Leaves: Alternate, simple, the margins entire, (6-)20-60(-80) mm long, (5-)10-25(-45) mm wide, ovate to orbicular often blunt at the tip and rounded at the base. Dark green and glossy above, dull grey and finely felty beneath with both long and short hairs, smooth when mature. Petiole grey, hairy. 3-8 mm long. Midrib conspicuous on both surfaces, sunken above but raised beneath.
Flowers: P. pubescens is dioecious, with male and female flowers on different plants. The flowers are creamy to greyish-brown, males in axillary clusters of three to four and the females singly. Both sexes with four to six rounded silky-hairy sepals, 2-4 mm long. Petals are absent.
Male flowers: 4-8 mm across, creamy fawn, hairy. Stamens numerous, joined into a hairy cylinder except at the top where free and smooth.
Female flowers: About 8 mm across, creamy-fawn, hairy. Ovary rounded to egg-shaped, silky, four-celled, with three or four styles, each expanding into a large wedge-shaped, dark brown petal-like stigmatic arm.
Fruit (drupes): Round, with six to eight vertical grooves, 10-25 mm long, 13-22 mm across, hairy, with a fleshy orange-yellow, outer covering over a woody,mostly four-celled fruit. One or two oblong. slightly compressed dark brown seeds in each cell. The fruit is very bitter and odourless.
Seeds: 3 or 4, 8-12 mm long, inside a bony endocarp 5-7(-14) mm long.
*Blooming season: P. pubescens flowers in October to Ianuary. Fruit from this species ripe April to November.
Remarks: Does this tree actually contain quinine? Some authorities say ‘yes’, and others ‘no’. But quinine occurs naturally only in the bark of the Cinchona tree. Since P. pubescens does not contain Quinine the source of the overwhelmingly bitter taste of the berries is most likely caused by a Shikimate salt of an amino sugar. 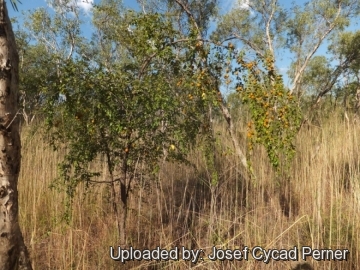 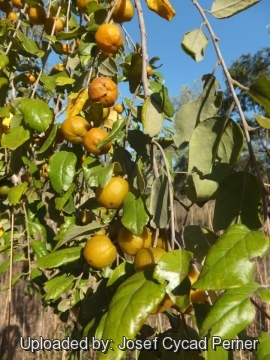 Cultivation and Propagation: Petalostigma pubescens is is often regarded as one of the more attractive tree of northern Australia, due to its conspicuous orange-yellow fruit up to 2 cc across. It is suited to moist situations on sandstone ridges or tablelands near the coast in tropical and subtropical climate, and can grow on poor and rocky soils.
Soil: It is adaptable to many kinds of well drained soils.
Fertilization: Need a perfect fertilizer diet including all micro nutrients and trace elements or a slow release fertilizer applied in spring and summer, or according to package directions.
Water Requirements: It tolerates low levels of humidity and drought, though it prefers evenly moist but not consistently wet medium. When supplied with adequate moisture and fertilizer it is also fairly fast growing. This plant is drought tolerant once established. It dislikes soggy soils. Water young plants for healthy look and fastest growth.
Light: It prefers bright sunny locations, but it also does well in part shade with some direct sunlight when young.
Wind resistance: It endures drying winds.
Hardiness: These plants frost sensitive, and require some protection if cold periods are longer than normal. ( USDA Zones 10-11)
Roots: Usually not a problem
Uses: It is used in gardening and landscaping in steep rocky terrains. Seedlings are quite slow, but speed up once they start to trunk. Time to ultimate height 20-50 years. Whether it contains quinine or not, both the bark and the fruits of Petalostigma pubescens have been used traditionally to make a bitter tonic, and to treat fevers, including malaria. A bark infusion has been used as an opium antidote, to relieve sore eyes, and as an antiseptic wash. Fruits held in the mouth were reputed to relieve toothache. Fruits used for medicinal purposes are used fresh, as they apparently lose their activity after drying.
Traditional uses: The wood of the tree is very hard, and was used to make spear-throwers.
Propagation: It is propagated by seed.