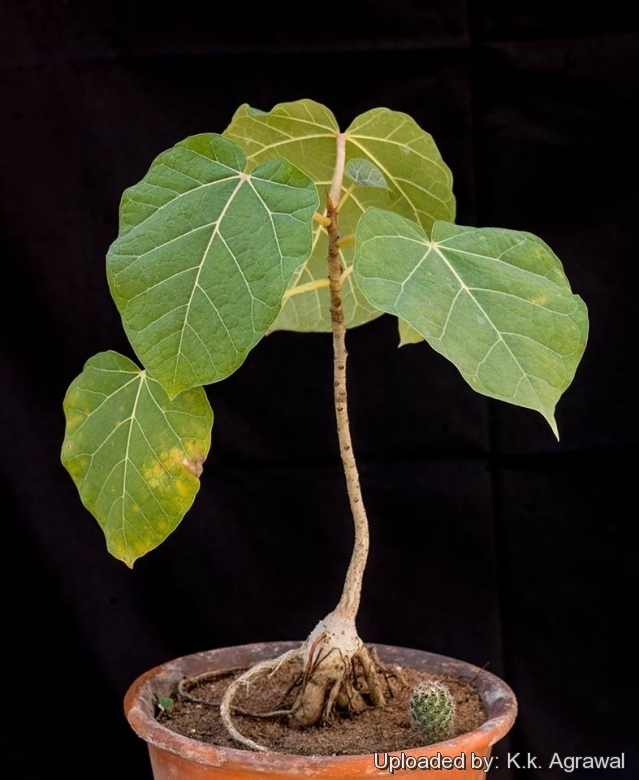 Origin and Habitat: Guinee, Mali, Cameroun, Ghana, Uganda, Nigeria and Sudan to Ethiopia, south to Botswana, KwaZulu-Natal, and South Africa (Transvaal). It is a common shade tree widely grown in Africa.
Altitude range: 152 - 1615 metres above sea level.
Habitat and ecology: Ficus abutilifolia is often an (hemi-)epilithic (granite, banded ironstone, basalt, sandstone, laterite), a rock-splitter that grows in hot and seasonally dry places in lowland and medium-altitude savannah, woodlands, rocky shorelines and islands in lakes and rivers, especially in riverine vegetation and on rocky outcrops with Sterculia setigera and Cordyla riclutrdii. Pollination of flowers within the receptacles is carried out by tiny wasps which enter through the ostiole, a small opening at the tip of the receptacle. The fruits (figs) are relished by a wide range of birds and animals.

Description: Ficus abutilifolia (abutilifolia: with leaves like Abutilon [Malvaceae]) is a bushy shrub 3-4 m tall, eventually becoming a small tree tree 10-15 m tall, deciduous or semi-deciduous with white stems and roots that stand out against the rocks. Crown spreading, more or less dense. The roots and stems of the "large-leaved rock fig" are an impressive sight.
Stems: Main stem crooked, twisted or contorted branching low down, exuding a milky latex when cut. Bark creamy-white or yellowish-white, rather smooth, powdery or somewhat flaking. Leafy twigs 6–15 mm thick, stout, hairless or almost so and marked with leaf and stipular scars. The wood is light and soft, yet tough.
Remarks: In young specimens the base of trunk forms a distinct caudex which make F. abutilifolia popular with 'fat plant' collectors and a good subject for bonsai.
Roots: Conspicuous, white to yellow, often exposed extending sinuously over the rock surface and into crevices, well adapted to hugging rock faces and splitting rocks and earning this species a place among the true rock-splitting figs. The ability of the roots to reach great depths of up to 60 m and that these may reach sources of underground water, has been recorded. This species is one of the splitting figs which include Ficus cordata, Ficus glumosa, Ficus ilicina, Ficus ingens and Ficus tettensis.
Leaves: Altemate in spirals with petiole 2-18 cm long, 2-4 mm thick, lamina leathery, to cordiform, broadly ovate, almost circular or subreniform, 5-20 cm long, 5-18 cm broad, smooth or slightly hairy, particularly on veins, margins entire slightly wavy, apex rounded to acute, base heart-shaped. Principal lateral veins 5-7 on either side of midrib, conspicuous, basal ones prominent, yellowish ending at the margin at or above the middle of the lamina, tertiary venation partly scalariform. Stipules 5–20 mm long, phairless or almost so, caducous.
Fruit (figs): Borne singly or in pairs ( or sometimes up to 4 together) in the leaf axils on terminal branchlets or on bare branches below the leaves, basal bracts (2)2.5–3.5 mm. long, persistent, free parts occasionally caducous, leaving a collar-like rim. Receptacle subglobose, obovoid, ellipsoid or pear-shaped, 9–20 mm. in diameter when fresh round, green, faintly spotted with cream, smooth or slightly hairy, becoming 15-25 mm in diameter, pale red to pinkish or purplish, when ripe, pedunculate or subsessile (stalk 3-15 mm, 5–15 mm in diameter). Figs edible.
Similar species: F. abutilifolia is a fairly distinct species but does resemble Ficus tettensis and Ficus glumosa which are readily distinguished by their smaller, hairy leaves and hairy branchlets. F. abutilifolia is perhaps conspecific with Ficus populifolia. 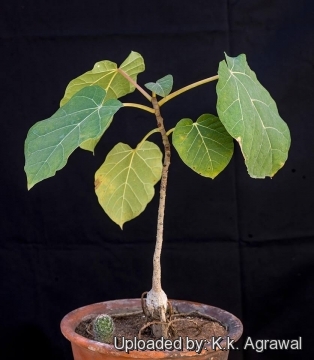 Ficus abutilifolia Photo by: K.k. Agrawal
Send a photo of this plant.

Cultivation and Propagation: Ficus abutilifolia is fairly easy to grow both indoors, as well as outdoors in warm climates in a garden with well-drained soil, especially a rock garden. In the winters it is deciduous, except in very tropical areas. It is drought but not frost-resistant.
Growth rate: It is a fairly slow growing plant, but in 10 years it can easily outgrow its indoor location, requiring a 'pruning'. Though branching is usually a response to naturally process one can stimulate branching by cutting off its top. It has amazing regenerative properties and is suited for bonsai culture.
Soil: It needs a draining cactus potting mix.
Repoting: Repot the plant every 3 years; this is quite tricky given all the spines. The best way is to wrap several layers of newspaper around the trunk where it is to be handled.
Waterings: It needs regular water when the plant has leaves, contrary to popular belief, it likes a lot of water in the warm summers, as long as it's planted in a very well draining soil. Indoors it is best to err on the dry side, or it is prone to rot.
Exposures: It like full sun to light shade with warm temperatures.
Traditional uses: Ficus abutilifolia is used as a shade-tree and the tasty fruits are enjoyed by people. The fruits should be collected when soft and ripe.
Medicinal uses: Decoctions prepared from the leaves are used in promoting fertility in humans and good crop yields, and the milky latex derived from the plant is used to remove skin warts. In addition, bark decoctions are taken by men as a strengthening tonic .
Propagation: It is best grown from seed. The fresh seeds can be distributed over the surface of the growing medium and covered lightly with fine grit. Sow in spring. Seedling trays with a depth of 70 mm are recommended for sowing. Seed start sprouting in just 3-4 days ( but continue to germinate erratically for about 1 month) from sowing depending on temperature and the freshness of the seed-fresh seed and warm temperatures will favour more rapid germination. Seedlings should be placed in a sunny position and eventually transplanted into a well-drained sandy mix rich in organic matter. They are also propagated by removal of offshoots although this species does not root as readily as some of the other fig species. Carefully break off softwood or semi-hardwood cuttings in spring, around 200-250 mm long, they should be insert into a washed river sand mix and place in a misting unit, or if this is not available, place the tray with cuttings inside a clear plastic bag to reduce the adverse effects of transpiration. These should root within a month and be ready for transplanting in a further 3-4 weeks.