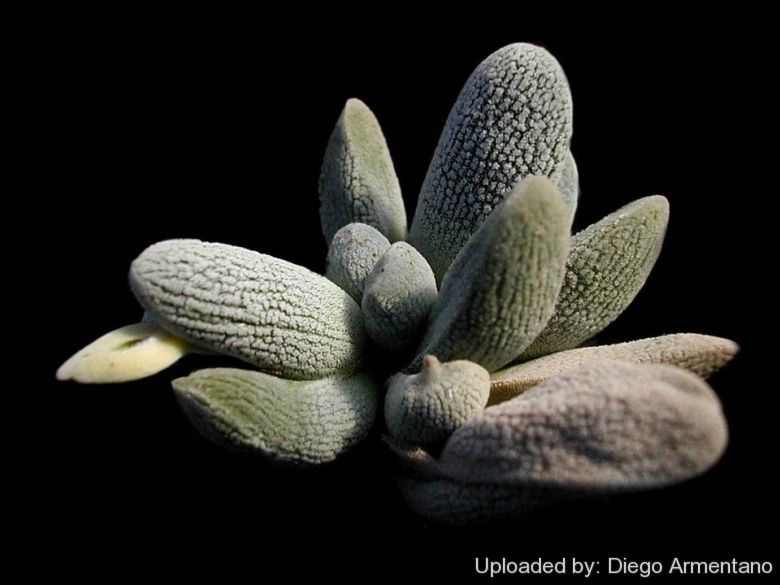 Origin and Habitat: Republic of South Africa, Western Cape, mainly in the Little Karoo from near Montagu to Oudtshoorn but it has also been recorded from near Willowmore and Steytlerville. This plant is not considered to be rare in any way and not declining.
Habitat and ecology: Crassula tecta is an endemic to the winter-rainfall lowland plains of the Little Karoo. It grows on gravel flats, and on gentle lower slopes between exposed bedrock, usually shale, and sometimes, but not always, associated with white quartzite pebbles in the open, away from the protection of larger shrubs and in full sun. It is not common but occasionally occurs in relatively dense stands. Other interesting plants to be found there are Aloe variegata, Anacampseros papyracea, and Sarcocaulon patersonii. The white papillae which cover the leaf surface give Crassula tecta a quartzitic stone-like appearance and render it virtually invisible to passing predators. The white papillae also act as a sunscreen reflecting most of the sun's harsh radiation, serving both to protect the leaf tissue from harmful UV rays but also to prevent the leaf from getting excessively hot, much like some cacti which are covered in white wool-like hairs, but also makes it somewhat unpalatable to animals. The life span would be in the region of 3–7 years, perhaps longer if conditions are favourable.

Description: Crassula tecta is a small and attractive perennial species with obtuse, greyish-green, thick leaves 20-30 mm long densely covered with ash coloured papillae resembling the scales of a butterfly's wing. It is somewhat more succulent than other members of the genus Crassula. Growth is not very fast, but eventually low compact clumps up to 5 cm tall and 6 cm wide, are formed which are entirely different from any of the other crassulas. The inflorescence consists of a head of several, white flowers at the end of a peduncle about 10 cm tall. There are several different looking clones of C. tecta.
Derivation of specific name: The specific name comes from latin “tecta”, “house-tops” and refers to the way in which the leaves cover one another, much like overlapping tiles.
Blooming season: Crassula tecta is a winter grower and will usually flower in autumn to mid-winter (between April and June in habitat).
Stem: Scarcely any, very short, semi-succulent, usually single or sparingly branched, but at times much branched and usually swollen at base, axis to 5 mm thick, with old leaves not deciduous.
Roots: Fibrous, shortly branched adapted to growing in very shallow soils.
Leaves. Sub-radical in basal rosettes. Connate, opposite and stacked at right angles to the pair above and below, ovate to ovate-lanceolate, highly succulent, 10-25(-35) mm long, 3-10(-15) mm broad, lamina flattish, epidermis with short, hard, irregularly shaped papillae, broadened towards apex but often with recurved cilia towards base, grey-green or ash coloured, upper face flat to slightly concave near the base, lower face convex, tip rounded, rarely bluntly acute or obtuse. In the eastern end of its distribution the leaves are more flattened and are keeled along the edge and tip.
Inflorescences: Elongated globose thyrses. Scape erect filiform, to 30-10(-12) cm long, covered with rounded papillae. In the field the inflorescence is usually unbranched but under cultivation it often consists of up to 3 part-inflorescences, in which case plants may be similar to Crassula sericea.
Flowers: Several, minute, white, 5-petalled and sessile. Sepals broadly triangular, 1,5-2 mm long, with rounded often obtuse apices, with recurved hairs and marginal cilia, fleshy, grey-green. Corolla white or cream to 5 mm long, tubular. Corolla lobes fused at the base, oblong-oblanceolate, 3-4 mm long, white to cream, tips recurved with indistinct dorsal appendage. Anthers yellow.
Fruits: Tiny fruits consist usually of 5 more or less separate parts (follicles) which after a month or so after flowering dry to release the minute dust-like seeds which are dispersed by wind and water. 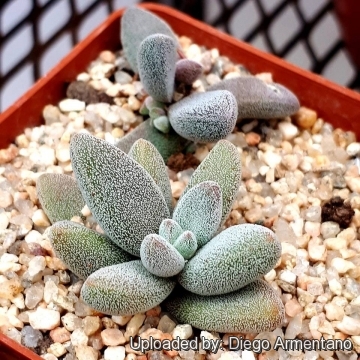 Crassula tecta Photo by: Diego Armentano
Send a photo of this plant.

Cultivation and Propagation: Crassula tecta is a diminutive and attractive grey-leaved succulent that is easy to grow and makes a great pot plant. It requires a free draining compost and good light to keep the plants compact and encourage leaf colour and flowering.
Water requirements: Extreme care is needed when watering these plants, remember not to over-water in the Summer when they're taking their rest. In cultivation they are spring and autumn grower (summer dormant). When there is too much water available in combination with too less light, the leaves won't form dense rosettes anymore and you will see a piece of stem between the leaves which will make the sight less pretty. Reduce watering during winter month , fairly drought tolerant elsewhere. The white papillose leaf coatings of the plants in our collection sometime is not so intense as those of the plants in their natural habitat but the difference in coating is thought due to the higher humidity and less intense sunlight of our climate.
Pest and diseases: Crassulas are sensitive to mealybugs.
Propagation: Seeds of stem cuttings.