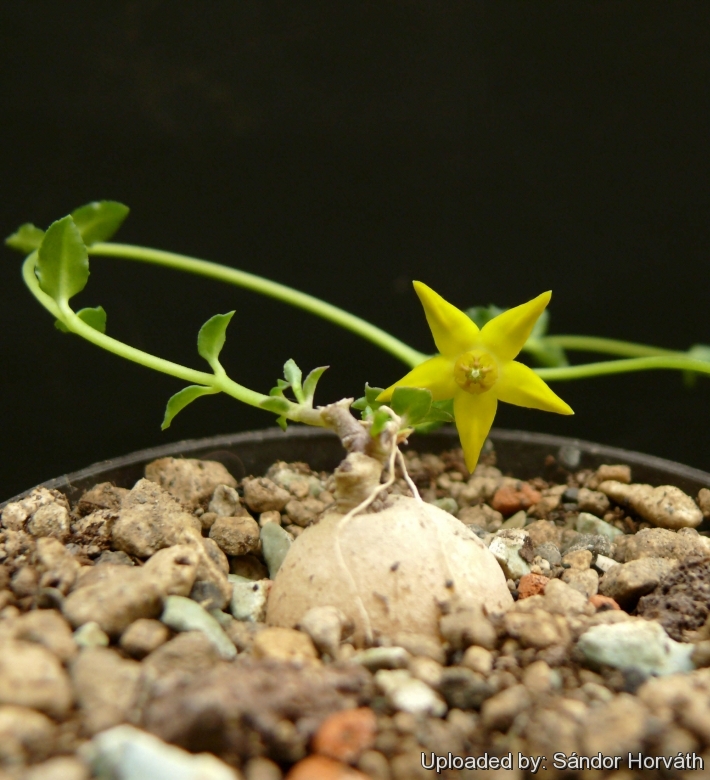 Origin and Habitat: Repubblic of South Africa, Eastern Cape, Range Stutterheim to Engcobo and Umtata. Extent of occurence11 300 km², known from fewer than ten locations.
Altitude range: 300 - 1600 metres above sea level.
Habitat and Ecology: Grassland on dolerite rock outcrops. Brachystelma caffrum is threatened by habitat degradation and habitat loss. Much of the suitable habitat in the Stutterheim area has disappeared under exotic timber, but the largest expanses of habitat have not been forested since they are too rocky for trees. In addition to forestry, the region is well stocked with sheep and cattle, but B. caffrum, which is a prostrate species, is hardly grazed since it is usually found where cover is very short. The only damage done is when animals damage shallow tubers whilst walking There have been observed declines at some of the known subpopulations as a result of rooting and predation by invasive pigs. The population trend is decreasing. B. meyerianum and Brachystelma caffrum are often found growing together where their distributional range in the Eastern Cape overlaps. Both species frequent rocky hilltops and, although they occur side by side at times, there are some differences in the micro-habitats occupied by the two plants. B. caffrum grows in very densely packed colonies at the edges of sheets of exposed rock or else on shallow swards of soil on flat expanses of exposed rock and on stony ground, in short grass surrounding these rocky areas. B. meyerianum shows a preference for gently sloping soil at the edges of sheets of rock or else vertical and angled cracks and crevices on more sharply sloping ground. Where the two species occur together, B. caffrum generally outnumbers B. meyerianum. The two species are difficult to distinguish superficially in the field unless in flower, since their habitat and foliage is similar, but despite the proximity to one another hybrids have not been seen.

Description: Brachystelma caffrum is a dwarf perennial herb with a depressed-globose tuber (caudex), with a long neck, dividing into numerous procumbent branching minutely scaberulous stems to 12 cm long. The tiny flowers are vivid yellow, star-shaped, mostly upright and numerous.They give out an intense cow-dung-scent from midday until the early afternoon and when in full bloom attract flies in large numbers throughout the hotter part of the day, if the weather is sunny.
Derivation of specific name: The specific name 'caffrum' comes from the the old name 'Caffraria' for S Africa, referring to the place of origin of this plant.
Tuber (caudex): Roundish, 50-70 mm diameter, flattish to depressed and often with a short or long underground neck.
Stems: Numerous, slender, diffusely spreading, becoming procumbent, branching 5 - 12 cm libg, minutely scaberulous.
Leaves: Stalked short, arranged in an alternate or opposite position, 4-16 mm long, including the very short petiole, 3/4–4 1/2 lin. broad, blade variable mostly ovate or the upper lanceolate and some of the basal orbicular-ovate, acute, rather thick, glabrous, minutely and stiffly ciliate, with the midrib beneath scaberulous, more rarely with the undersurface slightly scaberulous.
Inflorescence: Sessile lateral at the nodes, flowers solitary or rarely in pairs. Pedicels 15-30 mm long, slender, erect, hispid. Sepals 1.5-2 mm long, lanceolate, acute, sparsely scaberulous. Corolla rotate, star shaped, lobed to about 2/3 of the way down, 7-13 mm in diameter, fleshy, bright clear yellow, smooth without a distinct tube, outside papillate. Corolla lobes free, 3-5 mm long, 2-3.5 mm broad, ovate-triangular, acute, flat, glabrous, sometimes with minutely ciliate margins. Corona sessile, greenish-yellow, c. 2 mm tall, 3 mm in diameter, campanulate, united and nearly urceolate. Outer corona-lobes very short, closely contiguous, forming a thick fleshy truncate ring not exceeding the staminal column, from which the linear obtuse inner corona-lobes are inflexed upon the backs of the anthers and do not exceed them, all yellow. Staminal column 1.5 mm long.
Blooming season: Brachystelma caffrum generally has a sharply denned flowering period in habitat, generally the last two weeks of October and first week in November.
Fruits (follicles): One or two follicles per flower, fusiform, erect, subparallel or slightly diverging, about 4 cm long, 3 mm thick, terete, tapering into a long beak, smooth, glabrous. Pollinia D-shaped. Follicle production is very variable, ranging from almost non-existent in some years to up to about ten paired follicles per plant in good seasons. It seems probable that the flowers, even when prolific and at their peak, may not emit enough odour to attract sufficient flies for pollination. The follicles mature quickly and seed is liberated during December and January.
Seeds: Nearly 6 mm long, 2 mm broad, narrowly ovate or ovate-lanceolate, somewhat concave on one side, smooth, glabrous, light brown, with an ochraceous margin; odour disagreeable. null
Similar species: Brachystelma caffrum is closely related with Brachystelma decipiens. 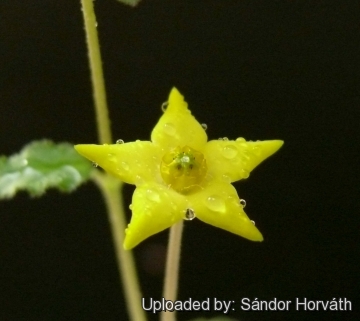 Brachystelma caffrum Photo by: Sándor Horváth
Send a photo of this plant.

Cultivation and Propagation: In cultivation the plants are usually grown in semi shade, with the tubers wholly or (preferably) partially exposed to prevent scorching and rotting of the roots. This plant can take a good deal of water during active growth and should be watered only when not dormant. Keep dryish in winter. It should be overwintered in the greenhouse at temperatures over 12°C (avoid letting temperatures drop lower than 5° C). Use a very draining but rich soil. An error in cultivation may produce unsightly holes in the tuber.
Reproduction: This species can be reproduced by seeds. Sow seeds in summer in a well drained medium.