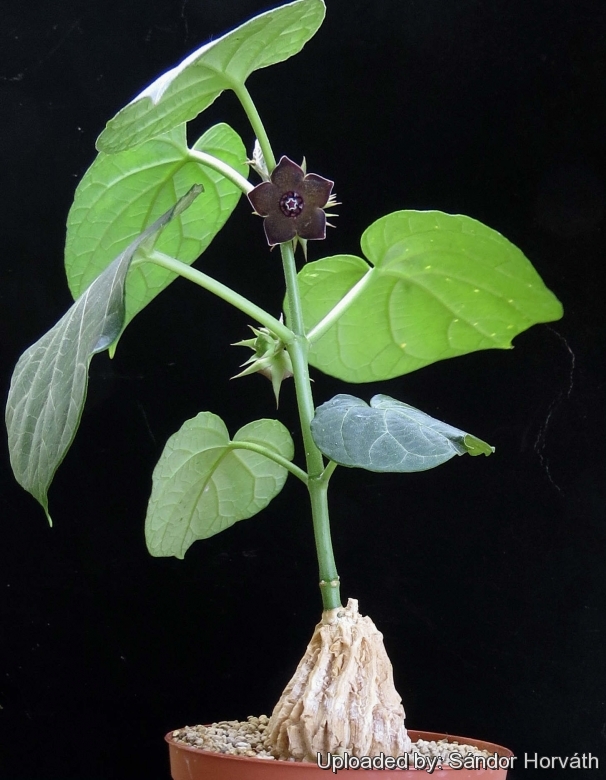 Origin and Habitat: Matelea cyclophylla has a wide range of distribution in western Mexico, from Jalisco (in the north) trhogh Oaxaca and Guerrero down to Chiapas (in the south). Matelea cyclophylla is an elusive plant with sparse populations.
Altitude range: 500-1000 metres above sea level.
Habitat and ecology: Tropical deciduos and subdeciduos forest in the shade of rocks and fallen logs in association with Mammillaria tolimanensis and Mammillaria albilanata. This species occurs on limestone cliffs and at El Huisichi ravine near Tolimán, and in Jalisco on volcanic cliffs. The invisibility of such plants in their home is really remarkable and in the dry season they camouflage to such an extent that they can only be spotted by the keenest eye.

Description: Matelea cyclophylla is a rare and unusual deciduous Mexican caudiciform vining asclepiad cultivated mostly for its caudex to 15 cm across resembling that of a diminutive Dioscorea macrostachya (also from Mexico) or Dioscorea elephantipes (from S. Africa) covered with angular soft, corky tubercles. But the vining growth that arises from the caudex during the rainy season and shortly after, looks more like a pubescent green-bean plant. The flowers are approx 2.5 cm in diameter burgundy coloured and, as many other asclepiads that use flies as pollinators, smelling like carrion. Pure green flowering plants are not unusual in cultivation. They come in summer. If they are pollinated they produced horn-like seed pod ( follicles) that open up and disperse the seeds
Derivation of specific name: The specific name derives from the Greek noums cyclos (κυκλοϛ ) circle, ring, disk and phyllon (φυλλον) leaf; foliage. Round-leaved.
Root tubers (caudex): Semi‐subterranean the size of coffee mugs, covered with tan, angular soft, corky tubercle. The tubers in habitat grow almost completely buried in the ground, but most people grow Matelea cyclophylla with the magnificently corky tuber raised for viewing.
Annual stems: Herbaceous, climbing or trailing.
Leaves: Heart-shaped, slightly fleshy.
Flowers: Burgundy coloured on some plants and green on others, bizarre and beautiful, typical of the Asclepiadaceae, 2.5 to 5 cm wide. They resemble a bat sea-star with five short corolla lobes. The corolla surface is pubescent and usually a deep maroon, though green forms also occur. The coronas (reproductive structures at the center of the flower) are also its aesthetic focus, meriting a closer look with a lens. They appear as a white-bordered red star atop a dark maroon cage-like corona.
Hystory: It was found by J.N. Rose and J. Painter at the Mano Negra canyon near Iguala, México in the early 1900's and described by P.C. Standley in 1924 as Vincetoxicum cyclophyllum and finally transferred to Matelea cyclophylla by Robert Woodson in 1941. It is sometimes grown under the nomen nudum (a name not validly published) of Gonolobus cyclophyllus. 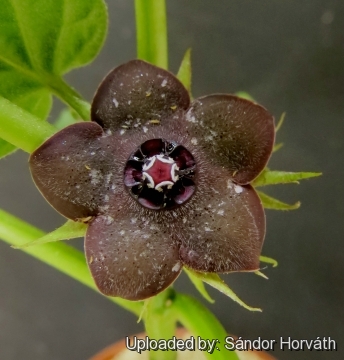 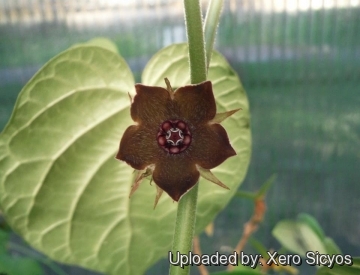 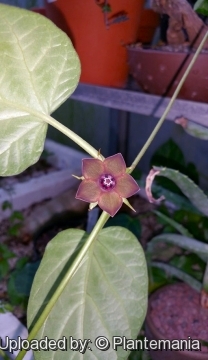 Matelea cyclophylla Photo by: © Plantemania
Send a photo of this plant.

Cultivation and Propagation: Matelea cyclophylla is an interesting readily grown addition to a collection, but rarely seen in cultivation. Dormant and leafless during colder months when it should be kept totally dry. When grown outdoors, temperatures under 15° C damage the plant.
Growth rate: It grows well, though slowly, but it possible to increase the speed of growth to some extent by providing adequate amount of water, warmth, and fertilizer during the active growing season, but it’s susceptible to rotting if too wet.
Exposure: It needs light shade, but the caudex should be in the shade, while the leaves prefer some sun. Avoid direct blasting sun in summer. Bright light if grown indoors.
Soil: In pots it needs a very porous potting medium (add pumice, vulcanite, and perlite). It does better in a rather acidic soil.
Waterings: Water frequently while plant is in full growth, but keep dry during the winter after the branches have died back. It rot easily and do NOT like a lot of water when it has no leaves.
Fertilizer: Benefits from moderate doses of a well-balanced, slow-release fertilizer.
Frost tolerance: Due to its tropical or subtropical origin keep warm in winter, the minimum safe average temperature is 15°C, although it can go lower for short periods. It can be grown outdoors in frost-free climates, need anyway to kept above 10°C and very dry in winter. It is very prone to rot in cool, wet conditions. USDA Zone 10-12, but does very well in containers.
Manteinance: Repot every two years. It like pots with generous drain holes. In the winter, the vining branches die back and should be cut back to encourage branching, to maintain an attractive shape and to ensure caudex habit.
Propagation: Propagation is achieved by seed germination at 35° centigrade.