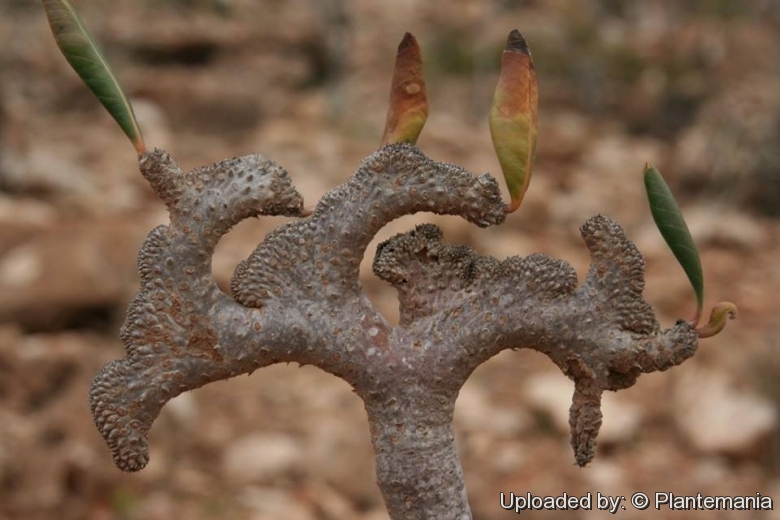 Origin and Habitat: Adenium obesum ssp. socotranum (Adenium socotranum) is endemic from from the isolated island of Socotra in the Indian Ocean south of the Arabian peninsula and east of the Horn of Africa.

Description: The standard Socotran desert rose, Adenium obesum subs. socotranum, long popular because of its large size and unique architecture is, perhaps, the more famous of all adeniums. It is the giant of the genus, forming a massive conical trunk/caudex several metres tall and up to 2.4 m in diameter, the whole plant up to 3,5 meter in height. It resembles a miniature baobab with surrealistic forms. Some turn into tall trees while some may grow with their swollen bases more flat on the soil. These beautiful crested forms (Adenium obesum subs. socotranum f. cristata) are very rare in collection and highly priced for their odd shape and size.

Notes: The cause of cresting is not fully explained; biologists disagree as to why some saguaros grow in this unusual form. Some speculate that it is a genetic mutation. Others say it is the result of lightning strike or freeze damage, but whatever the stimulus, the growth point of the stem has switched from a geometric point, to a line, which folds and undulates as the crest expands. Though these crested saguaros are somewhat rare (1 in 250,000), cresting occurs naturally throughout the range of the Saguaro, and can be encountered in many other cactus species.
In the ontogenesis a crest can appear any time, but development of crests on large species (such as the desert rose Adenium obesum) in the early stages of ontogenesis is unlikely and crested stems form occasionally only on the terminal branches of older specimens. 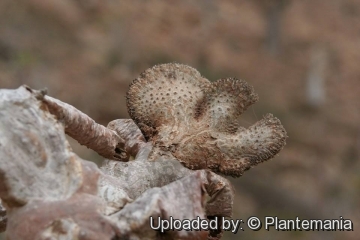 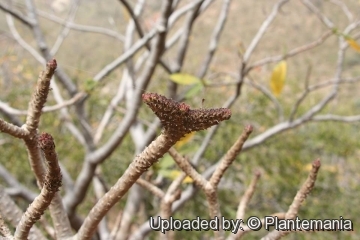 Cultivation and Propagation: The crested desert rose grow very slowly and are cold intolerant. Make sure that your desert rose are not exposed to cool temperatures, or they may die. The plant needs a well drained soil mix. Water regularly in summer, but allow to dry fully before watering again. The total watering needed is similar to other succulents, and it will lose leaves if overwatered. During the winter months they should be dry. Since they are big sized plants, they need plenty of space for their roots. Repotting should be done every other year, or when the plant has outgrown its pot. Needs lots of fresh air.
Exposure: Light shade when young, full sun later.
Temperature requirements: Keep in a bright location in winter (minimum temperature 12-15° C). However, in the winter, keeping it cool gives the plant a needed rest. In summer, if possible, move outdoors to a sunny or partly shaded location.
Propagation: Grafting, since cutting root hardly.