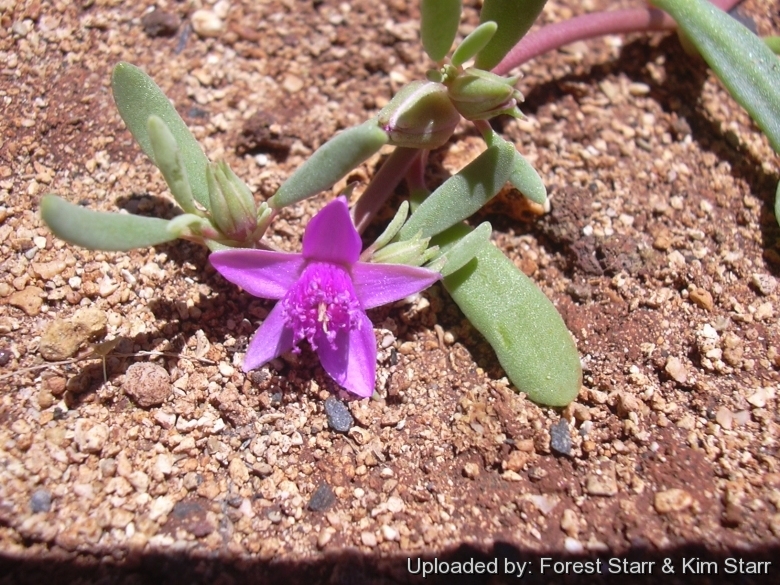 Origin and Habitat: Sesuvium verrucosam is native to the Americas, where it can be found in the southwestern quadrant of the United States (California, Oregon, Baja California, east to Utah, Kansas, Texas) and northern Mexico, it also occurs in southern Brazil. It is naturalized in the Arabian peninsula (eastern Saudi Arabia, Bahrain) and elsewhere in the world.
Altitude range: 0–1000 metres above sea level
Habitat and ecology: Sesuvium verrucosum a highly salt tolerant succulent halophyte that grows in many types of low-lying saline, semi-saline or alkaline habitats on the coast bordering the mangrove and margins of estuaries but not in tidally inundated or marine habitats, and inland, including salt marshes and other saline wetlands, moist or seasonally dry alkali flats, desert playa lakes, drying desert washes, agricultural areas, waste places, and abandoned fields. It is a less widespread species than the Suaeda depressa and Salicornia rubra salt pan communities. S. verrucosum is one of the most salt tolerant species occurring in inland North America, commonly occurring in pure stands or sometimes associated with Suaeda depressa. It has been reported as a pioneer species in saline soils of Oklahoma by Ortenburger and Bird . In central Kansas it behave like an annual, elsewhere throughout its range it is described as a perennial herb.

Description: Sesuvium verrucosum known by the common names western sea-purslane and verrucose sea-purslane is a glabrous much-branched succulent herb to c. 30 cm or more high, forming a mat up to two metres wide. The herbage is often red-green, finely verrucose and covered densely in crystalline, hemispherical papillae (bumps). It produces peculiar flower with rose-colored sepals, and no petal. It may behave both like an ephemeral or short-lived perennial. Sesuvium verrucosum is widespread and variable.
Stems: Many, finely verrucose, prostrate, not rooting at nodes up to a metre long, radiating from a weak taproot on ephemeral or first-season plants, and from a basal caudex on perennials.
Leaves: Mostly opposite, subsessile to short petioled, narrowly to broadly spathulate, of varying shapes, succulent and thick but conspicuously flattened, 1,5-5 cm long, 2-10 mm wide, papillate with crystalline globules abundant, glabrous, , rounded or acutish at apex, the leaf bases flared and clasping with broadly winged, membranous margins.
Flowers: 8-11 mm in diameter, mostly solitary in the leaf axils, sessile or subsessile (pedicel less than to 2 mm). They have no petals, but the five petal-like sepals that are thick and succulent, (2-)4-6(-10) mm long, generally bright pink to reddish or orange inside, greenish at back, ovate-lanceolate, margins scarious, shallowly hooded, back prolonged into short beak 1-1.5 mm long near apex with a thick, crystalline-verrucose outer surface. At the centre of the flower is a ring of approx 30 stamens around the central ovary. The filaments connate in proximal 1/2, pink or redddish, fleshy (appearing flat or winged when dry), the anthers often bright magenta. Pistil 5-carpellate.Ovary 5-loculed. Styles 5.
Fruit (capsule): About 3-3.5 mm. in diameter, 4-5 mm. high, ovoid-globose, opening by a conical lid and containing 20–40 seeds.
Blooming season: Spring to Autumn (March-Nov.).
Seeds: Dark red-brown to black, reniform-obovoid, markedly broader above the middle, smooth and shiny, 0.8-0.9 x 0.65-0.7 mm, not conspicuously notched. Funiculus persistent.
Similar species: Several names, including Sesuvium sessile Persoon, have been applied or misapplied to this species, which can resemble Sesuvium portulacastrum. It differs from Sesuvium portulacastrum in having sessile or occasionally pedicellate flowers and in lacking roots at stem nodes. Moreover the stems and leaves of S. verrucosum are generally not as thick and succulent as those of S. portulacastrum. 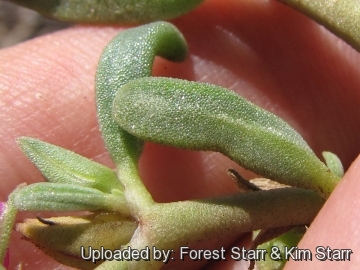 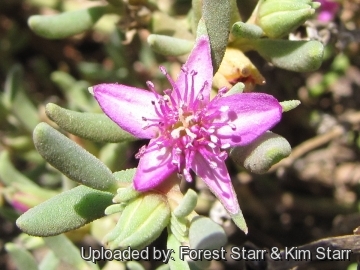 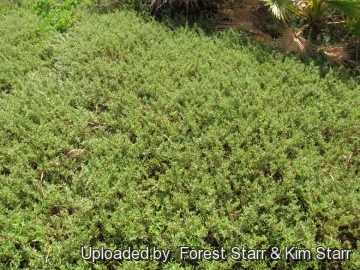 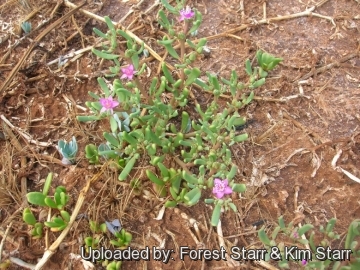 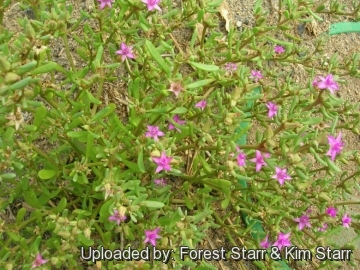 Cultivation and Propagation: The plants in this genus represent some of the more easily cultivated succulent species.
Water: Water moderately from early spring to the end of autumn, and keep the compost quite dry when the plants are dormant watering, only if the plant starts shrivelling (, but they will generally grow even in winter if given water). Outdoors does not require any supplemental water once established.
Soils: It grow in dry, moist or wet soils and can even grow directly in water. It adapt to almost every kind of substrate comprising: clay, sand, cinder, limestone, organic and coral either acidic, neutral and basic (alkaline).
Fertilization: It has low nutritional requirements and grows well in nutrient poor soils. But for an healthy cultivation follow a low fertilizing regiment (but this is not necessary for plants in water features) An application slow release fertilizer with minor elements every six months. Foliar feeding with a water-soluble or an organic fertilizer at one-third to one-fourth the recommended strength monthly has proved beneficial.
Exposure: Full sun is optimal but tolerates some shading for part of the day.
Salt Tolerance: It tolerates flooding by salt water and is a pioneer species that grows in unconsolidated substrate in direct salt wind and spray.
Hardiness: In areas prone to frost, grow in an intermediate greenhouse or conservatory, in pots of cactus compost. Provide maximum light all the year round.
Maintenance: Prune it to keep confined to growing areas.
Environmental recovery: Sesuvium verrucosum is one of the most salt-tolerant plants adapt to saline, semi-saline or alkaline habitats.
Gardening: It is an easy-to-grow groundcover, ideal for low-maintenance and water-wise gardens, for beach areas, saline soils, xeric landscaping and around water features where it does tolerate some foot traffic. But like most plants constant foot traffic will eventually cause irreparable damage. It is also a nice container plant that should be given full sun and regular watering.
Pests & disease: This prostrate groundcover is prone to slug and snail attacks.
Propagation: Seeds or cuttings. Seeds can be sown in early to mid-spring and germinated in heated humid environment. Alternatively, use stem cuttings taken towards the end of summer.