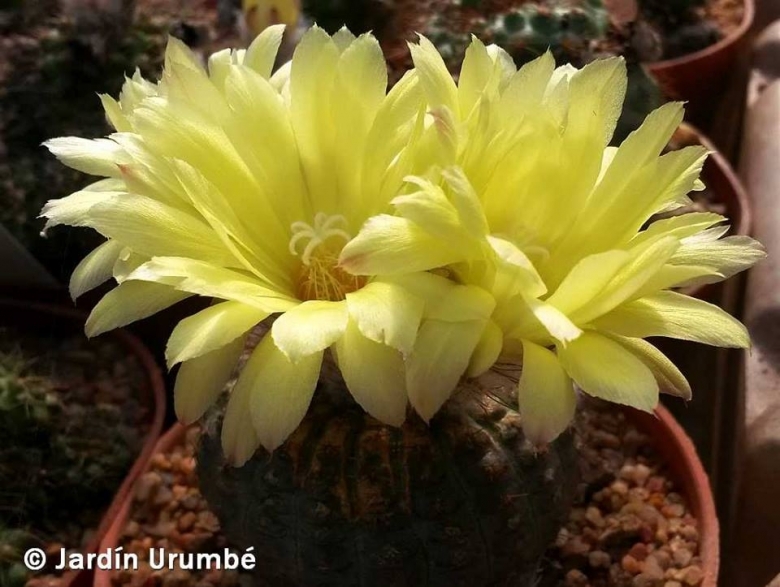 Origin and Habitat: East of Porto Murtinho, North of Rio Apa, Mato Grosso del Sur, Brazil.
Altitude range: 120-145 metres above sea level.
Habitat and ecology: Frailea cataphracta subsp. melitae grows in partial shade, under bushes and small shrubs together with Gymnocalycium damsii, Echinopsis spec., Harrisia bonplandii, Cereus kroehnleinii, Cleistocactus baumanii and Stetsonia coryne. The substrate is clayey and fairly compact. This species previously believed extinct was fortunately found again, in multiple locations and in large number. The reason for such belief is due to the fact that often in habitat, during the dry season the small plants are not found, because they are completely buried in the ground and almost invisible.

Description: Frailea cataphracta subsp. melitae (firstly described as Frailea melitae by Buining & Bredero in 1974) is a local or morphological form of Frailea cataphracta subs. duchii. It has less than 21 flattened, but noticeably tuberculate ribs (in subsp. duchii the ribs are less than 18). However the distinguishing characteristics of subsp. melitae, appear to fall within the natural variation of subs. duchii, and the two plants are not readily distinguishable, if not for the geographical provenance. More likely they are one and the same species.
Derivation of specific name: This member of the Cactaceae family was given this name for Melita Horst, wife of the Brazilian plant collector Leopoldo Horst.
Stem: Solitary, not clumping, globular, rootstock conical sunk into the earth, 1.5 cm tall and to 4 cm in diameter, dark olive-green to brown or purplish.
Ribs: Up to 21, quite flat divided by transverse depression into tiny tubercles, darker V-shaped , blots can be seen below the areoles.
Areoles: With conspicuous, glassy white wool, later glabrous.
Spines: Thin, straight, glassy white, a little stronger and light brown at the base, deciduous or persistent. Radial spines pectinated up to 4 on each side, 3 to 4 mm long, at times with a small central spine 3 mm long.
Flowers: Funnel-shaped, 27 mm long and up to 37 mm wide when open, shiny golden yellow. Corolla tube, with tawny hair and up to 8 mm long bristles overgrowing the receptacle. Inner wall of the receptacle red at the base, outer receptacle wall covered with scales, bristle and hair. Petals, golden yellow, spathulate, pointed at the ends, upper margin finely notched. Style white. Stamens white, red in the lower part. Anthers yellow.
Fruit: Fruits 9 mm long, 8 mm wide covered by light yellow bristles and white hairs.
Seeds: Cap-shaped, 2 mm long and 1.5 mm wide, smooth and shiny, brown.

Subspecies, varieties, forms and cultivars of plants belonging to the Frailea cataphracta group 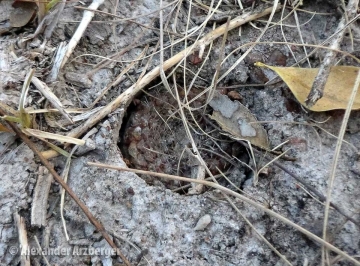 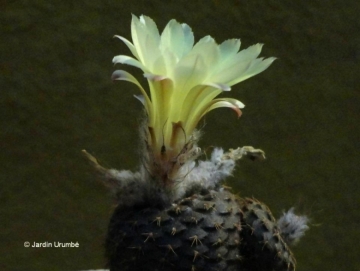 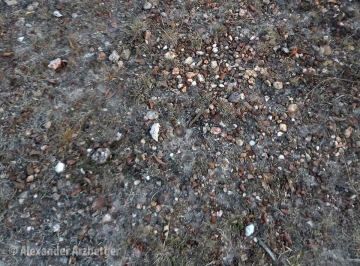 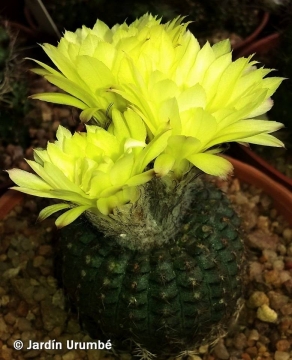 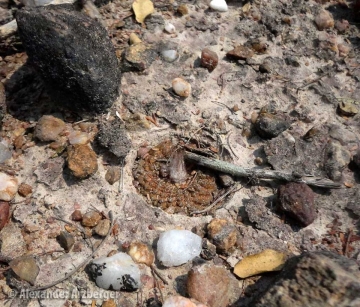 During the dry season, the plants go hidden almost beyond the surface. Photo by: Alexander Arzberger 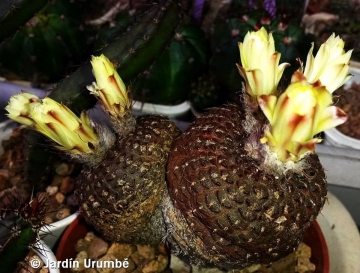 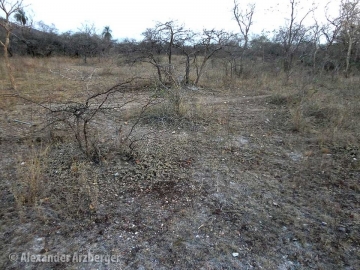 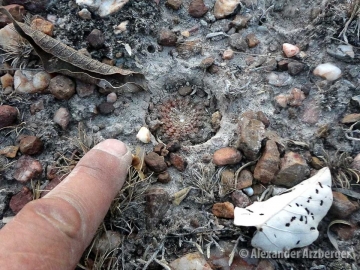 Cultivation and Propagation: Frailea melitae is a summer grower species relatively easy to grow. It is sometime seen as a grafted plant but grows very well on its own roots too. Characteristically, during the dry season plants retract completely under the ground both in the wild and in cultivation too.
Growth rate: Fraileas are relatively short-lived plants, only lasting few years (rarely more than 10-15 years in cultivation) and, possible annuals in habitat! In fact they reseed readily around the base of the mother plant from self-set seed if kept reasonably moist during warm weather. It is a
good idea to keep restarting them from seed; what looks like a healthy big plant may suddenly die of old age without warning.
Soil: Use mineral well permeable substratum with little organic matter (peat, humus), plants may become too elongated if compost is too rich.
Repotting: Re-pot every 2 years. Use pot with good drainage.
Fertilization: It grows much faster with a low nitrogen content fertilizer in spring and summer. Potassium helps maintaining the plants compact and healthy.
Watering: Requires careful watering to keep plant compact. Water sparingly from March till October, the thin, fibrous roots suffer if there is humidity, therefore the plant should be watered only when the surrounding terrain is dry. Keep dry as soon as the temperature starts dropping in October and keep it perfectly dry in winter at temperatures from 5 to 15 degrees centigrade. High nocturnal humidity promote growth.
Hardiness: They need a minimum temperature of 5-10° C (but occasionally temperatures of a few degrees below 0° are not dangerous if kept on the dry side prior to, and during, cold weather). It tends to rot in winter during the resting phase, if kept wet. In the rest period no high atmospheric humidity!!
Sun Exposure: Light shade to full sun, its colour tends to richer and darker when grown in light shade. In a shaded position the plants grow faster, but are not flat shaped and dark coloured.
Uses: It is an excellent plant for container growing. It always looks good and stays small.
Pests & diseases: It may be attractive to a variety of insects, but plants in good condition should be nearly pest-free, particularly if they are grown in a mineral potting-mix, with good exposure and ventilation. Nonetheless, there are several pests to watch for:
- Red spiders: Red spiders may be effectively rubbed up by watering the infested plants from above.
- Mealy bugs: Mealy bugs occasionally develop aerial into the new growth among the wool with disfiguring results, but the worst types develop underground on the roots and are invisible except by their effects.
- Scales: Scales are rarely a problem.
- Rot: Rot is only a minor problem with cacti if the plants are watered and “aired” correctly. If they are not, fungicides won't help all that much. To prevent rottenness it is also advisable to surround its root neck by very rough sand or grit, this help a fast water drainage.
Propagation: With fresh harvested seeds or (rarely) by grafting. Fraileas set seed (when well grown) and grow easily from seed. In fact, they are reported to set seed even if the flower doesn’t open. This self-fertilization is called cleistogamy. Seedlings dislike strong light and dry conditions and need to be repotted frequently during the first few years. However, old plants become senile and have a tendency to succumb to disease and a weak root system. At this stage, as is well known, they die suddenly. So, after they reach about 4-5 cm in diameter grow them slowly, and adopt a new repotting period, using intervals of every 3-4 years. Additionally grow them under drier conditions or with stronger sunlight. But plants are sometine grafted to accelerate growth, but the grafted plants are typical rather tall growing, compared with plants on their own roots that are usually more flat to the ground.