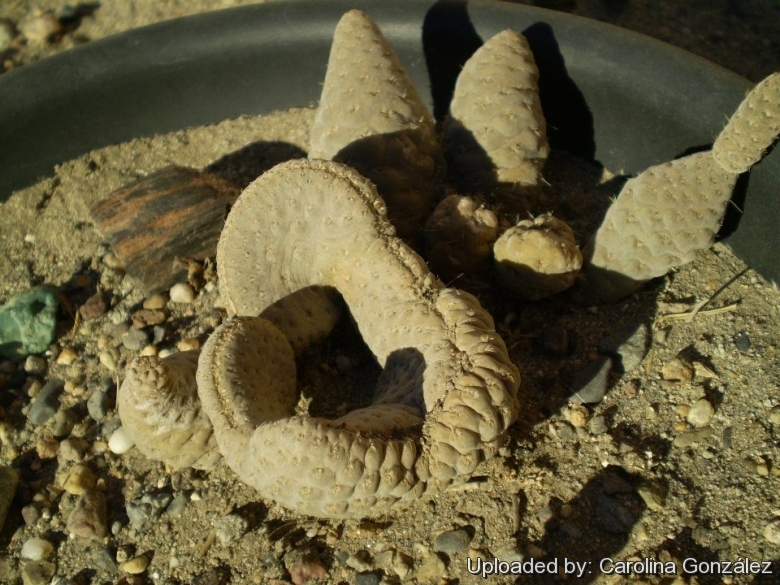 Origin and Habitat: Pterocactus araucanus is endemic to the Arauco area, Neuquén, west of Río Negro and north west of Chubut provinces (western Patagonia), Argentina.
Altitude range: This species grows at altitudes between 200 and 600 metres above sea level.
Habitat and Ecology: This cactus grows on sandy plains and is relatively frequent where it occurs. The land is constantly swept away by the cool wind that pulses across the dry northern fringe of Patagonia. Here on this high plateau, there is little resistance and the small stressed stems of Pterocactus araucanus are often partially covered by the sand that is diffused by the pulsing wind. In autumn the plants lose some their aerial parts (segments) in a controlled way using a layer of bark to seal the subterranean, living root-stock or keep their branches alive until harsh conditions kill them. In severe droughts, all the aerial green shoots die back to the underground rootstock. Once rains return, the rootstock produces new green shoots that grow upward until they reach the soil surface. Pterocactus araucanus is listed as Least Concern because it has a wide range, is locally abundant, is present in several protected areas and is not facing any threats.

Description: Pterocactus araucanus is a geophyte cactus with a massive underground tap-root, and several deciduous stems with spines not covering them. This plant grows in sandy soil, with almost the entire plant underground. P. araucanus is one of the best-loved species in cultivation because it is not supposed to have glochids.
Crested form: The crested (Pterocactus araucanus f. cristata) is a very rare, slow-growing and highly priced crested cactus forming odd sculptural shapes. In crested plants the growth point of the stem has switched from a geometric point, to a line, which folds and undulates as the crest expands. Though these crested Pterocacti are somewhat rare, cresting occurs naturally throughout the range of the of the species,and can be encountered in cultivation too.
Roots: This species forms thick rootstocks constricted at the collar that help to survive the dry periods.
Stems: Its stems fan out, some will form stable crests while others (the more common) make both crested and normal stems. Epidermis grey-brown. The whole plant up to 10 (or more) cm wide.
Areoles: Elliptical, 2 mm long and 1 mm wide.
Glochids: Usually absent, but in some forms a few glochids may appear after the juvenile stage.
Spines: About 8, pectinate, yellowish with darker tips, to 3 mm long. Sometime a long and powerful central spine is produced in the centre of developed segments.
Flowers Diurnal reddish brown, opaque, 3-4 cm in diameter. The flowers are terminal produced from the apex of new growth. Stamens and style are yellow.
Blooming season: Summer.
Fruits: Borne apically, dry at maturity, globose, 2 cm in diameter, transversely dehiscent at apex.

Subspecies, varieties, forms and cultivars of plants belonging to the Pterocactus araucanus group 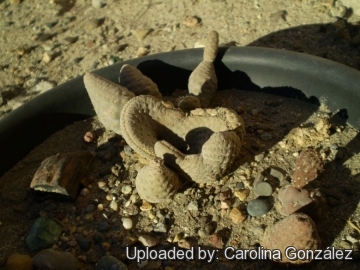 Cultivation and Propagation: Pterocactus araucanus is easy to grow, provided it is kept cool, but dry during autumn and winter. It is a particular favourite of caudiciform plant enthusiasts.
Crested growth: Unlike 'monstrous' varieties of plants, where the variation from normal growth is due to genetic mutation, crested growth can occur on normal plants. Sometimes it's due to variances in light intensity, or damage, but generally the causes are unknown. A crested plant may have some areas growing normally, and a cresting plant that looks like a brain, may revert to normal growth for no apparent reason. If you have any of the crested part left you need to remove the normal growth and leave the crested part behind this will need to be done regularly.
Potting medium: Use a cactus mix or add extra perlite or pumice to regular soil potting soil. A gritty, very free-draining compost is suitable, and clay pots help the plants to dry out between watering. For best results, use a deep pot.
Fertilization: Need a perfect fertilizer diet in summer. Use preferably a cacti and succulents fertilizer with high potassium content including all micro nutrients and trace elements or slow release fertilizer.
Watering Needs: Water normally in the growing season from March to October. No water should ever be allowed to stand around the roots. Keep almost completely dry in winter. The swollen caudex makes it very tolerant of under watering.
Hardiness: It is quite frost resistant if kept dry, hardy as low as -15° C. It can be grown outdoors in the summer months to benefit from direct exposure to light, and especially exposure to high summer temperatures. Recommended Temperature Zone: USDA 9-10.
Sun Exposure: It is essential to give full sun; otherwise they will become atypical. If grown in full sun, the new growth will flower profusely in spring and summer.
Rot: Rot it is only a minor problem with pterocacti if the plants are watered and “aired” correctly. If they are not, fungicides won't help all that much. The plant turns immediately to mush when over watered, or watered out of season. Care must be given in watering, keeping them warm and wet while growing, and cooler and dry when dormant.
Maintenance: Most of the slender stems become detached during winter, but some advise to help the plant by pruning all the top growth in autumn, to encourage it to produce stems with terminal flowers in the spring.
Reproduction: Seeds or cuttings. The seed should be planted in spring. Germination usually occurs within about one week to one month. Seed germinate at 15-21 °C.