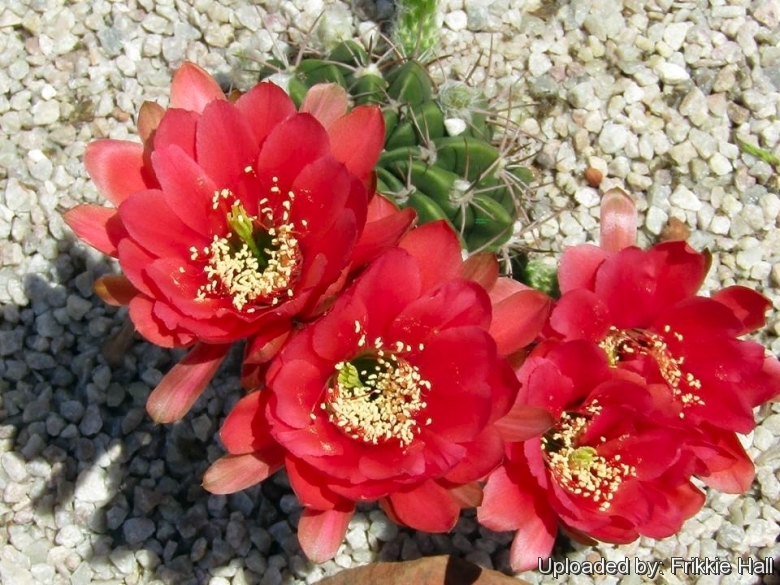 Origin and Habitat: Echinopsis obrepanda subs. calorubra is endemic to Bolivia, where it occurs in Cochabamba between Comarapa and San Isidro.
Altitude range: This species grows at elevations of 2,400 to 3,000 metres above sea level.
Habitat and Ecology: The species grows in prepuna and high altitude grasslands. The species is locally abundant, and seed recruitment seems to be high. The population trend is stable. The main threats are agriculture and urbanization, specifically the expansion of Cochabamba city.

Description: Echinopsis obrepanda subs. calorubra (firstly described as Echinopsis calorubra by Cárdenas in 1957) is a distinct subspecies of the widespread and variable Echinopsis obrepanda. It has a single central spine to 2.5 cm long, 9-13 radials, and very showy orange-red to dark red flowers up to 15 cm long.
Stem: Up to 6-7 tall and 14 cm across.
Ribs: 16.
Central spine: 1, up to 2.5 cm.
Radial spines: 9-13, somewhat curved.
Flowers: Up to 15cm inner segments orange-red above, bluish pink towards base.
Taxonomic note. The taxonomic boundaries of this species are still object of debate, some authors think that Echinopsis calorubra should be placed under the name Echinopsis rauschii H.Friedrich, and should include Echinopsis rojasii Cárdenas. According to Hunt et al. (2006) the concept of E. calorubra also includes Echinopsis cardenasiana (Rausch) H.Friedrich.

Subspecies, varieties, forms and cultivars of plants belonging to the Echinopsis obrepanda group 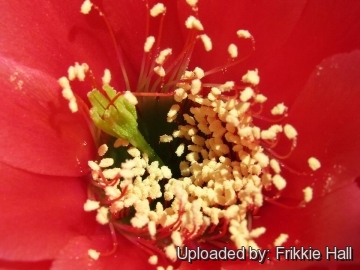 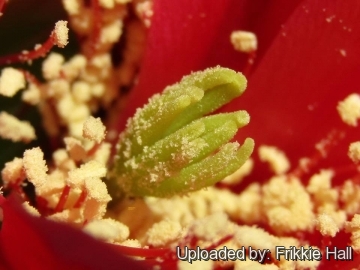 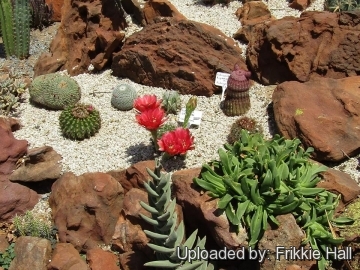 Cultivation and Propagation: The Red Easter Lily Cactus is a summer grower species that offers no cultivation difficulties. Water regularly in summer (but do not overwater ) needs good drainage and very porous soil, keep rather dry in winter. Feed with a high potassium fertilizer in summer. It is quite frost resistant if kept dry (hardy to -7° C). Need a bright exposure, full sun or half shade in summer.
Propagation: Direct sow after last frost, offsets.