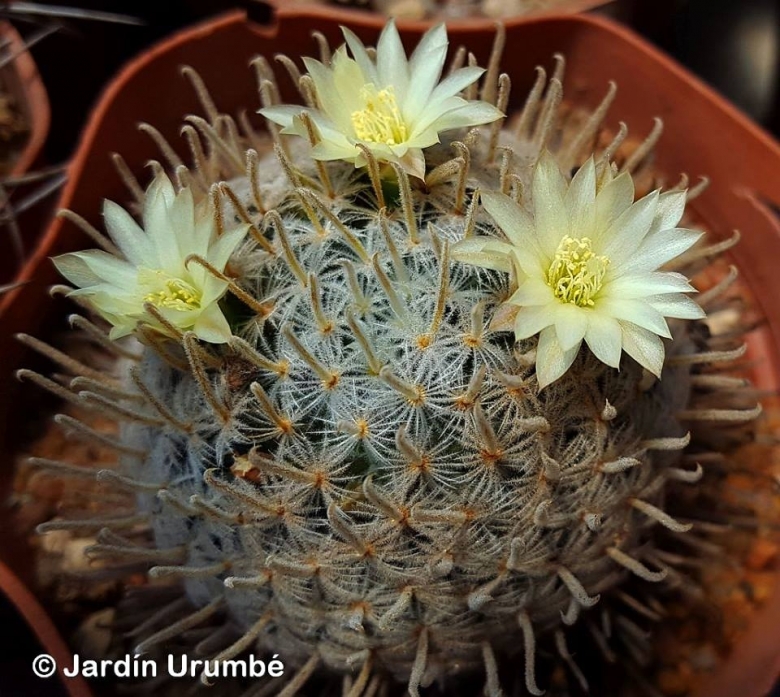 Origin and Habitat: This species is found at one location northeast of the city of Guanajuato, Mexico (extent of occurrence and area of occupancy 35 km2).
Altitude range: 1.800 - 2.000 metres above sea level.
Habitat: This species is found on volcanic rock in xerophyllous scrub. Mammillaria duwei is known from only one location, has a small population size, and there is a continuing decline due to overcollection and development. The southernmost of the two known subpopulations of this species has declined as a result of collecting over the past 15 years. Currently the total population is estimated at approximately 500 individuals.

Subspecies, varieties, forms and cultivars of plants belonging to the Mammillaria crinita complex

Notes: This plant is a member of the Mammillaria crinita complex (Stylothele Series). Only some authors consider Mammillaria duwei to be a good species; the others classify it as M. crinita (e.g. According to Anderson's classification, this species is considered as a synonym of Mammillaria crinita) 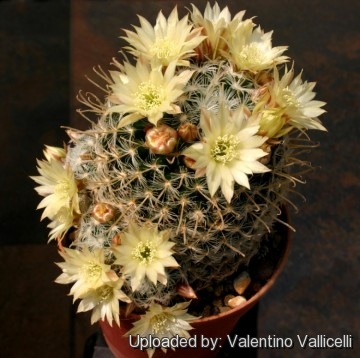 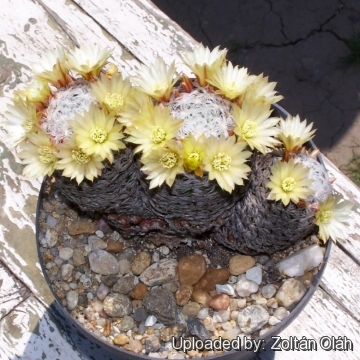 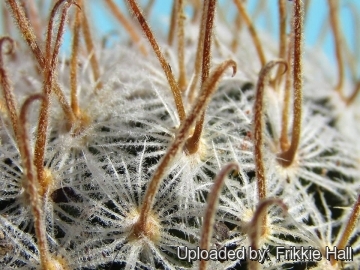 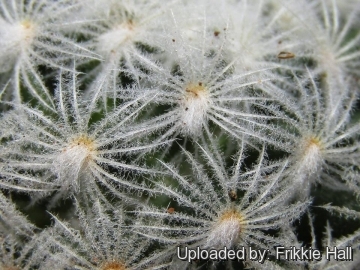 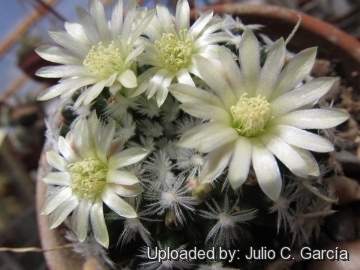 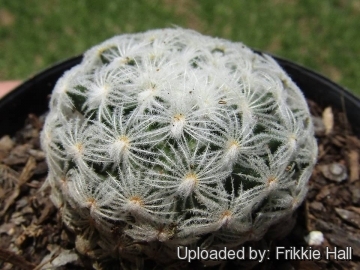 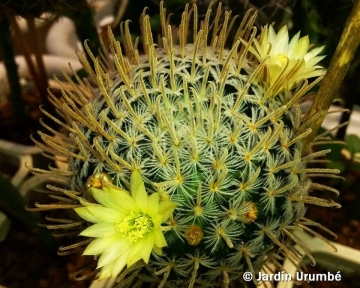 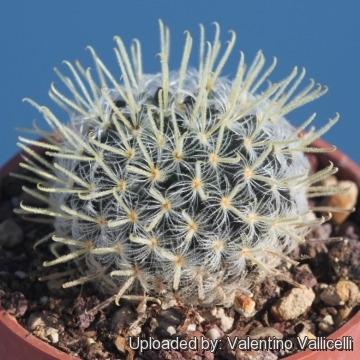 Cultivation and Propagation: Mammillaria duwei is not the easiest to grow of the mammillarias, more rot prone than most and more demanding regarding soil conditions.
Growth rate: It is a small growing, but easily flowering, species that will make clumps given the best conditions.
Soils: It likes very porous standard cactus mix soil.
Repotting: It will need a pot with sufficient depth to allow the tap root. Use pot with good drainage.
Watering: Water regularly in summer, but do not overwater (Rot prone), keep dry in winter. Keep Mammillaria duwei in very dry and ventilated place especially in winter.
Fertilization: Feed with a high potassium fertilizer in summer.
Hardiness: Reputedly sensitive to frost , but less so if kept on the dry side prior to, and during, cold weather (hardy to -5° C for short periods). However warmth throughout the year will increase the grower's success (minimum 5° to 8°C during rest season).
Exposition: Outside bright sun, filtered sunlight or afternoon shade, inside it needs bright light, and some direct sun. Subject to sunburn if exposed to direct sun for too long. Tends to bronze in strong light, which encourages flowering and heavy wool and spine production.
Uses: It is an excellent plant for container growing. It always looks good and stays small. It look fine in a cold greenhouse and frame.
Pests & diseases: It may be attractive to a variety of insects, but plants in good condition should be nearly pest-free, particularly if they are grown in a mineral potting-mix, with good exposure and ventilation. Nonetheless, there are several pests to watch for:
- Red spiders: Red spiders may be effectively rubbed up by misting the vulnerable plants every day
- Mealy bugs: Mealy bugs easily they develop aerial into the new growth among the wool with disfiguring results, but the worst types develop underground on the roots and are invisible except by their effects.
- Scales: Scales are rarely a problem.
It is wise to treat your whole collection with a systemic insecticide twice a year in spring and autumn.
- Rot: Rot is only a minor problem with mammillaria if the plants are watered and “aired” correctly. If they are not, fungicides won't help all that much.
Propagation: Direct sow after last frost or (rarely) cuttings. Seeds germinate in 7-14 days at 21-27° C in spring, remove the glass cover gradually as the plants develops and keep ventilated, no full sun for young plants! To make a cutting twist off a branch and permit it to dry out a couple of weeks, lay it on the soil and insert the stem end partially into the soil. Try to keep the cutting somewhat upright so that the roots are able to grow downward.