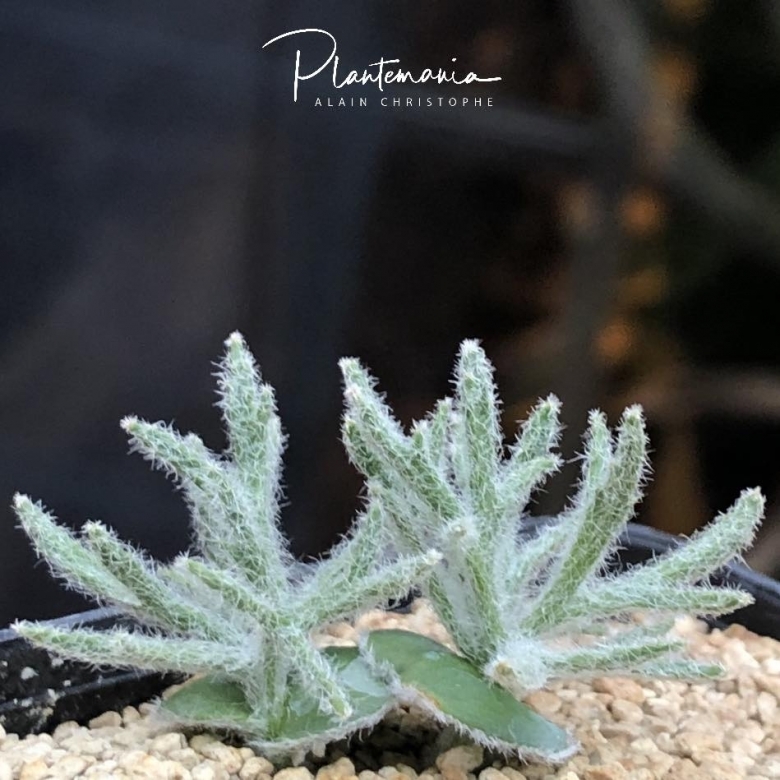 Description: Eriospermum dregei is a small, unusual, geophyte with a below ground tuber (caudiciform). It is very remarkable in particular as to the leaf. This vegetable oddity produces a single leaf blade with branched, featherlike appendage called enations of variable length. They look kind of like fuzzy parsley. Each year the leaf dies in summer and sprouts again in late summer-autumn or so. If it is mature, it should flower in that gap
Leaf: Solitary, hysteranthous (produced after the flowers), erect. The leaf appear to have multiple leaves or leafy/stemmy appendages (enations) rising from a single short stipe (stalk), up to 10 mm long, from the centre of the lamina, but in fact they are outgrowths of a single leaf. These appendages are almost dichotomously branched, with linear, thick and fleshy segments and numerous featherlike branches. There are about five main branches about 18 mm long then much-branched heads, forming a semicircular mop up to 50 mm across, all covered with clusters of long, curly hairs. Contemporary leaf sheath exserted about 15 mm, and are densely covered with hair-clusters often giving a greyish woolly appearance. Juvenile leaves are orbicular to broadly ovate-cordate, 7 mm from apex to the depression and 10 mm wide and does not have enations. Old leaf sheaths are up to 6 cm long and 3-4 mm diameter, widening up to 8 mm near ground level, and membranous.
Tuber: Underground, pear-shaped, irregularly-shaped, or gnarled with rounded warts, up to 40 mm long and 24 mm wide. Skin pale brown, interior pink to maroon red. Growing point basal.
Inflorescence: Solitary, up to 14 cm tall. Peduncle up to 75 mm long, glabrous with barely exserted, membranous bract. Raceme dense, cylindrical or narrowly conical, up to 75 mm long and 30 mm wide, with up to 30 flowers. Pedicels up to 8 mm long.
Flowers: Spreading when fully open, up to 10 mm diameter, triangular. Tepals white with conspicuous green midnerve sometimes overlaid with red streaking. Filaments subequal, fused to the base of the tepals pale yellow. Ovary globose to subglobose, pale green. Style cylindrical, about as long as the ovary, white.
Seeds: Rounded covered all over with hairs. 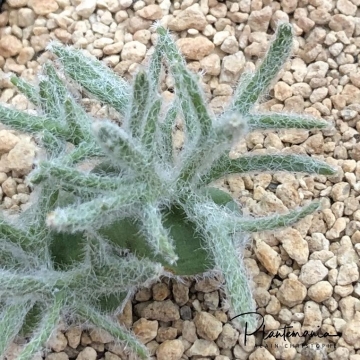 Cultivation and Propagation: Commercial seed usually does not germinate well because they are shorted lived.