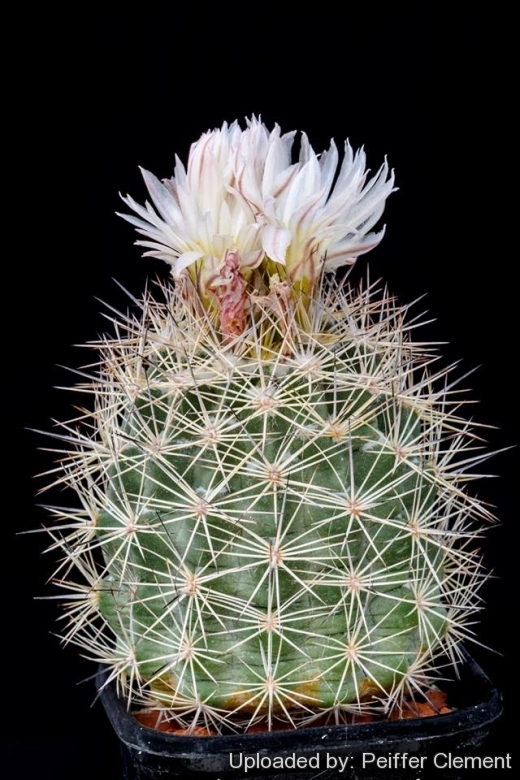 Origin and Habitat: West Texas, especially the Big Bend region near the Rio Grande (Eastern Hudspeth and Culberson Co. to Brewster C.), and neighboring Mexico in NE Chihuahua (W of Ojinaga) and expected in NE Coahuila.
Altitude range: 560- 1500 metres above sea level.
Habitat and ecology: Chihuahuan desert. Echinocactus warnockii is common on on short grass grasslands and creosote scrub on gravel hills and benches, in desert on limestone hills, and alluvial flats at at altitude up 900 metres ASL, or sometimes on gypsum at a height of 1350 metres ASL. This species commonly grows under low bushes on the hillsides exposed to the south. The climate is very rough - in summer temperatures may occasionally reach 50 Celsius degrees. Winter is cold - up to minus 20 degrees Celsius. This harsh environment is the home of several other cactus species comprising: Epithelantha, Mammillaria, Escobaria, Echinocereus and Echinocactus mariposensis. Sclerocactus warnockii has a very large range, is abundant, and there are no major threats. Recent field excursions revealed abundant plants of E. warnockii of all sizes and presumably all ages.

Description: Echinocactus warnockii is a solitary blue-green cactus densely covered, but not completerly hidden, by spines. Plants are variable in length and thickness of spines, yet in their colour. Nursery catalogues sometime distinguish two colour variants: f. pallidus with pale yellow spines without violet-grey shade or with brown tips and f. nigrus with almost black spines. Flower colour can range from bright pink to pure white.
Roots: Fibrous and diffuse.
Stem: Single, light coloured, blue-green, ovate to elongated, 7-11(-20) cm tall, 5-7.5(-10) cm thick, with 13-21 ribs, rarely more, well-defined, laterally compressed and forming distinct tubercles. Tubercles about 10 mm long, 6 mm wide.
Areoles: Elliptic, 3 mm wide, about 10 mm apart.
Spines: Dense, almost covering the body.
Radial spines: 12-14-(17), acicular, slightly smaller than the upper 3centrals, but otherwise like the centrals, irregularly radially arranged from the centre or resembling radials, divergent, stiff, and overlapping, although some of the radial spines may be some-what appressed. Upper half of which slightly longer (about 25 mm), lowermost ones 8-20 mm. All the young spines bright red with dark brown tips, later coloured in various shades of tan, dull yellow or brown, grey at the base and "chalky-blue" or blue-grey (rarely reddish-purple) on the distal portion.
Central spines: 1-4(-6), straight. Lowermost one (in adult plants only) with a tuberous thickened base, porrect or pointing downward, 20-25 mm long, other 3(-5) central spines, thinner, spreding, pointing upward. The colour of the central spines is similar to that of the radials, or the centrals, particularly the lower central, may be blue-grey (rarely dark reddish-purple) for more that half of their length.
Juveniles of Echinomastus warnockii have circular areoles in which there is a central region ca. 1 mm across that is devoid of spines, and 11-15(-17) radial spines with blue-grey tips, and often one or two central spines with violet tips. In seedlings that are less than 1 cm long, at least some of the radial spines are pubescent.
Flowers: Near apical, about 23-30 mm long and broad, widely opening white to creamy white, rarely pinkish, self-incompatible. Lower perianth-segments with a distinctive broad green stripe and white or pink membranous margin; uppermost segments lanceolate, 9-12 mm long, about 4.5 mm wide, apex pointed, margin wavy, pink to white. Filaments whitish, pale green, or pale yellow, 3 mm long; anthers dark yellow, oblong, 0.7 mm long; pistil light green, about 10 mm long; stigmatic lobes 5-10, about 1 mm long, light green, erect.
Blooming season: Flowering usually in late winter to early spring (Feb—Mar). Plants produces 1-2 flowers at the same time, opening in early afternoon on warm sunny days, closing at night and reopening again for 2-4 days. Flower production may go on for several weeks.
Fruits: Green, becoming brown when ripe, spherical c. 6-10 mm in broad, with few white, very wide scales, retaining the shrivelled floral remnants until full maturity.
Seeds: Flattened obovate, to subglobular, 1.5 mm long, 2 mm wide and 1 mm thick, black, minutely papillate.
Related species: Echinocactus warnockii is closely related with Echinomastus acunensis, from Arizona, and Echinocactus intertextus from Texas, New Mexico and Arizona.

Subspecies, varieties, forms and cultivars of plants belonging to the Echinomastus warnockii group

Cultivation and Propagation: Echinomastus warnockii is a most beautiful cactus but rarely seen in cultivation. It is quite difficult to grow on its own roots. Very easily rot! It’s thought that’s better to watch this species in photo or in the natural habitat rather than to try to cultivate it. For this reasons the plant is often grafted on a frost hardy stock.
Soil: Use mineral well-permeable substratum with very little organic matter (peat, humus). It needs perfect drainage to flourish.
Repotting: Repotting every 2-3 years. As it is especially prone to rot under-pot in a smaller container filled with very porous compost. Use pot with good drainage.
Exposition: This plant need full sun and above all a very good ventilation, especially in winter. Tends to bronze in strong light, which encourages flowering and heavy spine production.
Watering: Water sparingly during the growing season and keep totally dry during winter. In the rest period no high atmospheric humidity!!Care must be taken with watering as they tends to become swollen and untidy in growth habit if given too much water and shade.
Fertilization: During the growing season enrich the soil using a fertilizer rich in potassium and phosphorous, but poor in nitrogen, because this chemical element doesn’t help the development of succulent plants, making them too soft and full of water.
Hardines: It can tolerate temperature below zero (-15° C or less).
Pests & diseases: It may be attractive to a variety of insects to watch for:
- Red spiders: Sensitive to red spider mite. Overhead watering is helpful in controlling mites.
- Mealy bugs: Occasionally mealy bugs they develop aerial into the new growth among the wool with disfiguring results, but the worst types develop underground on the roots and are invisible except by their effects.
- Rot: Rot it is the major threat. If the plants are not watered and “aired” correctly, fungicides won't help all that much. Mature individuals - if the growing conditions are not optimal, easily rot and die.
Remarks: Displaying your cacti on shelves has the added benefit of keeping them off the ground and away from potential rodent or snail damage.
Propagation: Seed or grafting. Seeds germinate in 7-14 days at 21-27° C in spring, remove the glass cover gradually as the plants develops and keep ventilated, no full sun for young plants! The seedlings should not be disturbed until they are well rooted, after which they can be planted separately in small pots. Seeds are relatively difficult to germinate (only a limited percentage of seeds germinate). Grafting is often used to speed growth rate and to create a back-up for plants in collection.