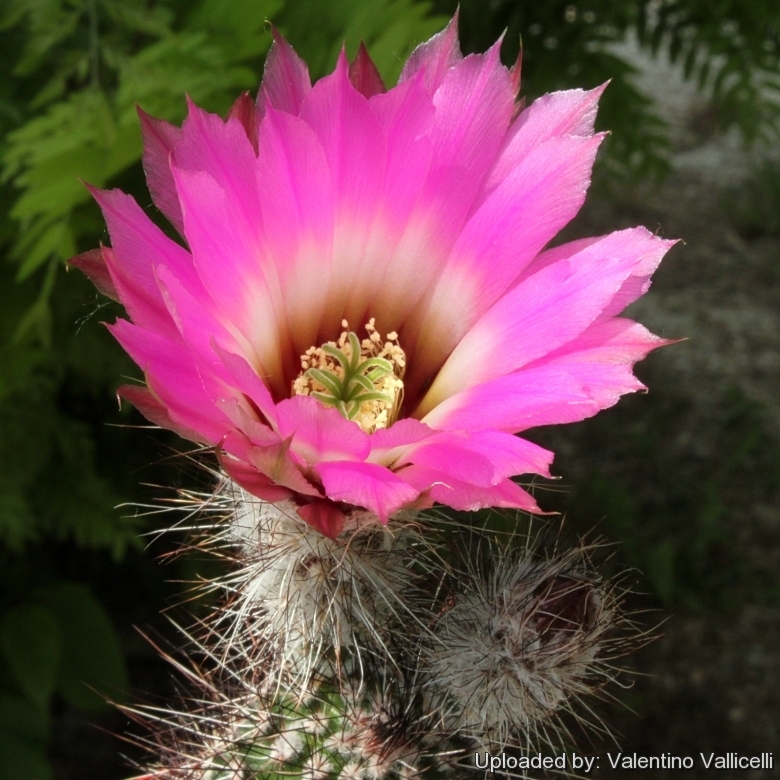 Origin and Habitat: Echinocereus chisosensis has a very limited range in northern Trans-Pecos (Big Bend region of Texas), Brewster County, USA. (The other variety of Echinocereus chisoensis, var. fobeanus, occurs in Coahuila and Durango). Extent of occurrence less than 5,000 km2).
Altitude: It occurs at elevations below 1000 metres above sea level (mostly 600-800 m asl)
Habitat: Chihuahuan Desert. It is grows in desert grasslands or open xerophyllous shrublands on gravelly limestone flats and low hills. The total population is estimated to be less than 1,000 individuals, and a high percentage of them are mature and recruitment is low. It is threatened by the non-native buffelgrass (Pennisetum ciliare), and illegal collection, hence the species is listed as Endangered. Echinocereus chisoensis var. chisoensis is almost al-ways found under the shelter of nurse plants, such as shrubs and grasses but also Opuntia aggeria, Larrea tridentata, Acacia constricta, and Agave lechuguilla. Other common species in the habitat include Jatropha dioica, Leucophylium frutescens, Opuntia rufida, Opuntia macrocentra, Opuntia engelmannii, Echinocereus stramineus, Echinocereus dasyacanthus, Echinocactus horizonthalonius, Sclerocactus warnockii, Coryphantha macromeris, and Coryphantha echinus. This species is homogamous, self-incompatible, xenogamous, and heavily dependent upon the cactus bee, Diadasia rinconis (Anthophoridae) for pollination. When fruits are successfully produced, they are often taken by jackrabbits and rodents for food. Rodent herbivory may affect the plants in dry years.

Description: Echinocereas chisoensis(sometimes spelled "chisosensis") is a rare cactus species known by the common name "Chisos Mountain hedgehog cactus" with fantastic flowers. The base of the petals is deep crimson followed by a pinkish-white band and a pink-purple or rose-coloured tip. The bright green stygma lobes stand out over a bed of creamy anthers.
Distinguishing characteristics: Echinocereas chisoensis is easily tell apart from other Texan echinocerei by the usually solitary, large, ribbed, tuberculate stems, with spines not obscuring the surface; and the floral tube with its covering of wool and bristly, hair-like spines. When not in flowers it may be confused with Echinocereus viridiflorus var. russanthus and perhaps Echinocereus dasyacanthus.
Habit: Perennial stem succulent, solitary or few branched.
Stems: Cylindrical, erect or ascending, tapering toward the tips, not annually constricted, 5-25(-30) cm high, 3-5 cm in diameter. Healthy stems are light green, grey-green to blue-green, but take a reddish-maroon tinge when stressed.
Roots: sometimes thickened.
Ribs: 10-16, vertical or more or less spiralled, strongly tuberculate.
Tubercles: 6-8 mm apart.
Areoles: Distinctly woolly, especially in enlarged flower-bearing areoles, almost circular when young, about 2 mm long but becoming elliptic and bare with age.
Central spines: 1-6, very slender, straight, brownish, dark brown to black with whitish bases, 3-25 mm long (mostly about 17 mm), lowermost one longest and perpendicular to stern, others ascending and diverging.
Radial spines: 11-17, slender, whitish or ashy to pinkish-gray, often with brown to maroon tips tending to diverge, not pectinate, uppermost ones tiny and bristle-like 16-32 mm long, lowermost 6-20 mm long.
Flowers: Funnelform, from near the top of plant and below, light pinkish to magenta with white (or at least paler) throats and dark crimson centers, about 6-6,5 cm long, 2,5-7 cm in diameter (but up to 9,5 long and 12 cm in diameter in var. fobeanus) often not opening widely if shaded. Floral tube greenish, woolly, with evenly spaced clusters of hairy or bristly, brown-tipped spines (resembling those of the closely related Echinocereus reichenbachii). Inner perianth parts in two whorls, pointed, remaining upright, characteristically deep red near the base. Stamens with white or pink filaments and pale yellow anthers. Style whitish, exerted with about 10 green stigma lobes.
Phenology It blooms in spring in spring ( In habitat usually in March-April, perhaps to July; fruit mature in about one month in May-June, perhaps as late as August). Flowers open mid-morning and close at night and again for 1 to 3 days.
Fruits: Oblong, narrowly obovoid or club shaped, to 18-37 mm long, 10-15 mm in diameter, green to reddish, more or less covered with woolly areoles bearing bristly or hair-like spines, but ultimately the areoles are deciduous. The fruit is fleshy and splits open on one side at maturity. Pulp is whitish, mucilaginous or nearly dry.
Seeds: Oval, 1-1,2 mm in diameter, dark brown to black, warty.
Chromosome number: 2n = 22.

Subspecies, varieties, forms and cultivars of plants belonging to the Echinocereus chisoensis group 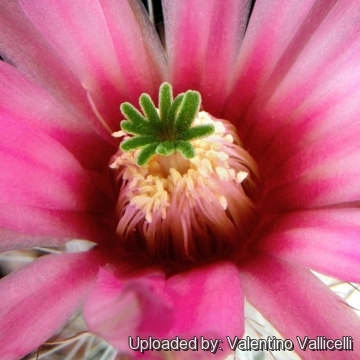 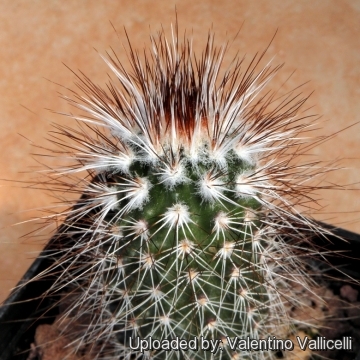 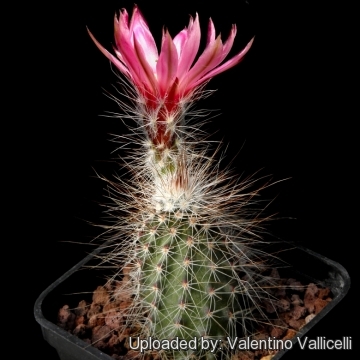 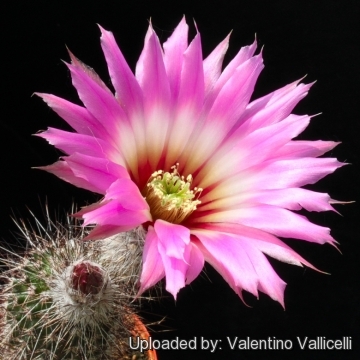 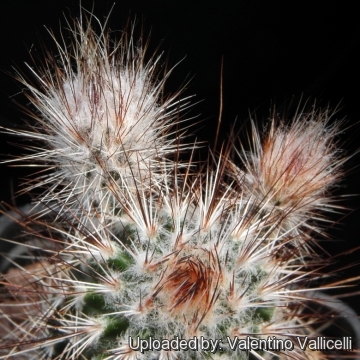 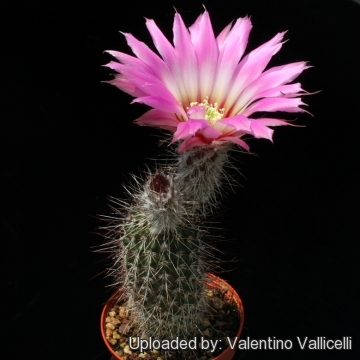 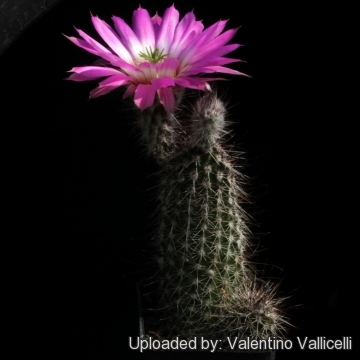 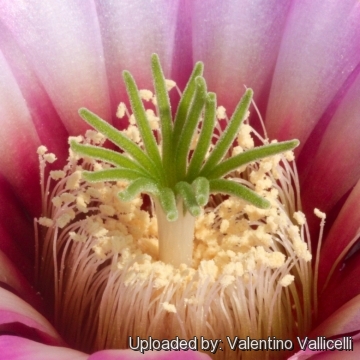 Cultivation and Propagation: Echinocereus chisoensis is fairly easy to grow. It makes great potted specimens.
Soil: Use a mineral well permeable soil with little organic matter (peat, humus). It grows in limestone areas of Texas (Big Bend area) and adjacent areas of Mexico, so will probably benefit from extra calcium in its soil.
Growth rate: It grows well, though slowly, but it possible to increase the speed of growth to some extent by providing adequate amount of water, warmth, and a liquid fertilizer diluted half strength during the active growing season, but it’s susceptible to rotting if too wet. Most plants will offset readily, and clumps can be produced in a few years.
Soil: It needs a very porous, slightly acidic potting medium (add pumice, vulcanite, and perlite). Outdoors it does well on poor, rocky soils.
Exposure: It likes a sunny position also blasting sun in summer. If grown indoor provide 4 to 6 hours, or more, direct morning or afternoon sun.
Watering: It is sensitive to overwatering (rot prone) needs a very good drainage to avoid rotting, but requires more moisture than true desert cacti to grow and produce flowers.
Hardiness: It its natural environment it is very cold resistant from -10° to -25° C (depending on clones) or less for short periods of time. It can be grown outdoors in Mediterranean warm-temperate climates, But for safe cultivations needs anyway to kept above 5 °C and dry in winter. But it can tolerate temperatures down to -5° C (or even less) for very short periods if very dry and ventilated. During winter month, put them in a cool luminous place and encourage them to enter winter dormancy by withholding water and fertiliser over the winter as they will etiolate, or become thin, due to lower levels of light.
Maintenance: Repot every two years. Needs lots and lots of space to grow, use large shallow container or bowl filled with very porous compost. It like pots with generous drain holes.
Pest & diseases: They are susceptible to fungal diseases if overwatered, but are not nearly as sensitive as many other cacti, especially in warm weather. If kept damp through cold periods, they will invariably suffer.
Uses: It is a fine plant for a rock garden or container, contrasts well with agaves, yuccas, and low-growing flowering plants.
Propagation: Seeds, also can be grown from cutting as it slowly branches from the base. The seeds may be germinated and grown in containers. Their main requirements consist of high humidity levels, free-draining soil mix, and enough water, light, and nutrition.