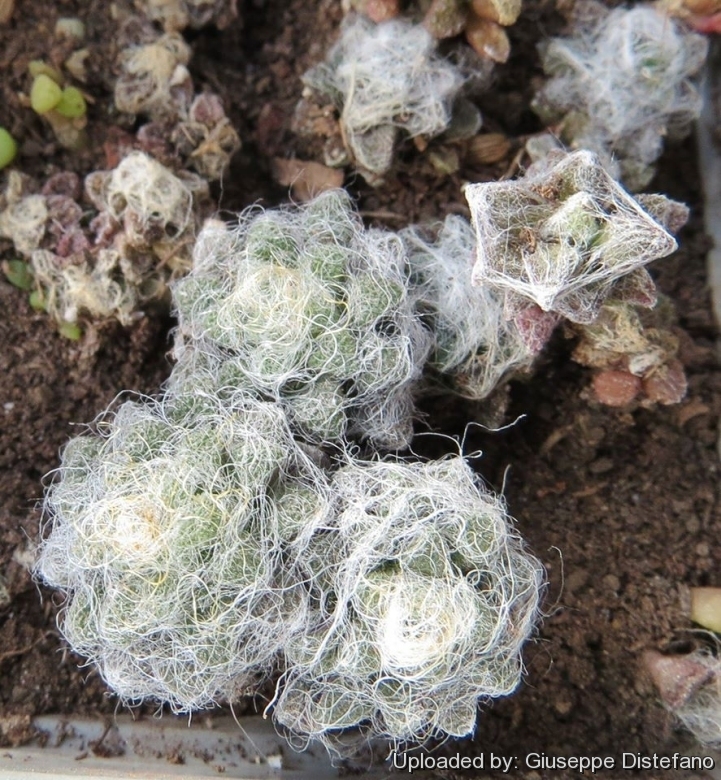 Description: Anacampseros baeseckei var. crinita (Anacampseros crinita), favoured by some as a good species, is distinguished from Anacampseros baeseckei for its larger leaves and long brown bristles. In all other characteristics, namely shape of stems, flowers, fruits, roots etc. it is very similar to the standard A. baeseckei. Light white felt on leaves, and freely produced deep pink or carmine flowers make it one of the most interesting species, which is grown for the appearance of its leaves, rather rather than for its flowers.
Habit: It is a short columnar succulent with fleshy branches covered in closely packed rounded leaves. It develop a small caudex.
Branches: Short-columnar, erect, up to 10 cm tall, densely packed with overlapping leaves in several spirals.
Leaves: Subglobose, obovoid or cuneate, 3-7 mm, 3 mm broad, rounded, chinned, verruculose at the tip, pale grey-green to reddish-green, the hook cells merged into solid plates and hairs white more or less densely matted, longer than the leaves. Axils with brownish hairs and bristles to 1.5 cm long curled and sparse, some exceeding the leaf.
Inflorescences: Bracteate with 1 to 4 flowers.
* Flowers: Approx. 20 mm in diameter; Sepals 5-8 mm, ovate-lanceolate. Petals 7-9 long, 4-5 mm broad, obovate to ovate-lanceolate, acute, dark pink, or red carmine with margins and lower faces often paler. Stamens 20-25.
Blooming season: Summer ( in northern hemisphere mainly from June to August)
Fruits: 5-8 mm.
Seed: Numerous, less than 1 mm broad, obliquely pyriform, colliculate.

Subspecies, varieties, forms and cultivars of plants belonging to the Anacampseros baeseckei group 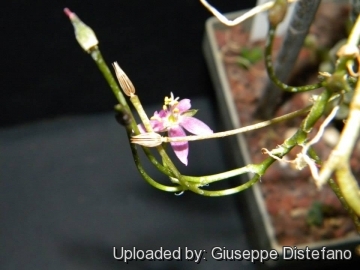 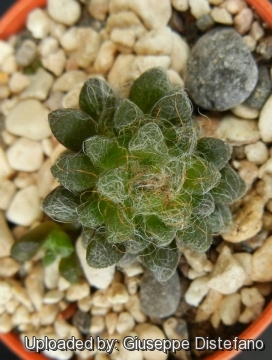 Cultivation and Propagation: Anacampseros baeseckei var. crinita is one of the more common species in cultivation and quite resistant to cultivation. The only things that can kill this plant are cold and overwatering. Nevertheless, it is appropriate to provide adequate growing conditions in order to obtain compact plant with many flowers.
Growth rate: Slow growing to start but does well under cultivation. They need to be moderately large (about 20 cm in diameter) before they flower.
Soils: Use a an open and free draining mineral compost with little organic matter (peat, humus) that allows therefore roots to breath (as it is rot prone). Outdoors a well-draining rocky or sandy soil is ideal.
Repotting: Repot Anacampseros baeseckei once a year in order to evaluate the health of the plant and provide a larger growing space being careful not to damage the sensitive roots.
Watering: It likes a winter's rest and should be kept completely dry during the winter months. From early spring onwards the plant will begin to grow and watering should be increased gradually until late spring when the plant should be in full growth. Water regularly during the aestival growth cycle so long as the plant pot is allowed to drain and not sit in a tray of water (this plant need plenty of water) But needs to be avoided wetting the bodies of these plants while they are in sunlight. A wet plant in the sun light can cause sun burning which can lead to scars or even fungal infections and death. From late summer watering should be reduced to force the plant to go in to a state of semi dormancy, by autumn you should be back in to the winter watering regime. Keep dry with ample airflow in winter (but for outdoors cultivation it is somewhat resistant to wet conditions, too if grown in very draining substrata). In the rest period no high atmospheric humidity!! Care must be taken with watering as they tends to become swollen and untidy in growth habit if given too much water and shade.
Fertilization: Feed with a high potassium fertilizer in summer during the growing season diluted to one-fourth potency and mix into the watering can for application.
Hardiness: Keep dry at 5- 10° C in winter, but can tolerate sporadic light frost if kept on the dry side prior to, and during, cold weather. Pots may be placed outdoors during the summer months, but must be moved indoors during the winter. USDA zones 9-11
Exposition: The plant tolerates bright situations, if kept too dark they may become overly lush and greener and could be prone to rotting due to over watering. Strong but filtered light encourages flowering, but is likely to suffer from sun scorch or stunted growth if over exposed to direct sunlight during the hottest part of the day in summer. .
Uses: It is an excellent plant for container growing. It always looks good and stays small. It look fine in a cold greenhouse and frame. It do well outdoors in raised beds, rock gardens and terraces as well. The slowly creeping stems cluster freely to form mats as a small area ground cover. Anacampseros baeseckei also makes an excellent potted windowsill plant.
Pests & diseases: It may be attractive to a variety of insects, but plants in good condition should be nearly pest-free, particularly if they are grown in a mineral potting-mix, with good exposure and ventilation. Nonetheless, watch carefully for any significant decline in health. This may signal a pest problem that should be dealt with quickly in order to prevent scarring, stunting and even death.
- Red spiders: Red spiders may be effectively rubbed up by watering or misting the plants from above.
- Mealy bugs: Mealy bugs occasionally develop aerial into the new growth among the leaves with disfiguring results, but the worst types develop underground on the roots and are invisible except by their effects. Eliminate mealybug infestations by dabbing the critters with cotton swabs dipped in alcohol or by soaking the succulent roots in a systemic insecticide.
- Scales: Scales are rarely a problem.
- Rot: This species is particularly easy and accommodating, seldom suffer of cryptogamic diseases. Rot it is only a minor problem with cacti if the plants are watered and “aired” correctly. If they are not, fungicides won't help all that much.
Propagation: it is easy to propagate either through stem cuttings or seed.