Origin and Habitat: South Africa (Northern Cape, Richtersveld and Namaqualand, from Sendelingsdrift to Garies) and Namibia. This species is common, particularly on the quartz hills of western Bushmanland.
Altitude range: Larryleachia cactiformis grows at an altitude of 800 - 1600 metres above sea level.
Habitat and biology: It can be found on quartz flats, slopes and hills to gneiss domes on the Kamiesberg in the eastern edge of the winter rainfall region in Fynbos, Succulent Karoo. They are highly succulent and adapted to very harsh and bright habitats. Larryleachia is a very fine example of convergent evolution, very easy to mistake for a cactus. However the very similar development of very similar characters in plants evolving in similar conditions although separated by very great distances or otherwise impossible contact. It is widespread, common and not threatened.

Description: Larryleachia cactiformis, best known in cultivation as Trichocaulon cactiforme, is a small perennial stem succulent with a globular body tessellate with roughly pentangular, flat or depressed tubercles. This species is quite variable particularly in the colour of flowers.
Habit: Unbranched or sparsely branched.
Stem: Globular to short-cylindric, green or light green or blue-green 5-15(rarely 30 cm) high, 20-60 mm wide; latex colourless.
Ribs: 12-16, indistinct ribs and tessellate with roughly pentangular, flat or depressed tubercles closely set together.
Leaves: Persistent, reduced to scales, in spirals or verticillate, sessile (and sunken), strongly adscending, 0,5-1 mm long.
Roots: Fibrous.
Flowers: Appear (usually) close to apex of stems in extra-axillary inflorescences 1 to 5 together on a tubercle apex, almost sessile or on a short peduncle to 1 mm long. Corolla about 6 to 10 mm in diameter, simple, fleshy, abaxially whitish cream, green, yellow to dull pinkish uniformly coloured or maculate with reddish, purple or maroon, adaxially white, cream, green or yellow, glabrous. Tube flat or deeply cup-shaped. Corolla lobes broad ovate, accuminate, 2-4 mm long, 2-5 mm wide, tip curved upwards, inside more or less papillate with small bristle toward the apex. Inner corona 4-5 mm in diameter.
Blooming season: Flowers open synchronously in summer.
Fruits: 2-3 cm long diverging at an angle of 180°.
Remarks: This plant has a highly specialized pollination biology, that depends upon flies which are deceived, partially trapped and used as collectors of the pollinia which they transport to a cyathium (Flower) on another plant.

Subspecies, varieties, forms and cultivars of plants belonging to the Larryleachia cactiformis group

Notes: The genus Larryleachia was erected by Plowes in honour of Leslie Leach, an English-born electrical engineer, self-taught botanist, and specialist in Asclepiads and Euphorbias. This plant is perhaps best known as one of the smooth-stemmed members of Trichocaulon, the spiny stemmed species were combined with Hoodia, leaving the former in need of a new generic home. The new genus Leachia was rendered invalid as it had already been applied to a genus in the Asteraceae. Realizing his error, Plowes chose a new name Leachiella. Despite having checked as to the availability of that name no one realized until after publication that it had been used before for a genus of red algae. In 1997 it was finally designated as Larryleachia picta along with several other smooth-stemmed species of the former Trichocaulon genus, now the preferred designation among botanists today. 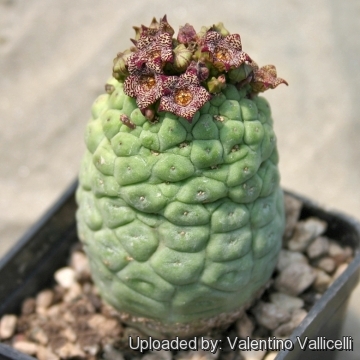 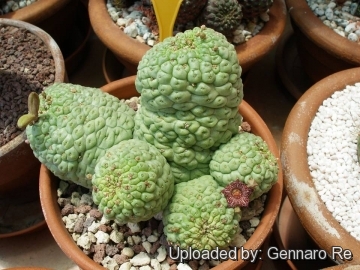 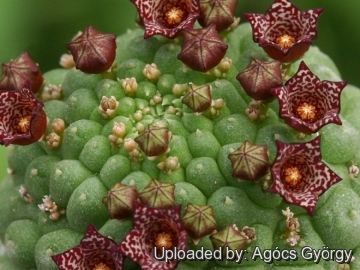 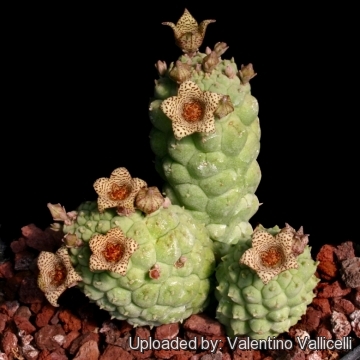 Cultivation and Propagation: Watering Needs: Water normally in the growing season, dry in the winter.
Summer: In the summer months they will grow well in partial shade.
Potting medium: Since roots are quite shallow, use a cactus mix or add extra perlite or pumice to regular soil potting soil. A gritty, very free-draining compost is suitable, and clay pots help the plants to dry out between watering.
Propagation: Seeds.

by Valentino Vallicelli
There are a total of 19 Photos.
Click here to view them all!
Cite this page: "Larryleachia cactiformis" Text available under a CC-BY-SA Creative Commons Attribution License. www.llifle.com 14 Nov. 2005. 23 Oct 2021. </Encyclopedia/SUCCULENTS/Family/Asclepiadaceae/18662/Larryleachia_cactiformis>