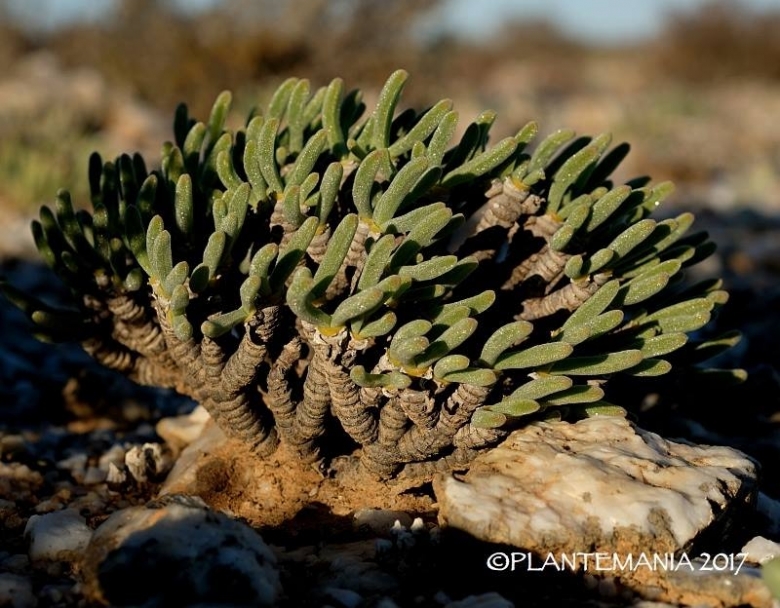 Origin and Habitat: Monilaria monililormis is endemic to the Western Cape (Distr Vanrhynsdorp,Vredendal), Republic of South Africa.
Habitat and ecology: It occurs on quartz and rocky sites in the Knersvlakte and on rocks near the coast. Spring flowering. M. moniliformis grows in the southernmost and least arid part of the distribution area of the genus along with Argyroderma spp. and Dactylopsis digitata. Its growing season is in the Autumn and Winter months. During the resting period, the plant has a dead appearance, because of its off-white segmented branches.

Description: Monilaria monililormis (Family Aizoaceae) is a small, sparsely branched, cushion-forming succulent shrublet to 15 cm high whose winter leaves disappear in summer, leaving, branches pinched into segments (short internodes). Each internode is covered with a persistent barrel-shaped or box-shaped sclerotic sheath, and shortly jointed like a bead necklace. The solitary, terminal flower (40 mm in diameter) is white and has a long pedicel.
Derivation of specific name: Among the mesems this plant has one of the most appropriate names. It is derived from the Latin monile, which means a string of pearls, referring to the curious shape of the stem after many years' growth.
Leaves: The leaves are opposite as in most members of the family Aizoaceae, but are somewhat peculiar in that the plant produce two different pairs of leaves. This is called heterophylly. The first pair of the season emerges from the top "bead" in the form of a nearly hemispherical bag or sheath to 10 mm in diameter. The laeaves of the “bags” have a small tip, and are completely fused to each other, and are hidden during the resting state inside the latest sclerotic sheath. After two or three weeks in this stage, a second pair of leaves, totally different to the round ones, appear, these are more conventional, being long and cylindrical, about 10-15 cm long, and 3-5 mm in diameter, very soft, and short lived. They are united only at the base, with the basal part developing into a sclerotic jug-like persistent sheath at the end of the season. The long pairs of leaves are covered in glistening papillae (small crystalline cells), similar to the appearance of the stems of Mesembryanthemum crystallinum. During the growing season the plant bears both types of leaves for some time. M. moniliformis is distinguished from other species by the round, soft, short-collared sheaths which completely cover the leaves for the next growth period.
In M. moniliformis the internodes are often larger than long, 10-20 mm in diameter, terminal sheath during the resting state viewed from above circular or irregularly angled, comparatively soft and short, covering the corpuscle of the first leaf-pair of the next season only incompletely, rim of expanded sheath often irregularly lacerat, sheaths 5-13 mm long, 6-10 mm wide.
Flowers: Solitary white on long stalks, 35-40 mm in diameter. Petals usually white, filaments white, orange or purple.
Fruits: 6-13 mm in diameter.
Chromosome number: 2n = 18.
Taxonomic notes: Haworth based his description on plants he had seen in two collections. No type was deposited, but the identity of Thunberg's and Haworth's taxa is doubtless. In 1973 a monograph by H.-D. Ihlenfeldt and S. Jorgensen was published in which the species of Monilaria are reduced from 11 to 5.