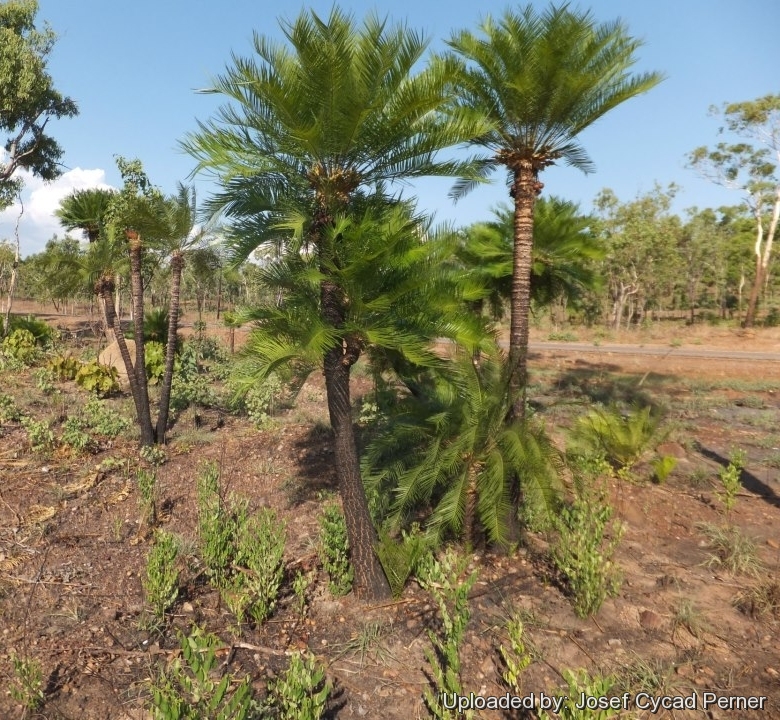 Origin and Habitat: Cycas armstrongii is endemic to the Northern Territory, monsoonal northern Australia. It extends from the Adelaide River west to the Finniss River and south to the township of Adelaide River, with sporadic occurrences farther south almost to Hayes Creek and Emerald Springs, and in a limited area on Melville Island. Intergrading populations with Cycas conferta occur at Mt Bundey and near Hayes Creek, and apparent hybrids are known with Cycas maconochiei. Quite often the populations of C. armstrongii spill over into territories where Cycas calcicola grows and at least one researcher believes he has found obvious hybrids between the two species. C. armstrongii is one of the most abundant cycads in the world, with a population estimate of over ten million.
Habitat and Ecology: C. armstrongii is an abundant species, in dense and extensive populations on sandy loam vicinities over tertiary laterites in Eucalyptus miniata / Eucalyptus tetrodonta forests around Darwin. Plants are found under open tropical deciduous woodlands, rarely in it can be found in dense stands near granite outcrops. C. armstrongii, produces new growth on aerial stems after fire in a way reminiscent of re-sprouting by eucalypts, which are the major tree component, except that the cycad re-sprouts first. Regular (almost annual) dry-season fires experienced over much of the range promote leaf-drop, and fertile plants are frequently seen with reproductive structure only, and no leaves. This particular species along with a sister species Cycas calcicola is much maligned in the territory and suffers from the annual burn off which was part of the aboriginal way of life, but is now continued by many cattlemen. However the resulting new fronds carry a very powerful defence mechanism in the poison Cycasin which affects all the cattlemen's herds. Fires generally blacken the caudices, and destroy much of the ripe seed. This species is locally extremely abundant and not considered to be at risk, but land clearing and inappropriate fire regimes may be threats. Increased fire intensity, particularly arising from increased fuel load due to invasion of exotic grasses, is expected to result in higher mortality.

Description: Cycas armstrongii, is a palm-like plant with a slender dark grey trunk 1-4 m tall, which terminates in a crown of long, pale green feathery leaves up to 120 centimetres long. The scientific name "armstrongii" honours John Armstrong, a collector for Kew Gardens appointed to establish a government garden at Port Essington in 1838. The species is extremely fire tolerant, and the usually early spring fires initiate a profusioin of new leaf growth in the plants, thus the common name, fire fern. Typical of all the family, the plants are dioecious and in this species, also deciduous, generally after April.
Distinguishing features: It is distinguished by the green mature new growth and the discolorous leaflets with the midrib equally prominent above and below. This species also has the smallest overall stature of all Australian taxa.
Trunk: 1-4 (seldom 6 m) m tall, 5-11(-159 cm thick, slender, dark grey, very rough. Fires natural or man-produced generally blacken the trunks. The regular fires can also kill the above-ground parts of shorter plants, promoting below-ground branching from an often massive swollen subterranean caudex.
Leaves (fronds): About 50 in the crown, 50 cm to a little over 1 m in length, leathery, slightly keeled or flat, pinnate with 100-220 leaflets. Leaflets 5-14 cm long, 4-8 mm wide, 10-12 mm apart, angled forward at 40 degrees, entire, linear, straight, with the midrib equally prominent above and below, densely orange-pubescent a first, then discolorous, glossy pea-green above, light green below and mottled with yellow on underside, with yellowish brown tips, decurrent at the base. Basal leaflets not gradually reducing to spines. Petiole frequently at least partly spinose, or wholly unarmed only on about 10--15% of individuals in a population. This species is facultatively deciduous late in the dry season of the monsoonal climatic cycle experienced in its natural habitat. Plants in cultivation or in locally wetter sites can retain leaves for longer, but become dormant, and it appears that the strong seasonal stress is required to rejuvenate plants. The rejuvenating new fronds of both C. armstrongii and Cycas calcicola are referred to locally as "fire-fern".
Cataphylls: The cataphylls (Modified leaf, much reduced and thickened, serving to protect the apical meristem in cycads produced in flushes preceding the emergence of cones or leaves.) are linear, pungent, pilose, persistent.
Male cones: Oval, 12-20 cm long, 7.5-10 cm diameter at the apex of the plants, orange to deep rusty, with upper half of cone drawn to a poin and composed of hundreds of scales arranged somewhat in a spiral. At first, tightly closed, but opening later to eject dust-like spores.
Female spikes: Like other Cycas species, the female plants do not bear true “cones”; instead they carry ovules and seeds on fleshy, megasporophylls that are open leaf-like flattened structures . The macrosporophylls are triangular flattened, pubescent, 13-22 cm long, with 2 basal lobes, the margins and apex with sharp spines. Ovule per sporophyll 2-4. Thin basal stem lobes are below the ovules. Later this 'cone' opens fully and the sporophylls arch outward and hang pendant from the plant's crown.
Seeds: The pendant fruit are 2-4 cm scross, globular, sarcotesta yellowish green with a yellow/brown coating, when ripe shiny. Fruiting: March to September.
Similar species: Because of certain familiar aspects this species has earlier been confused with the east coast Cycas media. However C. armstrongii has a much narrower caudex, and Cycas media is seldom deciduous naturally. It may also be confused with Cycas maconochiei. 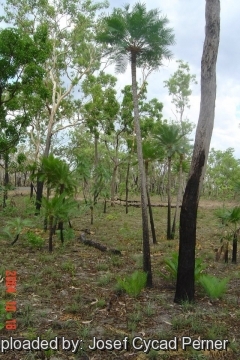 Cycas armstrongii in habitat. South of Darwin in the Northern Territory of Australia. Photo by: Josef Cycad Perner 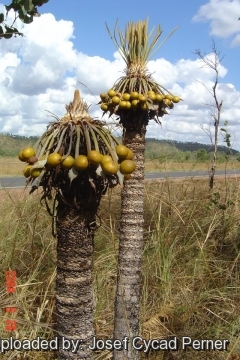 Fruiting habit with new emerging leaves. outh of Darwin in the Northern Territory of Australia. Photo by: Josef Cycad Perner 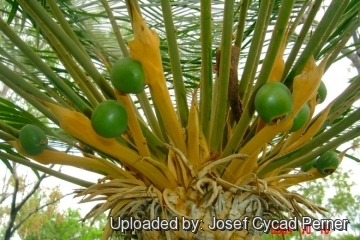 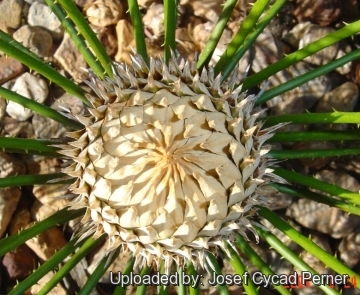 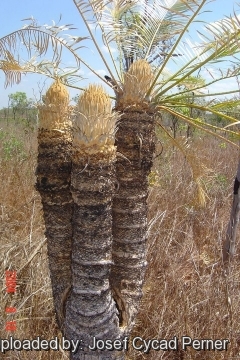 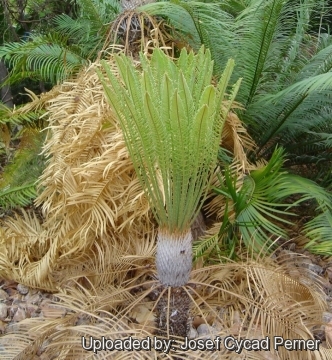 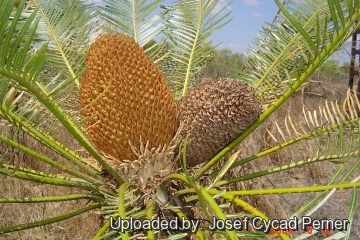 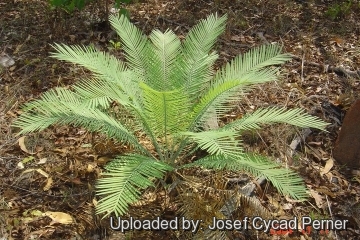