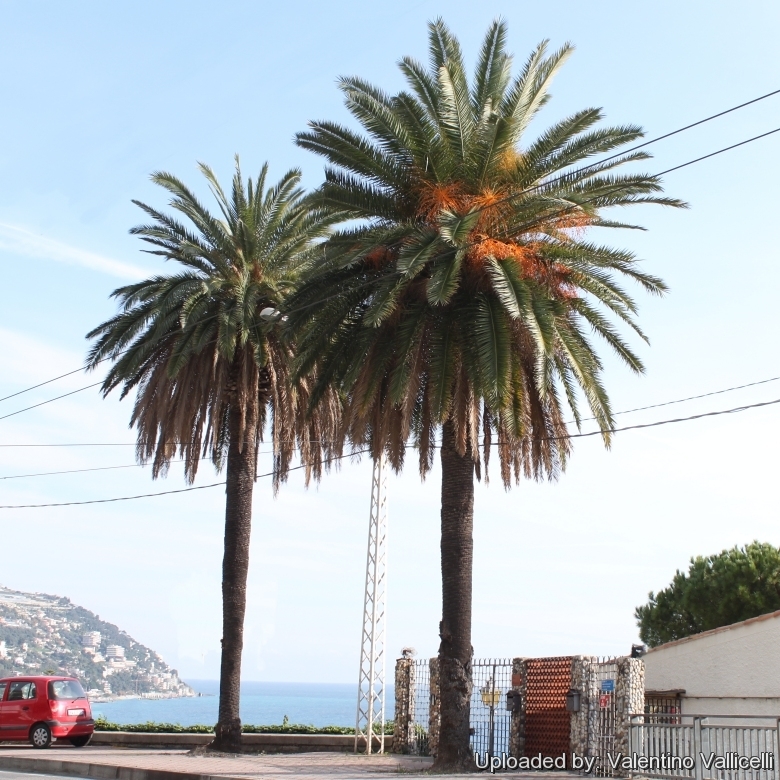 Origin and Habitat: It is endemic to the Canary Islands, but very widely cultivated in warm temperate regions of the world, particularly in areas with Mediterranean climates. It is naturalized in New Zealand where it has proven to be an invasive plant
Habitat: It grows mostly in the bottom of valleys on a wide variety of soils, all of volcanic origin and usually fertile and below 600 metres. Phoenix canariensis has an extensive root system, which allows this palm to explore the surrounding earth to find subterranean water even at long distances. It even grow in subxeric areas because it is resistant to temporary swamping of the soil caused by sudden rains.

Description: Phoenix canariensis ia a massive and majestic palm, easily recognized through its characteristics solid trunk and crown and one of the most widespread of all ornamental plants. It is relative to the date palm (Phoenix dactylifera) and can hybridize with it..
Trunk: Solitary, columnar, thick, hulking 10-20(-40) m tall, 30-40 cm in diameter covered with old dried fronds, but it is not uncommon to see the trunk pruned and trimmed to show the diamond designs that mark the point of attachment of the leaves. When pruned, the bottom of the crown, also called the nut, appears to have a pineapple shape.
Crown: Huge 8-12 mt in diameter, dense, with over 50 long arching fronds.
Leaves (fronds): Narrowly oblong, pinnate, 4–6 m long, with 80-100 linear leaflets on each side of the central rachis deep green shading to a yellow stem where the leaflets are replaced by strong, sharp spines on the petiole. Not self-cleaning, so the old leaves need to be cut off by hand (not an insignificant job on a large plant).
Inflorescences: Drooping, highly branched panicles of creamy-yellow flowers. It is dioecious (with male and female flowers on different plants)
Fruit: Oval, very decorative, yellow to orange drupe 2 cm long and 1 cm diameter and containing a single large seed; the fruit pulp is edible but not very tasty.
Remarks: In areas of high rainfall, these palms are often seen with ferns, bromeliads, orchids Hylocereus and other epiphyte growing from among the old leaf stems, it is not rare to see large plants even Ficus trees growing this way. Decomposing leaf litter and other fibrous matter collect there creating an absorbent compost that sword epiphyte love, forming a hanging garden just below the palm's canopy. It is the natural symbol of the Canary Islands, together with the Serinus canaria (Canary bird). 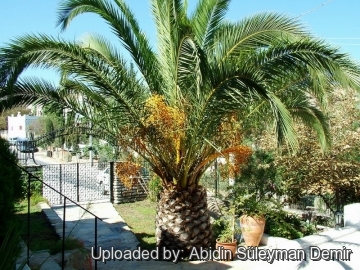 This palm is in Bodrum, Aegean coast of Türkiye. Photo by: Abidin Süleyman Demir 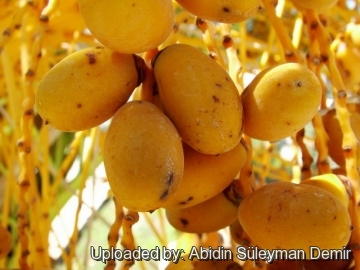 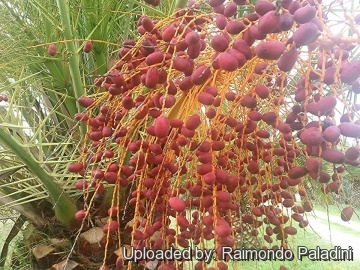 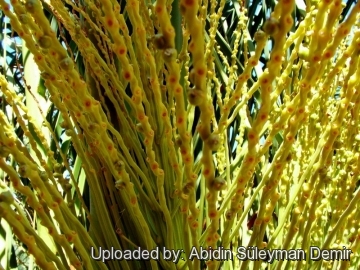 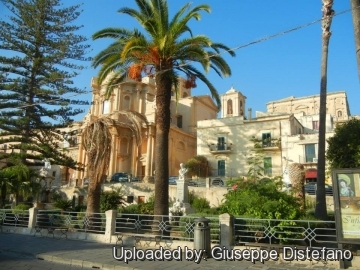 This palm is in Noto, Siracusa (Sicily), Italy Photo by: Giuseppe Distefano 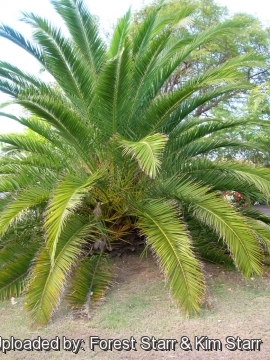 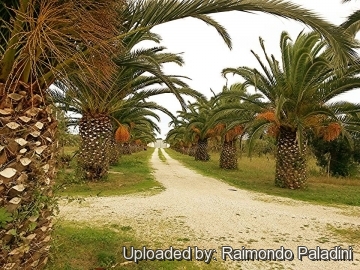 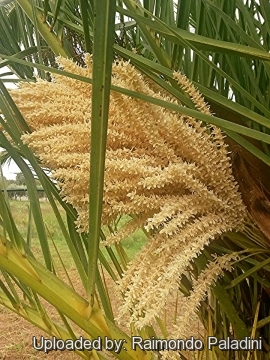 Cultivation and Propagation: Phoenix canariensis is a very popular palm in gardens and parks around the world in tropical, subtropical and temperate regions due to its huge imposing attractiveness and hardiness. It is adapted to a Mediterranean climate with cool, moist winters and summer drought, and can grow on poor and rocky soils.
Soil: It is very adaptable to many kinds of well drained soils.
Fertilization: Need a perfect fertilizer diet including all micro nutrients and trace elements or a slow release fertilizer applied in spring and summer, or according to package directions.
Water Requirements: It tolerates low levels of humidity and summer drought, though it prefers evenly moist but not consistently wet medium. When supplied with adequate moisture and fertilizer it is also fairly fast growing. This palm is very drought tolerant once established. It dislikes soggy soils. Water young plants for healthy look and fastest growth.
Light: It prefers bright sunny locations, but it also does well in part shade with some direct sunlight when young.
Aerosol salt tolerance: It is salt resistant and may be grown near the sea.
Wind resistance: It endures drying winds.
Hardiness: These palms are some of the hardier palms, tolerating winter frosts down to about -10/?12°C for short periods , although it will require some protection if cold periods are longer than normal. ( USDA Zones 8-10)
Roots: Usually not a problem
Maintenance: For the healthiest and most attractive plant, keep the palm pruned. As the old fronds die, these should be trimmed off and the leaf bases allowed to dry out.
Pest and diseases: Young plants are very susceptible to leaf spot and other fungus infections when grown in humid climates.
Uses: It is used in gardening and landscaping in many parts of the world though in sheltered areas it will survive prolonged periods below freezing point. It is not suited to small gardens, due to its eventual large size, and spined petioles. The huge bulk of the Canary Island palm dwarfs most houses. This palm is very good for adding a Mediteranean feel and widely used along boulevards, on campuses and in parks and grouped in trios to form focal points in cityscapes. Seedlings are quite slow, but speed up considerably once they start to trunk. Small specimens are inexpensive and readily available and look great in pots on the patio, near the pool, or in pairs flanking entryways. .And thanks to its drought resistance and durability to heat it can thrive in harsh urban conditions. Time to ultimate height 20-50 years.
Food uses: In the Canary Islands, the sap of this date palm is used to make palm syrup.
Propagation: It is exclusively propagated by seed.

by Forest Starr & Kim Starr
There are a total of 15 Photos.
Click here to view them all!
Cite this page: "Phoenix canariensis" Text available under a CC-BY-SA Creative Commons Attribution License. www.llifle.com 14 Nov. 2005. 23 Oct 2021. </Encyclopedia/PALMS_AND_CYCADS/Family/Arecaceae/24938/Phoenix_canariensis>