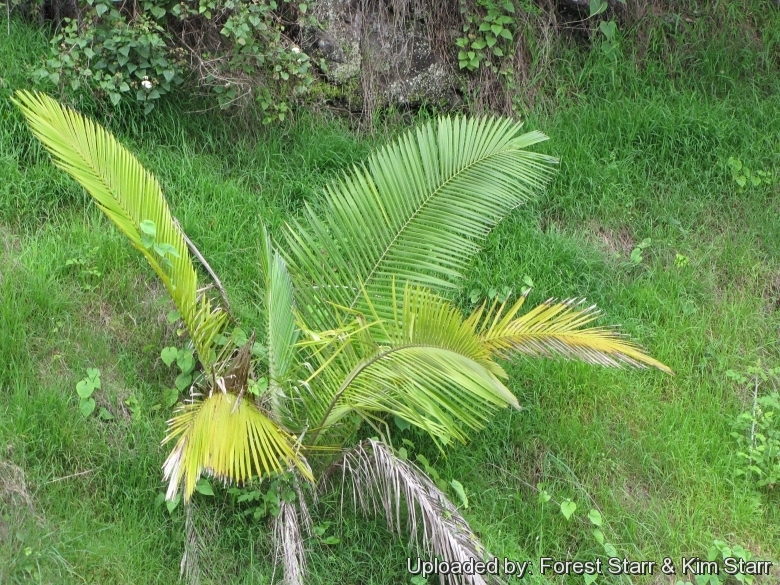 Origin and Habitat: Columbia (western slope of the Eastern Cordillera, and eastern and western slopes of the Central and Western Cordilleras) ,Venezuela (Distrito Federal, on the northwestern slopes of the Cordillera de La Costa, Aragua, and Táchira) and Equador (?)
Habitat: Cloud forest, in the premontane slopes at about 1400-2000 m above sea level in the Andes. It occurs even in those regions where the centigrade thermometer indicates 17°, and the medium temperature in which it vegetates is from 19 to 20° of that scale, consequently 17° lower than all the other palm trees. In Colombia, the species is particularly under threat from habitat conversion to agriculture, but trees survive in deforested areas or coffee plantations. Regeneration is poor.

Description: They are very tall, solitary, pinnate palms growing 10-30 m tall, but occasionally up to 45-60 metres, hence exceeding by about 24 m the loftiest palm trees on record. In their native habitat they grows at an extremely slow rate, on average they developed an aerial stem at the approximate age of 57 years and started flowering when they were approximately 83 years old. The maximum age of palm individuals growing under natural conditions is about 160 years or very rarely up to 210 years.
Root: Perpendicular, thicker than the trunk. This is a tillering palm, it exhibits saxophone style root growth (it has a heel), keep top third of heel above soil elevation.
Trunk: Solitary, 8-30 (or more) m tall, 19-30 cm in diameter, marked in its whole length with rings, the vestiges of the fallen leaves, internodes covered with thin layers of wax, white at the base, grey to brown towards the apex.
Crown: Crown hemispheric characterized by 8-20(-25) regularly arranged fronds with horizontal or slightly pendulous pinnae.
Crownsheath: 75-125 cm long, densely covered with thick, eventually deciduous tomentum of white scales.
Leaves: Pinnated; rachis 194-270 cm long; petiole, triangular, (10-)20-30 cm long with base ﬁlaments on each side 70-100 cm long; leaﬂets, coriaceous, numerous, dark green, powdery white underneath and split into two parts at the top.
Flowers/inflorescences: Dioecious (individual flowers are either male or female, but only one sex is to be found on any one plant so both male and female plants must be grown if seed is required) The inflorescence axes with reddish indumentum, staminate flowers with large and exserted anthers with a projected connective. The plant is not self-fertile.
Fruits: Mature fruits are orange red with warty exocarp and raised lenticels. 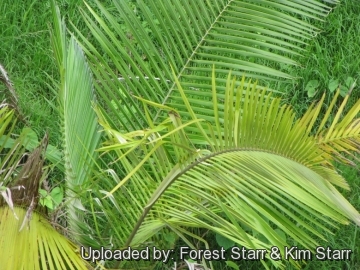 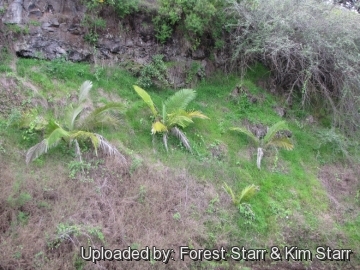 Cultivation and Propagation: It is a very slow growing palm that likes sandy soil, but is adaptable to clay and loam both slightly alkaline and acidic, but a humus-rich, acid soil suits it best. Good drainage is also important. It is suited for cool high humidity climates and tolerates several degrees of short-lived frost .
Fertilization: Need a perfect fertilizer diet including all micro nutrients and trace elements or slow release fertilizer. Micronutrient deficiencies are occasional problems and only show up on soil with a high pH.
Water Requirements: Needs regular water, do not let dry out between waterings. It endures cool and damp conditions for most of the year, however it does not want to sit in continually wet, mucky soil. The roots and lower trunk can rot if soil is kept too moist.
Light: It can grow in semi-shade (light woodland) or in full sun.
Hardiness: It is one of the hardiest palms, prefers a mild temperate climate, and doesn't like hot weather (doesn't like it over 30° C). It is hardy to USDA zone 9.
Maintenance: Prune diseased, damaged or drying fronds, but do not prune if the frond still has some green colour. Palms recycle nutrients from dead or dying fronds and use them for healthier fronds. Palms only have a set number of new leaves that can sprout and grow per year and removing fronds will not increase that number. If you cut off more than what will grow annually, you could be left with a pretty bare and bald palm.
Warning: The root system of this species is very sensitive and good sized specimen is extremely difficult to successfully dig and transplant to another location. Often moving or disturbing the roots in any way once over a certain size shocks the palm and it will suffer or die.
Uses: Ritual, protection, food, wax, ornamental
1) Ritual: The young leaves have traditionally been used in religious processions on Palm Sunday.
2) Protection: The stems are used as fencing around houses and farms, and to build walls.
3) Food: The fruit is probably edible and are commonly consumed by pigs and other animals.
4) Wax: It yields a resinous wax from the trunk which is mixed with tallow to make candles
5) Ornamental: It is cultivated as an ornamental tree, and planted in gardens and parks in temperate climates.
Propagation: Seeds germinate in 3 to 4 months in warm media and the seedlings are attractive. Grow on the plants in the greenhouse for at least their first two winters and plant out in the spring. Give the plants some protection from the cold for at least their first few winters outdoors.