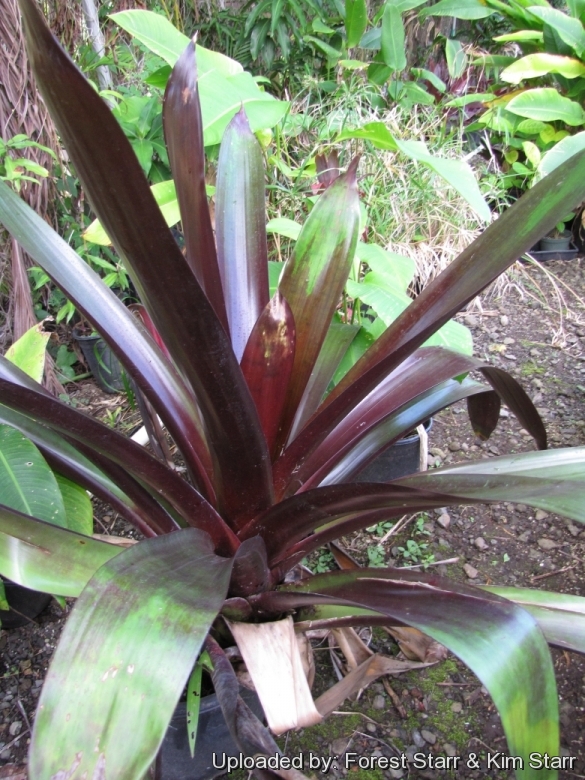 Origin and Habitat: Costa Rica to Colombia and on various Caribbean islands.
Altitude: From around sea level to 1200
Habitat: Vriesea sanguinolenta grows in moist tropical lowland to lower montane forests where it colonizes a number of host tree species high in the forest canopy.
Ecology: Flowering occurs in the rainy season and are pollinated mainly by glossophagine bats, fruits mature during the following dry season, and seeds are released in the second half of the dry season.

Description: Vriesea sanguinolenta, also known as Werauhia sanguinolenta, is a colourful tank-forming epiphytic bromeliad that can get really large like the giant Vrieseas or Alcantareas. Plant spans a meter when mature and grows up to 2 m high when flowering.
Leaves: About 10 rosulate; suberect, blades entire, 60–70 cm long, 8–10 cm wide, ligulate, subrounded with a long apiculus, inconspicuously lepidote, glossy, smooth, green to purple especially underneath, spineless and usually with large irregular spots of deep red especially near the base. Sheaths ovate-elliptic, the same colour as the blades but slightly broader. The purplish black form (a.k.a. forma rubra) is very priced and widely cultivated for its beauty; the amount of light influences foliage colour.
Inflorescence: Greatly exceeding the leaves and vaguely similiar to the Alcanterea Imperialis or Alcanterea Regina. Scape, erect, stout up to 150 (or more) cm tall, with thick, coriaceous, imbricate bract. Inflorescence up to 40 cm tall with 11–15-flowered suberect branches, the lateral ones up to 25 cm long. Flowers up to 5 cm long spreading. Sepals 30–45 mm long, coriaceous; petals white, slightly exceeding the stamens. Werauhia sanguinolenta is polycarpic, but individual shoots flower only once and it is at least facultatively autogamous.
Remarks: Werauhia sanguinolenta is heteroblastic, that is to say it produces diferent type of leaves in the rosette depending on age and development of the plant, the small juveniles possess non-impounding rosettes of small, linear leaves, which are densely covered by the shields of foliar trichomes that allows the shoot to assume a significant role in the uptake of water and mineral nutrients, while larger specimens have broad leaves, which overlap basally to forms a reservoir (phytotelma), in which rainfall and leaf litter can accumulate, allowing the plant to draw upon their water reservoir during periods of drought.

Cultivation and Propagation: Vriesea sanguinolenta is a bromelid of remarkable ornamental value, and of great landscape effect that is visible at a distance and looks great in a bromeliad bed. This plant can be grown as both epiphytic, but also as terrestrial, it is very durable and seems to thrive without a great deal of care.
Soil: This plant is epiphytic and can be grown attached to slabs or bark, but can be potted in a perfectly drained bromeliad mix or orchid potting soil. Minimum pH: 6.1 Maximum pH: 7.5
Light: Bright indirect light to half shade, with some direct sun in the winter. The foliage forms will develop better colour with slightly brighter light. Too much shade will cause leaves to look thin and leggy.
Water: It is moderately drought tolerant once established but fares best when given regular moisture. Keep some water in the centre and change the water once a week with tepid spring or demineralized water that has been allowed to stand for several hours. In presence of dry air and high temperatures, humidity can be incremented with nebulisations, whilst in winter with low temperatures it is better to leave it quite dry for avoiding possible rottenness.
Temperature: They prefer warm temperature which it is good to keep over the 12°C, best 20-24°C or above year-round, but can withstand short periods of colder temps. USDA Hardiness Zone 10a, 10b, 11
Fertilizer: Very sparingly with an all-purpose houseplant liquid fertilizer mixed at half the normal strength. Feed the leaves, roots, and reservoir. A foliar feed high in potash and low in nitrogen (other than in the form of urea) will increase flower size. High levels of fertility will leave a salt build-up on foliage.
Repotting: Pot up small offsets into 15 cm pots. Repot young plants after 2 years. Mature specimens will not need repotting.
Longevity: Individual plants live for 3 to 4 or more years depending on growing condition.
Grower's Tips: Remove old leaves from plant base and dead ﬂower spikes only. Remove older plant crown when it begins to fade.
Pests & diseases: Leaf spots (as a result of drying out), bacterial soft rot, scales and mealybugs but usually pesticides are not required. Rot may develop if soil is kept too moist.
Uses: In tropical areas it is favored as a landscape plant but it is also popular for interiorscapes. The dramatic leaf colours make this plant a strong focal point even when it is not in bloom. Because of its width, it is a good plant to display on a raised platform, with ferns or other low-light plants beneath it.
Propagation: Like all bromeliads, it are propagated by separating offsets from the mother plant. However Vriesea sanguinolenta send its pups from the base of the flower stalk near the center of the plant, as opposed to the more common side shoot. This makes collecting the offset harder, so let it stay on, replanting the offset only when it is at least 20 cm tall and the old rosette falls apart and discarding the parent plant. Usually this species produces only one new rosette of leaves. It may also be raised from deeds, it likes to germinate on coconut fibre. Then, as a seedling, it prefers organic compost based on coir with a bit of fine bark before being transplanted onto bark as a fully-grown plant. The wide scale reproduction for commercial purposes is done by micro-propagation. Of course tissue culture and pup production, being vegetative, ensures that the plants will be the same colour as their mother. Tissue culture can produce unlimited numbers of plants, while pup production is limited.