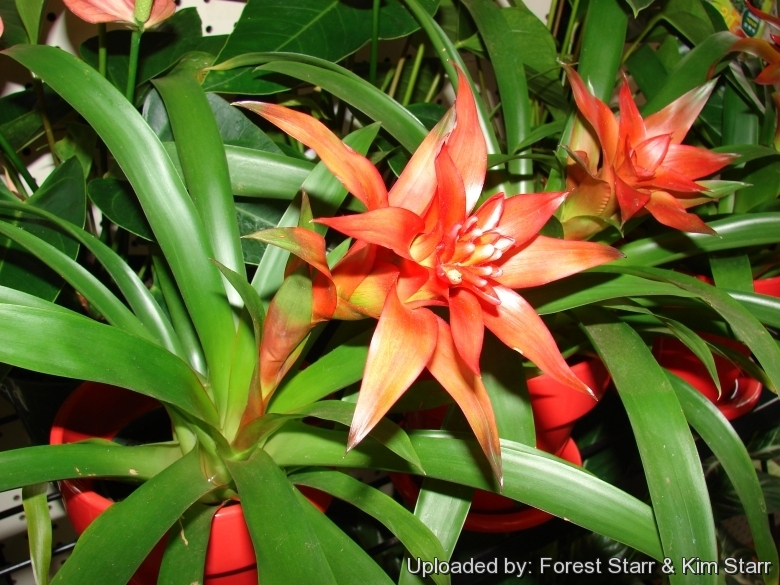 Origin and Habitat: Central and South America ( West Indies, Belize, Panama, Colombia, Venezuela, the Guaianas, Bolivia and southward into Brazil)
Habitat: Guzmania lingulata grows mainly in rain forests and cloud forest, especially in moist ravines where at least for part of the year, moisture is delivered solely as mist. Usually it grows rather close to the ground on small trees or branches. This species flowers mainly (but not exclusively) in the early rain season and the fruit mature from the latter rainy season and through the dry season. It is common to locally abundant.

Description: Guzmania lingulata (a.k.a. Scarlet Star ) is a glabrous spineless epiphyte bromeliad (that grows upon another plant for support). Scarlet Star is one of the most commonly cultivated bromeliad types with very showy brilliant red, pink or yellow spikes.
Rosette: Star-shaped, with 15-30 leaves, open, often broader than tall, about 25-40 cm tall, with a width of 30-60 cm wide. The foliage of the rosette overlaps basally to forms a reservoir (phytotelma), in which rainfall and leaf litter can accumulate, allowing the plant to draw upon their water reservoir during periods of drought
Roots: Small that serve for attachment only to a tree or moist rock..
Leaves: Thin and flexible, 20-35 cm long and 1-4 cm wide, green with a glossy sheen, ascending then spreading; sheaths ovate, brown lepidote; blade ligulate (strap-like), acute or acuminate, caudate at apex, the inner leaves held well above the scape.
Inflorescence: Simple, solitary, flat topped, cup-shaped, few flowered, 15-25 cm long, hold on a stout upright scape in the centre of the rosette and long-lasting. The outer scape bracts (modified leaves) leaf-like, the inner ones orange red, grading to red-orange tipped with yellow-orange, the innermost ones yellow-orange tipped with white, all becoming green in fruit. Floral bracts white tinged in yellow, about 4,5 cm long, a little longer than flower. Flowers are tiny, yellow tipped with white, almost hidden among the bracts and attracting hummingbirds; sepals slender, white linear, fused for most of their length, about 3,5 cm long. Pollen white, sticky in large clusters. The flowers fade but the showy stalk's bracts remain for weeks if not months later. Plants bloom once and then fade over a period of three years.
Blooming season: Usually in cultivation it flowers in the spring and summer's warmth months. A rosette usually reaches the flowering size in three to four years.
Fruits: Capsules, usually 3-sided, about 3 cm long and 5 mm wide, brown, acute at apex, the the valves splitting open at maturity and with numerous seeds.
Seeds: 1,5-2 mm long.
Remarks: Across its range it is quite variable, as some plant have variegated foliage and others have pink bracts. It has been used for breeding and is a primary parent for many of the variously coloured guzmanias widely used in interior scapes and tropical shade gardens. Cultivars produce blooms in a variety of colours, such as bright yellow, orange, mauve, and lavender.

Subspecies, varieties, forms and cultivars of plants belonging to the Guzmania lingulata group

Cultivation and Propagation: As Guzmania lingulata is native to rainforests, cool evening temperatures with warm days and high humidity describes its best growing conditions, however it grows very well as a home plant too. Individual plants live three to four years.
Growing substrate: This bromeliad grows as an epiphyte or saxicolous and requires a well-drained, aerated, porous and moisture-retentive substratum which is rich of organic substance, but best results are obtained when it is grown epiphytically and roots are covered with moss or coarse crushed tree fern fibre encased in a container or wired to the surfaces of boulders, rough bark, rock walls, or tree branches. Living among the branches of the south American rainforests bromeliads need very little root space so do not place in too large a pot. Root rot can be a problem if the soil is too moist. Continue to depot annually in the spring until the bromeliad fills a 10-15 cm pot. Small pots can induce blooms in mature plants.
Exposition: Grow guzmania in bright filtered light both indoors and out. In the garden it prefers partially shaded areas and grow best where they'll get morning sun, or shifting shade throughout the day. It adapts very well to deep shade and dim interior rooms, surviving well on fluorescent lighting alone. Low light often intensifies the bract colours that develop.
Watering: It enjoys constant moisture from rain or sprinkler. In dry and hot climate, humidity can be increased with nebulisations utilizing water at room temperature and not calcareous. In summer, some distilled water can be left in the central cavity formed by the rosette of leaves, renewing it frequently to avoid the formation of a mosquito larvae nest, whilst in winter it is better to leave it dry, thus avoiding possible rottenness. Keep humidity up by misting. Requires complete and perfect drainage. If you have one that is not flowering then keep very warm in the spring and water sparingly. To remove excess salt build-up, leach bromeliad pot once during the summer.
Feeding: Apply a very weak liquid feed every month or so over the growing season and a mild solutions (one-quartet strength) of foliar fertilizer at 3-month intervals to both garden and container plants. Apply fertilizer to leaves, roots, and reservoir.
Hardiness: It must be grown in a frost-free situation in open air in the tropical and humid subtropical climate countries, with temperatures which it is good to keep over the 14°C, best 20-24°C.
Pest & diseases: It is susceptible to scale, trips and mosquitos that will sometimes breed in the pools of water that are trapped between the leaves. Mealybugs infestations are also a frequent problem.
Tip: Remove old leaves from plant base and dead ﬂower spikes only. Remove older plant crown when it begins to fade.
Use: Use it as a houseplant or patio container filler, or under tropical shade trees as a groundcover or accent. Display on a windowsill that receives bright, indirect light.
Propagation: When the flower spike fades (6 weeks or more after it appears), pups appear near the base of the plants. When the offsets are 7.5 cm tall, they are ready to be repotted. Be sure to provide high humidity for a month after propagating the offsets. It may also be grown from seed: remove seeds from inﬂorescence and lay them uncovered on a bed of crushed tree fern fibres; keep constantly but moderately moist. Starting from the seed, 5-6 years are needed for the blossoming, whilst at least 3 years are needed by division. The wide scale reproduction for commercial purposes is done by micro-propagation.