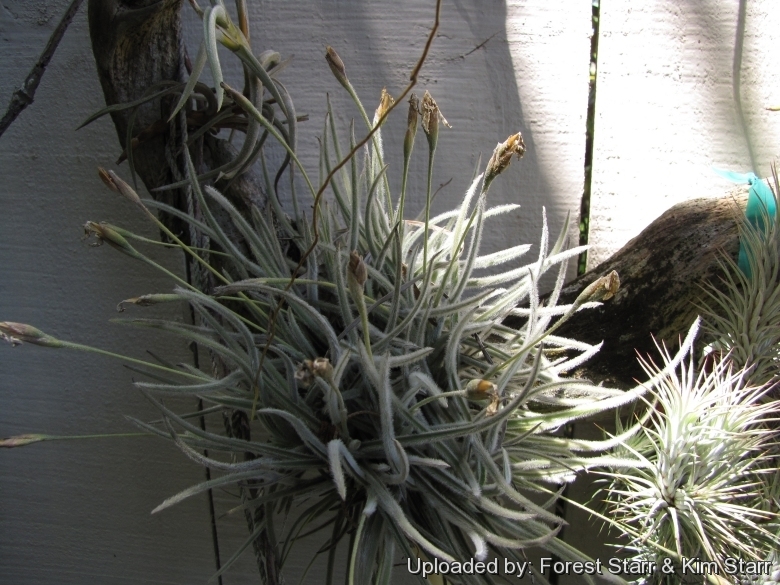 Description: Tillandsia crocata is a xerophyte, epiphytic or saxicolous (rock-dwelling) bromeliad with silvery grey-green leaves. It may be simple or or spreading through few branched horizontal rhizomes and forms miniature bundled clumps about 10-20 cm tall and wide. Its delightful yellow flowers waft one of the strongest and most delightful fragrance of any Tillandsia and warrant its great desirability among collectors.
Stem: Short-stemmed
Rosettes: Untidy with distichous (in opposing rows), spreading, and slightly recurved or reflexed leaves.
Leaves: Up to 15 cm long, tough, linear, attenuate, involute, stems like, semi-cylindical and channeled on the top surface, greenish to grey-green, with entire margins, coated by dense silvery coarse scale-like trichomes, the wings of which are large and elongated on one side. By rising up from the leaf surface, the wings aid in the epidermal drying process by facilitating greater air movement. This faculty is essential for clumping species that receive water frequently at certain times of the year.
Inflorescence: It produces a fine extended scape that subtends the simple, distichous inflorescence with 2-4 flowers. The densely lepidote floral bracts are imbricate.
Flowers: Funnel-shaped, bright canary-yellow or buttercup-yellow, that have 3 petals with one of the sweetest fragrances in all the bromeliad world.among gray-scaled floral bracts.
Blooming season: Spring.
Fruits: Septicidal capsules. 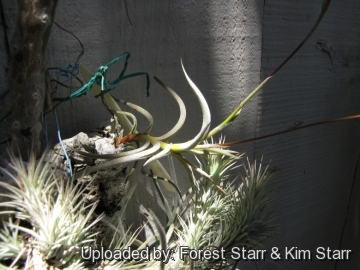 Cultivation and Propagation: Tillandsia crocata is easy to grow, drought tolerant, and will thrive within a broad latitude of care conditions. Locate in a well ventilated place. Tillandsia crocata is perhaps the best of the fragrant tillandsias for cultivation due to its tiny size.
Soil: This species prefers to be grown without soil mounted on wood or grown bare root on slabs of bark or tree fern fibre or on nearly any substrate. A and, if potted, it must be in a free-draining soil (i.e. leaf mold, peat and sphagnum added with perlite, sharp sand or orchid bark). pH Range 5,5 to 7,5.
Exposure: This plant likes bright indirect light and protection from hot sun, it is best placed in a sheltered spot in the garden during the summer to facilitate flowering. In a dark location the plant will gradually weaken and wither.
Fertilizing: It should be watered with a liquid fertilizer diluted to ½ the strength recommended on the label added to the current irrigation water once a month from spring to autumn. Can also be applied to the leaves.
Waterings: Allow medium to dry out between watering. From mid spring through fall, mist daily. If grown outdoors, keep dry during winter. Tillandsia crocata is quite drought tolerant, however because of its small size cannot survive lack of water or humidity for as long as more succulent and larger-leaved species such as Tillandsia duratii. All of the leaf surfaces should dry between waterings. If the plants in a clump become wet and remain so for a few days they may suffocate and die. In a clump, air cannot circulate among the leaves as well as in individual plants.
Temperature: It must be grown in a frost-free situation in open air in the tropical and humid subtropical climates, with temperatures which it is good to keep over the 8°C, best 20-24°C.
However its cultivation can be tried also in the warm temperate climates, in sheltered position, as it can stand, for short time, temperatures around the -2°C (but plants foliage will suffer little cold damage where frost settles on them). Winter hardy to USDA Zones (9b-)10-11. North of Zone 10, this bromeliad is usually grown in containers that must be overwintered indoors.
Pest & diseases: No serious insect or disease problems. Watch for aphids, thrips and scale. Mealybugs infestations are also a frequent problem. Rot may develop if soil is kept too moist.
Maintenance: Transplant them in spring
Propagation: Division or seed. The primary plant tends to die off after flowering, but will be replaced by the offshoots. Plants can be divided at any time of the year. Seeds are germinated on peat moss. Seeds need light to germinate.