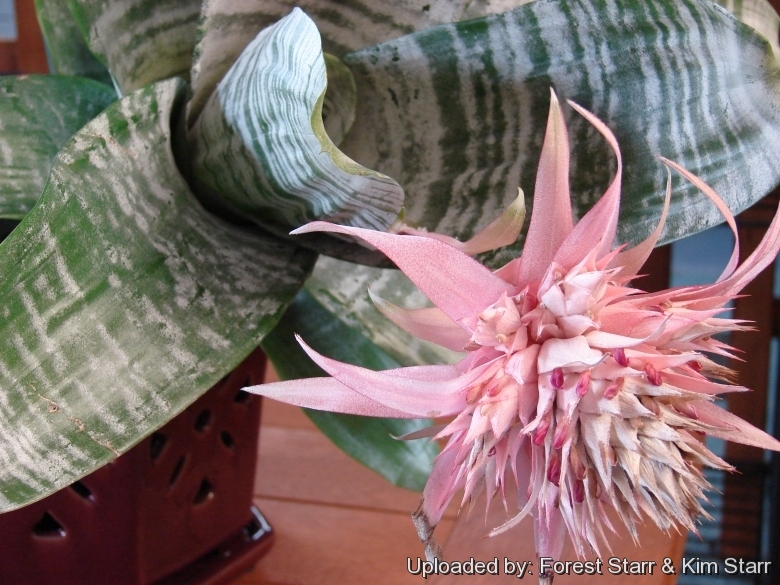 Origin and Habitat: State of Rio de Janeiro (Brazil)
Altitude: 500-1200 metres above sea level.
Habitat: It grows in the pluvial forests in large colonies along the branches of trees and on other substrate not properly called soil.

Description: Is is a stiffy herbaceous epiphytic bromeliad that grows slowly, reaching to between 30 to 90 cm in height, and spreading up to 60 cm. This plant is probably the best known species in this genus, that was introduced into European Hoticulture in 1826, and since then has become one of the most popular houseplant in temperate areas, especially noted for the beauty of its silver foliage banded with streaks of lighter greyish-green and long-lasting pink flower spike. It is a monocarpic plant (bearing fruit only one time during its existence)
Stem: Almost acaulescent or with a very short, trunk-like stem a the base of the rosette.
Rosette: Composed by leaves overlapping each other in a formal funnel-shaped arrangement and curved gracefully outward and downward producing the effect of a frozen fountain. Bromeliads are often referred to as tank plants, since the spiralling leaf bases of a rosette overlap so tightly that forms a central well-like enclosure that water collects in it.
Leaves: Elliptic–oval-shaped, 45-90 cm long and 6-8 cm broad, green-grey coloured due to the presence of microscopic grey scales spread uniformly or forming horizontal stripes, margins with about 4 mm long brown spines; apex rounded, but provided with an about 4 mm long terminal thorn.
Flower: The inflorescence rise out of the centre of the rosette, is formed by an 20-40 cm long, reddish brown, floral scape, covered by a thick white tomentum and provided of bracts. The scape ends in a thick, pyramidal compound raceme, that is, formed by several racemes departing from a central axis wrapped by triangular pink bracts and covered by a thin white tomentum.
The flowers are small, capsular, blue, turning reddish-pink by the end of the blossoming. The flowers are self sterile, therefore the pollen of another plant is necessary for getting fruits.
Blooming season: The plant is long-day and therefore its blooming can be easily programmed for every moment of the year by varying in special greenhouses the length of darkness and light. The flowers are long lasting, even six months.
Fruit: Small globular berries covered by a white tomentum, which ripen in 8-9 months.
Seeds: Fusiform, about 2 mm long 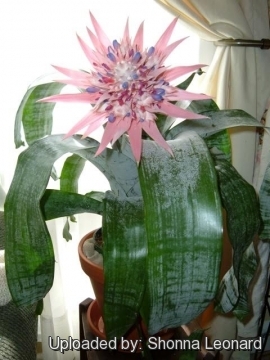 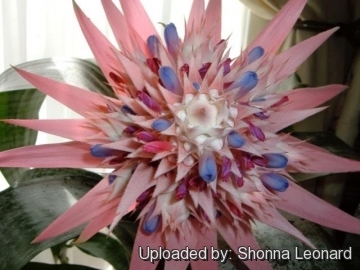 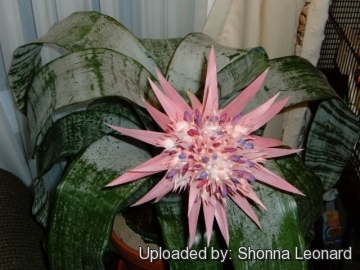 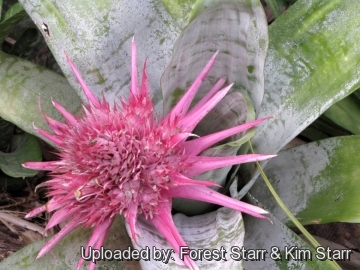 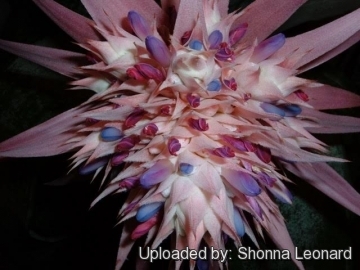 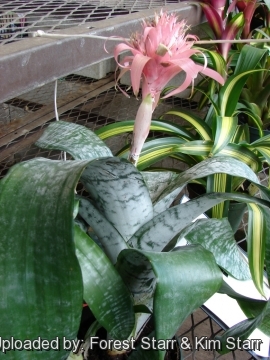 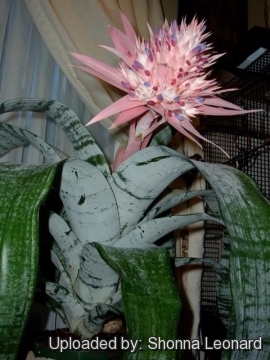 Aechmea fasciata Photo by: Shonna Leonard
Send a photo of this plant.

Cultivation and Propagation: The plant is one of the most popular and known ornamental bromeliads due to the beauty of the foliage and of the inflorescence and the facility of cultivation.
Growing substrate: It requires a well-drained, aerated, porous and moisture-retentive substratum which is rich of organic substance, but it does not grow its best in in soil; best results are obtained when it grown epiphytically and roots are covered with moss or coarse crushed tree fern fibre encased in a container or wired to the surfaces of boulders, rough bark, rock walls, or tree branches. Root rot can be a problem if the soil is too moist.
Exposition: Prefers partial shade but can even tolerate the full sun.
Watering: It enjoys constant moisture from rain or sprinkler. In dry and hot climate, humidity can be increased with nebulisations utilizing water at room temperature and not calcareous. In summer, some distilled water can be left in the central cavity formed by the rosette of leaves, renewing it frequently to avoid the formation of a mosquito larvae nest, whilst in winter it is better to leave it dry, thus avoiding possible rottenness. Requires complete and perfect drainage.
Fertilizing: Apply mild solutions (one-quartet strength) of foliar fertilizer at 3-month intervals to both garden and container plants.
Hardiness: It is cultivated in open air in the tropical and humid subtropical climate countries, with temperatures which it is good to keep over the 14°C, best 20-24°C , but can withstand light frost for short periods if very dry (hardy down to -2 to -6º C, even if with damage to the foliage) in these situations it will better resist if sheltered by the winter rains, seen that the humidity and low temperatures render it more sensitive to rottenness.
Pest & diseases: It is susceptible to scale, trips and mosquitos that will sometimes breed in the pools of water that are trapped between the leaves. Mealybugs infestations are also a frequent problem.
Pruning: Remove old leaves from plant base and dead ﬂower spikes only. Remove older plant crown when it begins to fade.
Use: Specimen plant; mass planting; container plant; tropical foliage and colourful ﬂowers.
Propagation: Remove and replant offshoots from the base of the parent plant. May also be grown from seed: remove seeds from inﬂorescence and lay them uncovered on a bed of crushed tree fern ﬁber; keep constantly but moderately moist. Starting from the seed, 5-6 years are needed for the blossoming, whilst at least 3 years are needed by division. The wide scale reproduction for commercial purposes is done by micro-propagation.
Warning: Has sharp spines that deter some gardeners.