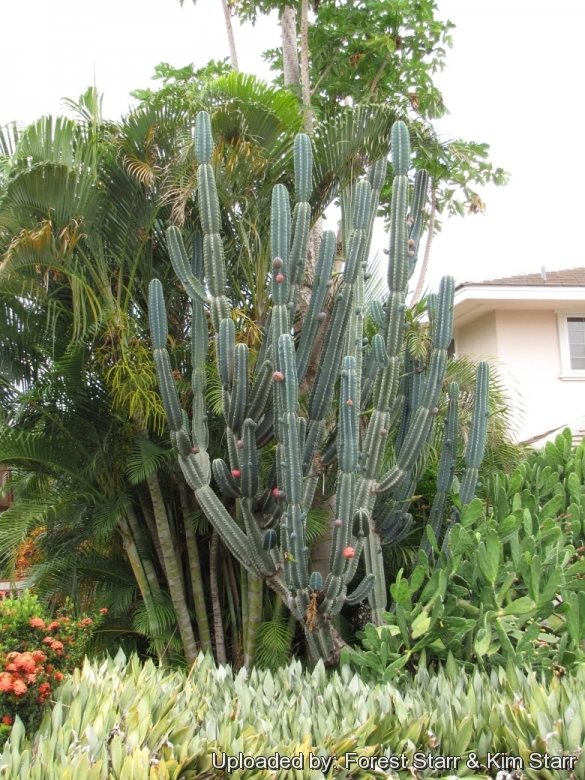 Origin and Habitat: Distribution is very uncertain, probably Brazil (Mato Grosso do Sul, Minas Gerais, Paraná, Rio de Janeiro, Rio Grande do Sul, Santa Catarina, São Paulo), Argentina, Paraguay, Uruguay, but is so popular for its large, spineless fruits that it has spread over most of tropical and neotropical South America, belying its wild origin. It is also widely cultivated worldwide as an ornamental plant. Cereus hildmannianus has also been introduced outside its native ranges and become invasive.
Type locality: State of Rio de Janeiro, Brazil.
Altitude range: From sea level to 1,000 metres above sea level.
Habitat and Ecology: Cereus hildmannianus grows in southern humid/subhumid forest, in rocky places and on dry shadows soils in mata de planalto, in cerrado and pampas where is found on rocky outcrops. The major threat is habitat loss due to urbanization, agriculture, cattle ranching and forestry. Pollinators include hummingbird, carpenter bees, honeybees, houseflies, wasps, and a host of lesser arthropods in the daytime, but moths and nectar-eating bats are the principal pollinators at night.

Description: The Peruvian apple cactus or Hedge cactus (Cereus hildmannianus) is a perennial treelike cactus that grows like a candelabrum with numerous columnar branches, 5-10(-15) m high with distinct trunks. It produces numerous showy white flowers 10-15 cm across that are followed by goose-egg-size succulent fruits containing a delicately sweet white pulp with delightfully crunchy black seeds. It possess the added virtue that its stems are free of spines and can be handled it without worrying about impalement. Two subspecies are recognized, the nominate and subsp. uruguayanus (R.Kiesling). The latter usually much more spiny.
Stems: Cylindrical, segmented, bluegreen to dull green, often glaucous when young, to 15 cm in diameter.
Ribs: (4-)5-6(-8), thin to obtuse, slightly indented, 2.5-3.5 cm high, rounded, green often with large yellow patches along the sides.
Areoles: Distant, brown, large 2 cm apart.
Spines: Usually absent, occasionally a few golden or brown spines develop afterwards.
Flower: Very large, nocturnal, elongated, funnelform, 20 to 30 cm long; inner perianth-segments white, broad and obtuse ovary naked, 2.5 to 3 cm long.
Blooming season: It blooms at night in spring through summer. The buds grow quickly, shooting out from the branches like so many small snakes. Within two weeks, dozens of flowers open, always at night and all or nearly all flowers open simultaneously at the same time. By midmorning the following day, all had closed and drooped. This is apparently a water-saving strategy by cacti. The plant usually buds and flowers about two weeks following any warm-season rain. The fruits usually ripen within a month. Buds may erupt well into fall, even early winter, if sufficient temperatures and rains fall. During dry times, the buds often fall off prior to opening.
Fruits globose: Pear-shaped, red with white pulp. The Peruvian apple cactus may produce fruit 3-4 years after propagation from seed.

Subspecies, varieties, forms and cultivars of plants belonging to the Cereus hildmannianus group 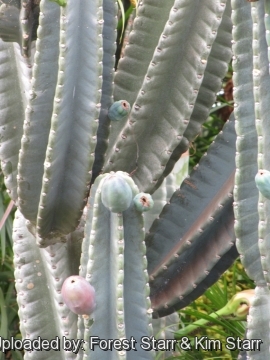 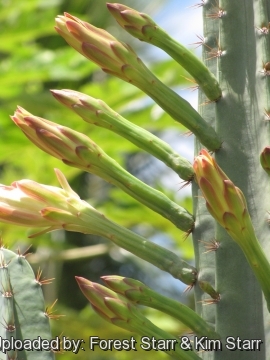 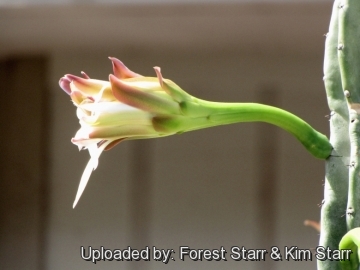 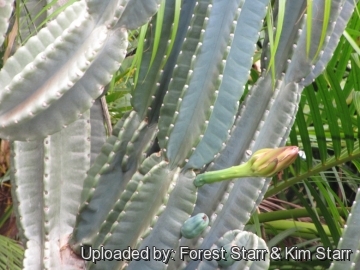 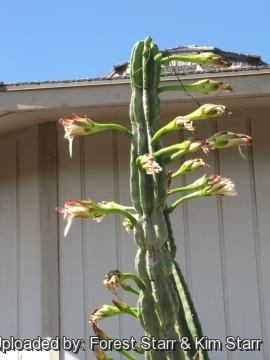 Cultivation and Propagation: Cereus hildmannianus is well known to cactus fanciers throughout the world. It is very easy to cultivate, easy to propagate, tolerates moderate frost, and produces numerous showy white flowers 15 cm across. It is one of the most widely cultivated cactus species. The fruits are edible, and it is used for living fences. Even more intriguing, the apple cactus is widely touted as having the power to correct physical ailments caused by electromagnetic radiation. How and why this particular virtue was discovered are unclear, but the plant is widely sold potted with the recommendation that it be located near a computer screen or television in order to re-establish an electromagnetic equilibrium upset by the device. Or some such thing.
Growth rate: It grows quickly (a young plant will easily grow more than a 30 cm per year) and a plant grown in loose fertile soil with ample water availability may get up to 9 metres tall with dozens of branches in only 10 years.
Soils: For pot culture it needs standard cactus soil. Outdoors needs well drained spots, with deep soil, but will still thrive in less than ideal conditions. The species is sensitive to salinity.
Repotting: Since they are big-sized plants, they need plenty of space for their roots. Repotting should be done every other year, or when the plant has outgrown its pot. Use pot with good drainage.
Watering: Water regularly in summer, but do not overwater and allow to dry fully before watering again. Its roots are easily lost in pots that stay damp for any length of time. It should not be watered at all in winter. In the rest period no high atmospheric humidity!! Care must be taken with watering as they tends to become swollen and untidy in growth habit if given too much water and shade.
Fertilization: During the growing season enrich the soil using a fertilizer rich in potassium and phosphorous, but poor in nitrogen, because this chemical element doesn’t help the development of succulent plants, making them too soft and full of water.
Hardiness: Reputedly sensitive to frost , but less so if kept on the dry side prior to, and during, cold weather (hardy to -5° C for short periods). However some warmth throughout the year will increase the grower's success (minimum 5° to 8°C during rest season). In presence of high atmospheric humidity make sure that your saguaros are not exposed to freezing temperatures, or they may die. Outdoors this plant is very adaptable, as long as you avoid excessive humidity in the winter months.
Exposition: Light shade when young, full sun later. Outside it likes strong sunshine, but is tolerant and do well with light shade during the hot Summer months, inside it needs bright light, and some direct sun.
Garden uses: Excellent as landscape or patio plant. It is suitable for “desert” gardens, in association with other xerophytes. Where the open air cultivation is not possible due to the climate, it is to be cultivated in pot in order to shelter it in winter. It look fine in a cold greenhouse and frame. Slow growing and delicate cactus species can be grafted on Cereus peruvianus root stocks to provide faster growth.
Food uses: It often produces more than one hundred delectable fruits each year, all of which act as bird magnets. The fruits are edible and can be eaten fresh, dried or made into a juice. Once harvested, the ripe fruits must be eaten within twenty-four hours, or they begin to ferment. Experimental growing of the plants in the harshly dry Negev Desert of Israel has proved promising for fruit production.'Plants irrigated with freshwater produced more than 20 kg of fruits only six years after planted as cuttings.
Other uses: The cactus is cultivated for use as a living fence. To make a fence people break off the straight lateral shoots of the height required and plant them closely side by side in a trench sufficiently deep to ensure their standing firmly. A hedge perfectly impassable is obtained at once the cactus rooting so readily that it is rare to see a gap. Slow growing and delicate cactus species can be grafted on Cereus hildmannianus root stocks to provide faster growth.
Pests & diseases: It may be attractive to a variety of insects, but plants in good condition should be nearly pest-free, particularly if they are grown in a mineral potting-mix, with good exposure and ventilation. Nonetheless, there are several pests to watch for:
- Red spiders: Sensitive to red spider mite. Overhead watering is helpful in controlling mites.
- Mealy bugs: Occasionally mealy bugs they develop aerial into the new growth among the wool with disfiguring results, but the worst types develop underground on the roots and are invisible except by their effects.
- Scales: Scales are rarely a problem.
- Rot: Rot it is only a minor problem with cacti if the plants are watered and “aired” correctly. If they are not, fungicides won't help all that much.
Propagation: From cuttings in spring (let them dry till the ends callous well). Then replant them in fresh cactus soil that is ever so slightly moist, and keep them that way till they root), or by Seeds (Seeds should be sown in a well-drained soil mix. Surface sowing is the best; seeds germinate in 14-28 days at 25° C . The seedlings should not be disturbed until they are well rooted, after which they can be planted separately in small pots. The cuttings grow rapidly into a tall columnar.