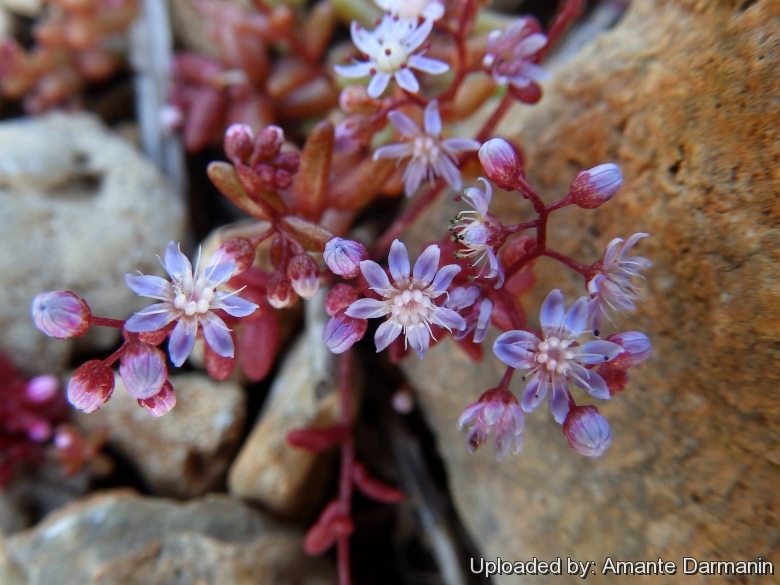 Description: Sedum caeruleum is an annual, succulent, bushy herb, glabrous or sparsely glandular-pubescent throughout, simple or much branched from the base, erect, 5-15(-20) cm tall. The leaves are narrowly oblong and usually tinted red. It is a very distinctive species, not the least because of its attractive star-shaped, blue flowers — a colour otherwise not reported for species of sedum and altogether rare throughout the world of succulent plants, and is highly worthy of every attention that may be bestowed upon it. It is rather variable with regard to flower colour and hairiness.
Stems: Erect or ascending, simple or branching at the top, bright red.
Leaves: Alternate, sessile, ovate to oblong or almost linear, 5-25 mm long, to 3.5 mm thick, blunt or rounded, terete to semiterete, shiny, green, often suffused with red.
Inflorescences: Lax cymes with 2 to many, sometimes forked (in large inflorescences) cincinni; Bracts leaf-like to small. Pedicells 3 - 7 mm long.
Flowers: Typically with 5-9 petals (mostly). Sepals, pale green, broadly sessile, basally connate, ovate, to 1 mm, obtuse. Petals free, stellately spreading, oblong-lanceolate, 2-4 mm, obtuse, subapiculate, blue, pale blue or white (rarely pinkish). Filaments 14 white. Anthers red, often dark blue. Nectars minute, obovate, stipitate, white.
Fruits (follicles): Erect, eventually reclined, tappering to a thin point ( stylus) greyish, centrally papillate, with only 1 or 2(-3) seeds each.
Blooming season: The flowering period is spring (from March to June).
Seeds: Ovoid, dark brown. Ribbed.
Chromosome number: 2n = 26, 28. 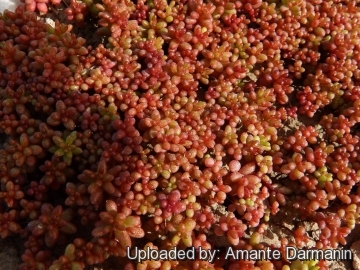 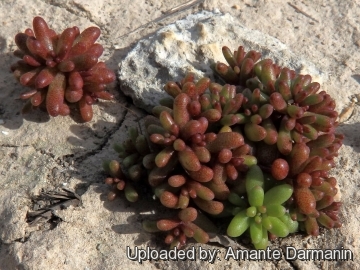 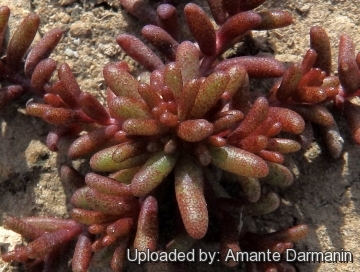 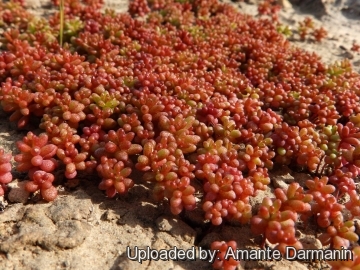 Cultivation and Propagation: Sedum caeruleum is a succulent annual sedum, with true blue flowers as the species name suggests. It is only rarely seen in cultivation as it has to be raised from seed every It grows as a small-scale ground-cover which spreads outward over time, and (when planted outside), they changes their appearance altogether, going burgundy in the leaves and becoming a bit scraggly. S. caeruleum can tolerate sun, shade, and dry soils, but looks its best only when given adequate light levels and water, and ideally should be grown outdoors in full sun. With its extreme drought resistance, S. caeruleum needs only minimal care to reward you with its attractive texture.
Exposure: It prefers light shade with ample airflow rather than full sun, except in cool coast-side locations. Bright light is required to prevent "stretching" of Sedums ("stretching" occurs when a moderately fast growing plant such as an Sedum, is grown in dim light or over-fertilized, which causes overly lush growth that contributes to weak, pallid plants).
Waterings: Sedums are able to tolerate extended dry periods and survive drought without the need for watering, but they will grow stronger if they receive adequate moisture during their growing season, but never allowing the plant to remain waterlogged (root rot sensitive). Avoid overhead watering under humid conditions, especially during winter.
Soil: It is essential in cultivation to use a very porous soil, which will allow quick drainage. Avoid limestone substrates (calcifuge). Sedums are shallow rooted plants, and therefore benefit from good levels of organic matter in the soil. Give it enough root space for optimum growth.
Ventilation: Good air movement is important for minimising pest and disease risks, and avoiding excessive humidity in cool winter conditions is important to successfully growing Sedums in the nursery environment.
Hardiness: Though not terrifically cold-hardy, it can take overnight temperatures to -3 C however, the ideal temperature range during the summer growing season is 5-25°C, with the cooler autumn temperatures tending to make their foliage colours become more intense than those of the active summer growing season.
Pests and diseases: Aphids like this plant (and all flowering sedums).
Therapeutic uses:The aerial parts of S. caeruleum are historically used in Sardinia as a healing remedy in case of burns and minor injuries. The juice has antioxidant, anticholinesterase, and antibacterial activities, and to better express its effectiveness, must be obtained at the time of use by squeezing or pounding fleshy, fresh leaves.
Propagation: Seeds.