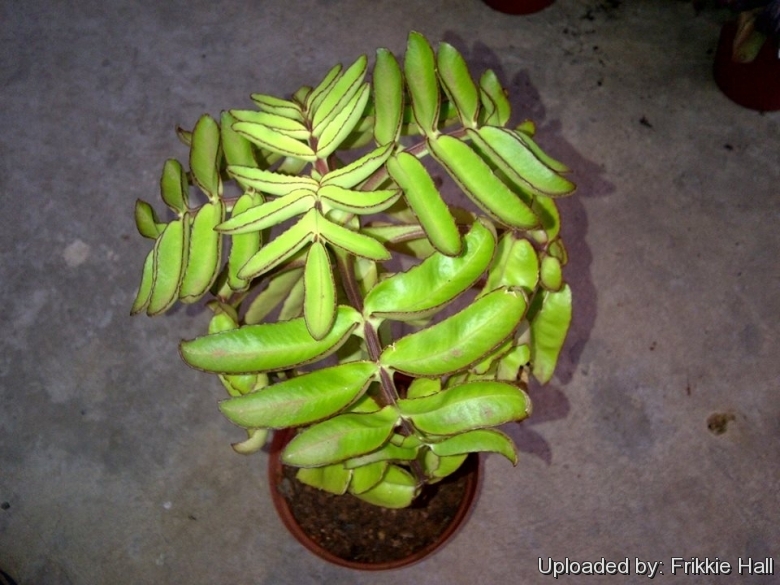 Origin and Habitat: Native of Madagascar. Cultivated and sometimes a garden escape in tropical areas in the Amazon, Africa, Asia, Australia and elsewhere in the tropics. It is considered an invasive weed in some areas including parts of South Africa and Australia.

Description: Remarkable on several accounts, Kalanchoe prolifera is a giant fast growing succulent from the island of Madagascar, home of many oddities, this being no exception. It forms what looks like a green, ringed trunk with stout rubbery fishbone leaves, maroon-rimmed, succulent and rigidly ranked on the top. Leaves somewhat reminiscent to mother of thousands (Kalanchoe x houghtonii), but usually without the dinky little leaflets along the leaf margins. In bright sun will develop some pink/red colouration. Terminal inflorescence of yellow flowers, each peeping from a bizarre dangling four-sided box-like bract gives the plant the common name Blooming Boxes.
Habit: It is a perennial or biennial succulent herb, shrub, erect up to 3-4 m in height, but usually, before it actually gets that tall, it falls over and continues to grow along the ground, slowly curving up again... the stem where it fell can grow roots, too... sort of becomes invasive that way. Plantlets form along the inflorescence after the flowers fade, soon dropping to the ground and rooting. Plants also spread via underground stolons. It is a monocarpic specie, but sometimes it happens that the foot keeps some living buds and gives rise a new plant the following year.
Stems: Thick, nearly woody below, rubbery and waxy above, erect or ascending, simple, terete, glabrous, emitting sterile shoots at the base.
Leaves: Large, decussate (in opposite pairs), petiolate, stout, very fleshy, rubbery, impari–pinnately divided (fishbone-like), rarely undivided, glabrous, green to blue green, rigidly ranked on the erect trunks. Segments 7–15 long and 1.5–5 cm broad, oblong, ovate–oblong or oblong–lanceolate, asymmetric and decurrent at the base, crenate or again pinnatisect, obtuse at the apex. petiole up to 16 cm long, rather broadened at the base, amplexicaul. Leaves may bear plantlets along their margins.
Inflorescences (cymes): Towering candelabra-like. Cymes disposed in a terminal 40–80 cm tall and 20–40 cm wide panicle, frequently with numerous abortive flowers replaced by pseudobulbils of minute leaves. Pedicels 8–15 mm long, very slender, densely papillose (papillae short, obtuse). Flowering stalks with large green box-shaped buds that open to reveal the flowers.
Flowers: Pendulous Greenish-yellow bell-shaped with rose-pink tips. Calyx inflated–subcampanulate, bluntly 4–angled, green, shortly papillose; tube 13–16 mm long. Lobes 3.5–4 mm long 5.5–7 mm wide, semiorbicular, shortly acuminate–cuspidate. Corolla–tube 18–24 mm. long, constricted above the carpels, suburceolate upwards, green. Corolla–lobes 2.5–3.5 mm long and 3–4 mm wide, subovate, suddenly acuminate–cuspidate, spreading, yellow. Stamens inserted below the middle of the corolla–tube, distinctly exserted. Anthers 2–2.5 long 1.5–1.5 mm broad, ovate. Carpels 7–8 mm long, connate at the base. Styles 17–20 mm long. Scales 1.5–1.5 mm 2–2.5 mm, semicircular, emarginate.
Blooming season: Winter or early spring. 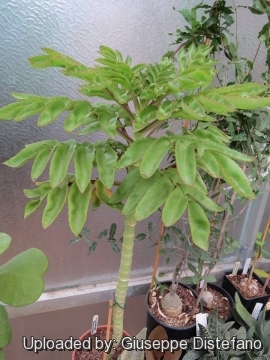 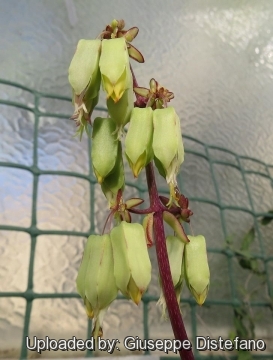 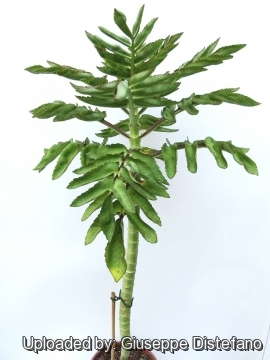 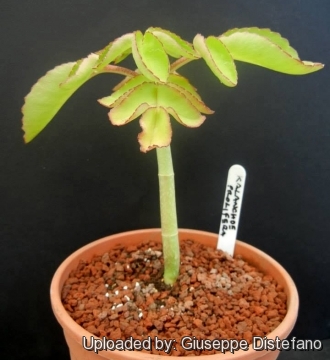 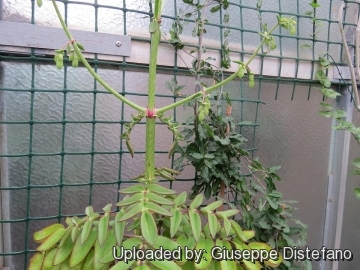 Kalanchoe prolifera Photo by: Giuseppe Distefano
Send a photo of this plant.

Cultivation and Propagation: Kalanchoe prolifera are very easy pot plants due to their drought tolerance. These succulents make a spectacular specimens for warm-climate gardens or large sunny rooms. Architecturally intriguing, these rubbery, extremely handsome, sculptures have become quite popular as an addition to summertime urns as accent plants in recent years. If planted directly in a garden bed, they can easily reach 2,5 metres and produce enormous candelabra of blossoms. Growing this kalanchoe in a container or pot restricts their growth They are absolutely gorgeous as a cut flower in a tall stemmed green vase. However the flowers are produced only by healthy plants grown on optimal conditions.
Potting mix: They thrive in nutrient porous soils consisting of equal parts of loam and sand, with pumice or lava grit added to ensure good drainage.
Repotting: Repot them in Autumn and left outside in a bright but cool and dry location until first frost. The cool temperature along with the shorter days at the back of the Solarium where the light levels are relatively low stimulate the production of abundant flower buds.
Hardiness: Kalanchoe prolifera isn't hardy to severe freeze, but seem to tolerate everything else. It need to be covered at least and housed in cold climates.
Waterings: Water only when soil is dry, and withhold water in winter.
Exposure: This plant thrives in full sun in moderate climates but needs midday shade in hot areas.
Maintenance: Be careful with this species in outdoor culture, once it gets into a planting bed it is almost impossible to get rid of it, a few tiny plantlets seem to survive any attempt to weeding them out every time, and then they reproduce like crazy again. Good thing they don't have nasty roots- they can be pulled or scooped away where not wanted. It is best to grow them outside over the summer in an oversized pot so they grow large quickly with the extra fertilizing.
Traditional medicine: Leaves anti-inflammatory, antiseptic, counter irritant and sedative; fresh leaves used as a poultice in the treatment of boils, wounds, burns and scalds.
Warning: The plants are highly poisonous to humans and domestic animals, especially cattle, sheep and goats. Poisoning may be acute or chronic, the latter due to the cumulative effect of the toxins.
Pests and diseases: May be susceptible to mealybugs and rarely scale. Protect from cold.
Propagation: Any part of the plant can be used for propagation. It generates lots of mini-plants on the tips of the flower stalks. It may also produces some offspring at the margin of its leaves but every part of it will root and grow new plants.