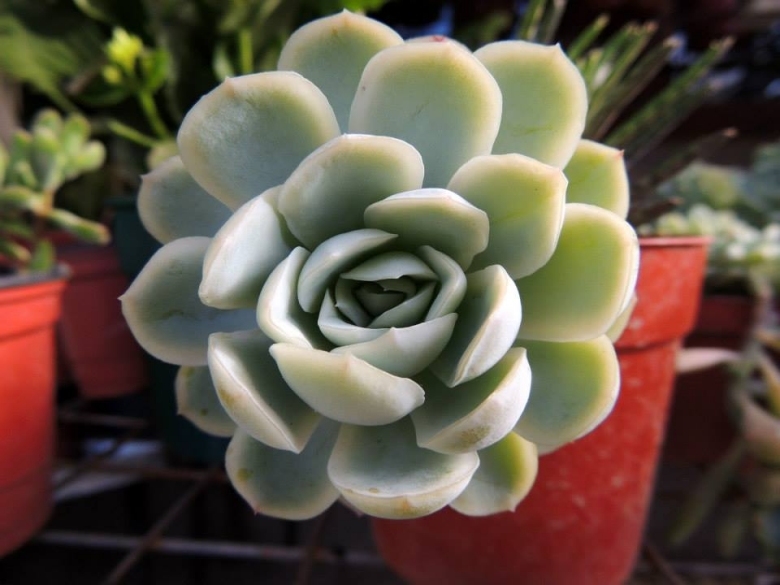 Origin and Habitat: Central Mexico, State Hidalgo, in the Mountains near Pachuca, Penas de Jacal and adjacent areas.
Habitat and ecology: It grows in rock crevices and on rocky outcroppings in semi-arid habitats in the Chihuahuan-Tehuacan Deserts.

Description: Echeveria elegans, called Mexican gem and Mexican snowball, is a stemless echeveria forming charming, symmetrical rosettes of neat, bluish-white, fleshy leaves close to the ground; some look like alabaster roses. It produces pink or red flowers, tipped yellow, from late winter to mid summer. It is very floriferous. This species has long been one of the most popular with collectors and in nurseries and gardens. It is a bit variable in nature, and collected extreme forms were early published as full species or as varieties, but these were too weak botanically to stand, so they are all combined in Echeveria elegans.
Habit: Echeveria elegans is a succulent, evergreen, perennial growing in dense mats because of the numerous "daughter" rosettes on long stolons which can be separated from the parents in spring, and grown separately - hence the common name "hen and chicks", applied to several species within the genus Echeveria. Mats can rich a height of 5–10 cm and a diameter of 50 cm.
Rosettes: Densely leafed, geometrically perfect, up to 15 cm across, stemless.
Leaves: Obovate, rounded above, pointed, rather thick, fleshy strongly pruinose, alabaster-white, glabrous, 30-70 mm long, margins often reddish, sometimes also transparent, upper surface somewhat concave (spoon-shaped) or almost flat.
Inflorescence: Scape slender, pink, 10—25 cm. long, raceme bent to one side, with 5—10 florets.
Flowers: Corolla 10 12 mm. Long, coral-pink with yellow tips.
Chromosome number: n=31, 32, 34, 60, 62-63, 96, 120-130.

Subspecies, varieties, forms and cultivars of plants belonging to the Echeveria elegans group 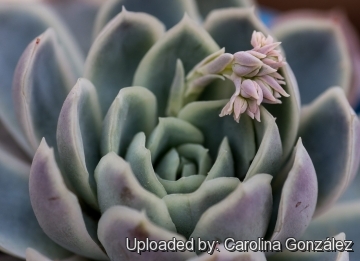 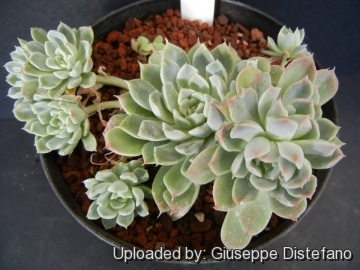 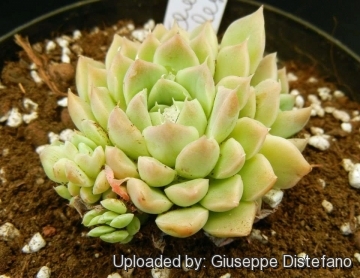 Echeveria elegans Photo by: Giuseppe Distefano
Send a photo of this plant.

Cultivation and Propagation: Echeveria elegans is certainly one of the most versatile neat, low-growing ground cover succulents. It is easy to care for and is a good starting point for beginning gardeners. Forms beautiful clumps.
Soil: It is essential in cultivation to use a very porous soil, with adequate drainage.
Exposition: Bright light is required to prevent "stretching" of Echeverias ("stretching" occurs when a moderately fast growing plant such as an Echeveria, is grown in dim light or over-fertilized, which causes overly lush growth that contributes to weak, pallid plants).
Watering: Water thoroughly when soil is dry to the touch, keep dryer in winter.
Hardiness: It thrives in subtropical climates. Protect from frost, in temperate regions it is grown under glass with heat. It is a bit more frost sensitive than most.
Uses: Echeveria elegans is cultivated as an ornamental plant for rock gardens planting, or as a potted plant. The low-growing clusters are very suitable to fill rock crevices and are occasionally used to cover the roof tiles of a house‐top. A layer of rosettes stapled to the roof overhang is used to hold an inch of peaty soil to the roof. It is also used to form silvery blue small borders and are believed to keep away evil spirits. Mature clusters of rosette cascading from containers provide sculptural forms of extreme elegance in the home and garden.
Propagation: Quite easy from seed or from cuttings, the latter either from individual leaves or from offset rosettes.