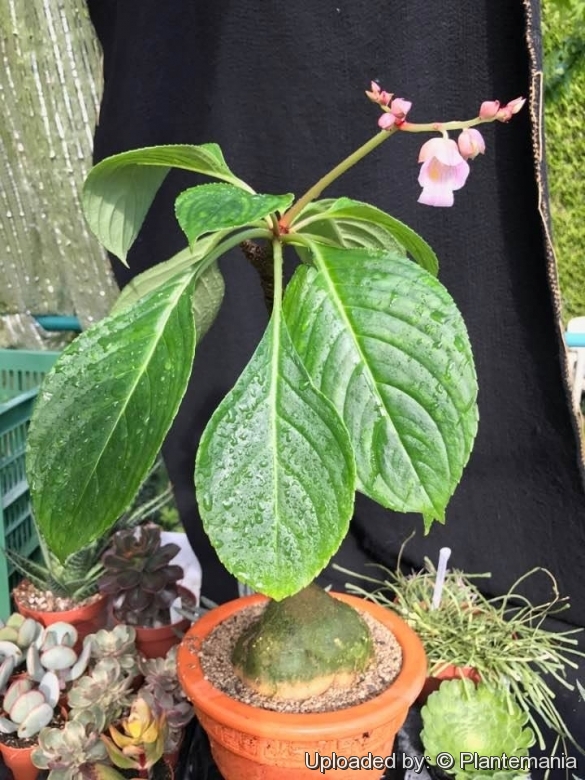 Origin and Habitat: Impatiens mirabilis is an extraordinary giant balsam found on limestone in Thailand (Surat Thani, Phangnga, Krabi, Phatthalung, Nakhon Si Thammarat, Satun and Trang provinces) and northern Malaysia (Langkawi and Perlis Islands), almost on the Equator. As far as is known, this species does not occur anywhere else. The extent of occurrence is less than 20,000 km² (18,000 km²). It is known from more than 10 locations (approximately 15 locations).
Altitude range: Between sea level and 400 m asl.
Habitat and Ecology: This tuberous species is found in lowland forest on karst limestone formations. The greatly swollen base of the stem, often wedged firmly into rock cracks, is very distinctive. Impatiens mirabilis grows along coastal cliffs in Thailand. Most Impatiens can't survive this harsh, rocky environment, but this one does thanks to its unusual caudex, which stores water and provides stability among the rocks. Here grow several other striking plants such as Cycas siamensis and Euphorbia antiquorum. Impatiens mirabilis currently is threatened by the collection of mature individuals for the ornamental illegal trade and sold at markets in Bangkok, and there is a continuing decline in the number of mature individuals. Mining of the karst limestone for cement production may also be a threat in some areas.

Description: The Gouty balsam, Impatiens mirabilis is a perennial stem succulent herb with a swollen stem-base (caudex) and a tree-like canopy with succulent leaves grouping at the apex and waxy. The caudex is hard and rock-like, and is easily mistaken in habitat for a boulder. Each plant takes on a unique shape - some have multiple stems, while others have a single stem, which widens at the base like an elephant's foot. It has curiously shaped succulent golden-yellow or creamy flowers that look almost like orchids and appear in summer and oval leaves arranged in terminal clusters. Pink ones also exist, but are much rarer. It grows to a height of 1.8 or more metres and has a similar spread.
Derivation of specific name. 'Mirabilis' means wonderful or amazing, and this plant is quite unlike other Impatiens species.
Stem: Massive, fleshy, pale green, later turning reddish- brown, erect, naked, 90-180(-300) cm high and with swollen stem-base (pachycaul) 45-60 cm in diameter, cylindrical and branched above.
Leaves: Thinly fleshy, somewhat ciliate and waxy, crowded at the ends of the branches, much narrowed to the base, obovate to ovate, crenate, length 12-30 cm, breadth 8-11 cm, (reportedly the largest of all Impatiens species), with a thick fleshy midrib and 13 or 14 pairs of faint pinnate nerves, both surfaces glabrescent. Petiole 2,5-3.5 cm long. The plant can drop some or all of its leaves if conditions get too cool or dry, but it can stay evergreen if conditions are right.
Inflorescences: Racemes axillary, as long as, or longer than the leaves, slender, and few-flowered.
Flowers: The flowers of Impatiens can be divided into two groups; the helmet type and the flat type. Impatiens mirabilis belongs to the helmet type. The flowers are cremy to golden-yellow, or a mix of red, white and yellow, dipper-shaped, inflated, fleshy, 4.5 cm long, sepals 3; the lateral elliptic-oblong, acute; the posterior widely hemispheric with a short incurved spur; anterior petal rotund, transversely oblong, the lateral petals united into a single 3-lobed piece.
Blooming season: Its exotic flowers appear mainly in summer, but in the right conditions, it may bloom throughout the year.
Note: There are over a 1000 different species of Impatiens spread around the globe, most of them are small flowering herbs, there are only about a dozen species known that have a caudex. Impatiens mirabilis is the most common of caudiciform Impatiens in cultivation. There is another species, Impatiens kerriae, which is very similar and often confused with Impatiens mirabilis. The main difference is that the kerriae has a single flower at the end of the flowering stem whereas the mirabilis has a number of flowers on one stem. 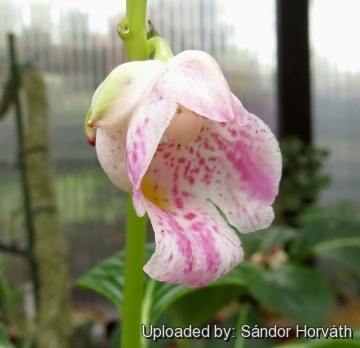 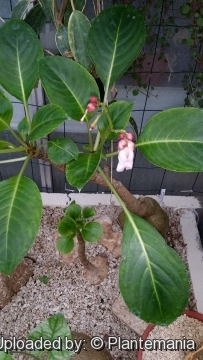 Cultivation and Propagation: Impatiens mirabilis is rare in cultivation and seldom seen for sale. It needs a warm and moist environments. Despite the fact that it grows in tropical conditions, it can take quite a bit of dryness and survive happily on a minimum of water. In the winter it will lose all its leaves and will start growing again in early spring. The flowers are produced in the summer, yellow being the more common colour. Pink ones also exist, but are much rarer. In the right conditions, it is an easy and long-lived plant.
Substratum: It requires very fast draining soil. The plants like a rich soil mix containg 2 parts coarse sand, 2 parts pumice rock, and 1 part potting soil or coir fiber. Mix in a small amount of dolomite lime, to simulate the plant's limestone habitat, but aren't usually too picky as to soil type.. It doesn't need a large pot, due to its small root system. In fact it does well as a bonsai plant.
Exposure: It does well in varying amounts of light, from bright shade to part sun. Shade is sometimes provided in hot climates.
Water requirements: It is fairly drought tolerant, but it grows best if the soil is kept slightly moist. Over about 50% humidity is preferred.
Fertilization: They are fertilized on a monthly basis with a balanced fertilizer during active growing phase.
Temperature requirements: Impatiens mirabilis is a tropical species that does best above 15°C. It seems to be happiest between about 21-32°C. However, in the winter, keeping it cool gives the plant a needed rest.
Propagation: By seeds that need warm (23°C) and moist humiferous substrate, germination in 4-5 weeks. If you want to catch the seed, make sure to put something around the seed pod or they will spring all over the place. The seed can be kept up to 3 months before sowing, but can lose viability quickly after that. Flowering from seed can take 3 to 4 years. Propagation by cuttings – although difficult – are also possible. Impatiens mirabilis is a freely seeding plant, almost weedy.