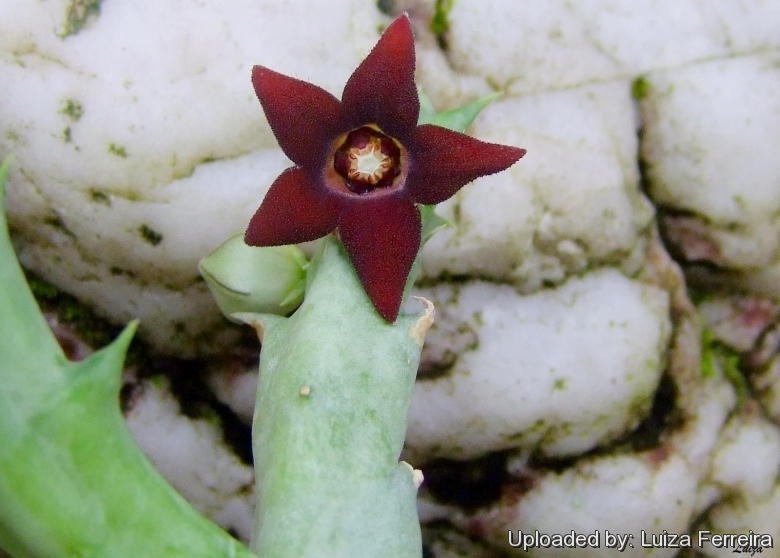 Origin and Habitat: Orbea decaisiceana is a very widely distributed species and is found in dry Sahel regions of Mauritania, Senegal, Mali, Burkina Faso, Niger, Sudan, and occurring through the Sahara ( NE Africa Algeria, Morocco) and southern Arabia.
Altitude range: From sea-level up to 2000 m altitude.
Habitat and ecology: Orbea decaisneana grows on desert margins in dry grasslands, among stones on slopes on granite and on limestone outcrops and is locally very common. In Senegal, it occurs in yellow to pale orange sand among fixed dunes mainly between one and three kilometres from the shore among the dense and spiny vegetation covering the dunes. In the south of Morocco, it grows along the coast up to 150 km inland. One locality was found in the Eastern Rif Mountains. It is poorly recorded and it is not known whether it is threatened by genetic erosion.

Subspecies, varieties, forms and cultivars of plants belonging to the Orbea decaisneana group 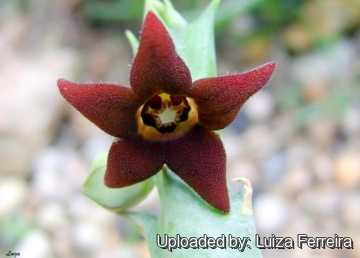 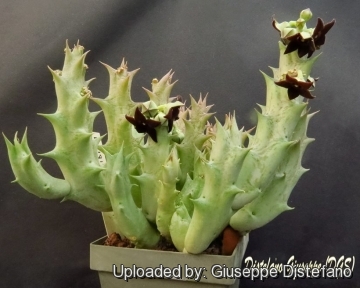 Cultivation and Propagation: Orbea decaisneana is a very unusual xerophytic plant adapted to dry soils and not difficult to growonly bearing in mind that this species benefits from slightly warmer winter than others. It is very suitable for a hanging pot.
Growth rate: It is a somewhat slow growing Stapeliad that will make large clumps given the best conditions. Most plants will offset readily, and clumps can be produced in a few years.
Soils: It likes very porous mineral cactus mix soil, pH 7,5 to 8,5 (mildly alkaline), but can become too elongated if compost is too rich.
Repotting: This plant needs plenty of space for its roots, repotting should be done every other year or when the it has outgrown its pot. Use pot with good drainage.
Watering: It needs regular watering, especially during the hottest summer days; provide also some light watering if the green house temperatures in winter are elevated. Either excessive or very scarce watering can induce rot.
Fertilization: Feed with a high potassium fertilizer in summer.
Frost Tolerance: For safe cultivation winter temperatures must be kept over 10° C, but it can withstand winter night-time temperatures down to about 5°(or less) Celsius for short period. Freezing temperatures are often fatal. In the rest period no high atmospheric humidity!!
Sun Exposure: Best for half-shade but grow well in full sun and full shade too. Tends to bronze in strong light, which encourages flowering, but is likely to suffer from sun scorch or stunted growth if over exposed to direct sunlight during the hottest part of the day in summer.
Diseases: Rot is only a minor problem with Orbea if the plants are watered and “aired” correctly. If they are not, fungicides won't help all that much.
Uses: It is an excellent plant for container growing. Cascading, clustering, great for a hanging display. Stems may possibly become purple and limp in winter, but revitalize in early spring. It always looks good and stays small. It look fine in a cold greenhouse and frame or outdoor in a rockery.
Traditional medicine: In Senegal it enters into a number of medico-magical treatments for mental troubles, epilepsy, and perhaps also for Parkinson’s disease. In Senegal the Wolof of Cayor and Cap-Vert apply the latex to a carious tooth to quell toothache. It will remain only of local importance as a medicinal plant as it is very toxic. Stock will not graze it as it is considered toxic to both man and animal. It is sometimes used as criminal poison. In Mali dried powdered stems are thrown in the water as fish poison; it is considered slow-acting.
Traditional uses: Orbea decaisneana has superstitious uses and is cultivated as fetish plant, and is probably planted at mosques, etc., to dispel evil influences.
Maintenance: The plants are relatively short lived, usually starting to die off from the middle outwards. So it is always an advantage to get cuttings from the parent plant to grow on.
Propagation: Seeds and cuttings. Cuttings will root only in hot weather. Cuttings must be kept very dry to root. Seeds germinate readily if they are sown when fresh.