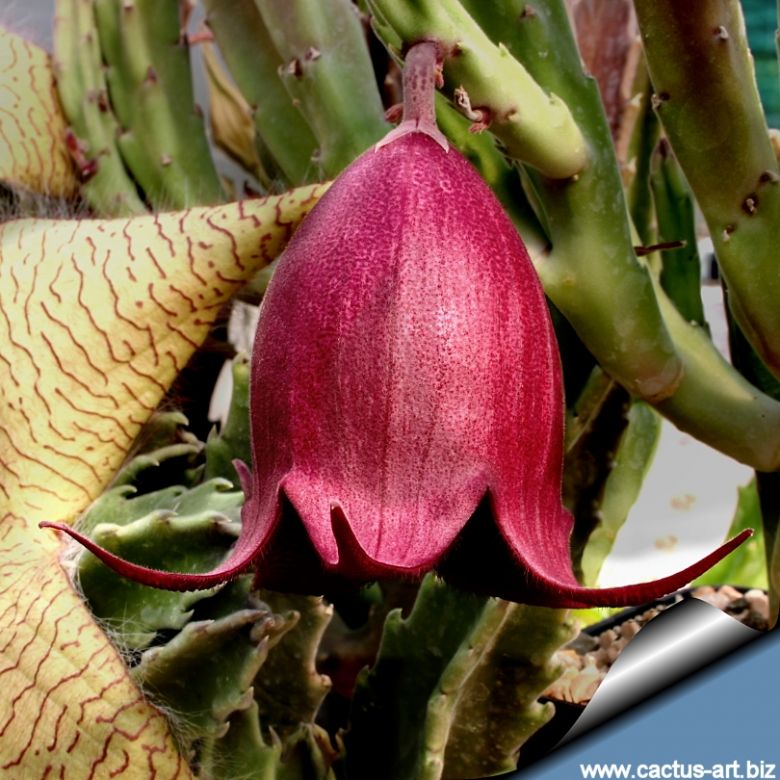 Description: Stapelia leendertziae is a tufted creeping or procumbent plant that trail and hang down over the pot. In the ground it forms dense carpets or cushion up to 1 metre (or more) in diameter.
Stems: Erect, pale green or reddish and slightly furrowed. Stems are quadrangular, a factor which allows expansion and contraction to compensate without harm for any excess or shortness of fluids inside; hence they may appear flat- or sunken-sided according to the availability of water. This is the "succulence" and a storehouse for nutrients, which are crucial to their survival in harsh, xeric habitats.
Flowers: Deep cup-shaped / campanulate or more open in a star, dimension about 8cm in diameter and 7 or 8cm long in late summer. They are purple-brown and the interiors is blackish purple or dark maroon which absorbs light so no detail can be seen; inside the cup is rugose, densely velvety, even short-hairy. Foul-smelling.

Subspecies, varieties, forms and cultivars of plants belonging to the Stapelia leendertziae group 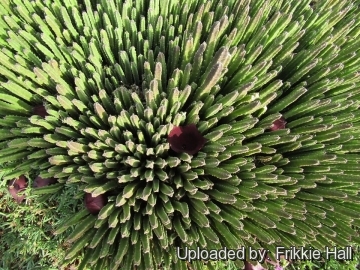 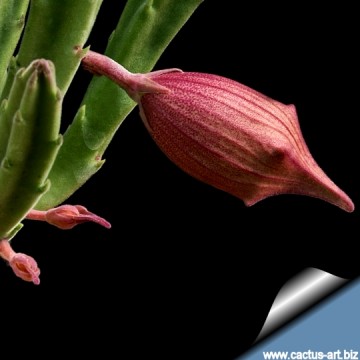 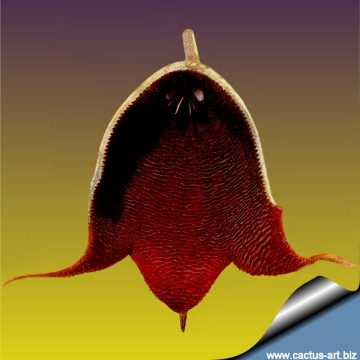 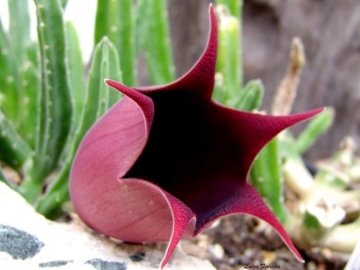 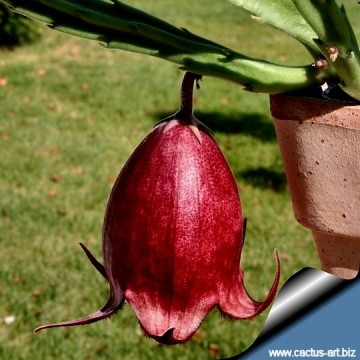 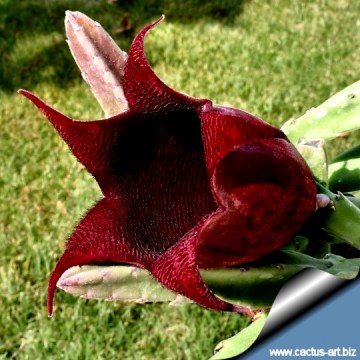 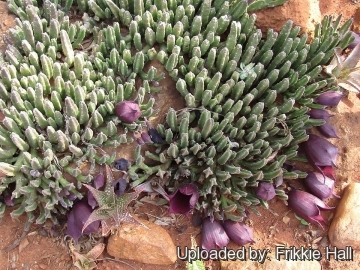 Cultivation and Propagation: Spring: When winter ends and they begin to grow again, they will require much more water and soaking the pots will no longer put the plants at risk for rot. In the spring they will grow well in partial shade and leaving them out in the rain may provide them with the water they need.
Summer: In the summer months they will tolerate heavy rain, but will be just as happy if the season is dry. It's best to sort out the stems while the plants are resting in the summer before they begin their autumnal growth cycle. They will tolerate very hot weather outdoors as long as they are kept in filtered light and this will encourage them to flower in the Autumn. They also enjoy some fertiliser. Moving the plants as they are developing buds may cause them to spontaneously abort the flowers all together.
Autumn: In the fall keep them outdoors until the night time temperatures drop below the 5°C.

Winter: Winter care presents no problems at 5°-10° C with plenty of light. As soon as they are flowered be sure to take extra precautions to keep them dry, because damp cool conditions when the plants are resting is an invitation to fungal infections, but - according to temperatures –some occasional lit watering may be useful.
Propagation: Easiest with stem cuttings. Allow cuttings to dry a day before planting. Stems must be laid (Not buried) on gritty compost and will then root from the underside of the stems. It can also be increased from seeds sowing in spring in moist, sandy peat moss. Barely cover seeds. Seeds germinate quickly.
In any season it's best to lay the stems out for several days before replanting them and then pot them only in dry soil and with hold any water until they begin to shrivel or start growing again.
Potting medium: Since roots are quite shallow, use a cactus mix or add extra perlite or pumice to regular soil potting soil. A gritty, very free-draining compost is suitable, and clay pots help the plants to dry out between watering. Re-pot every 2 years.
Pest and diseases: Stapelia are generally fairly easy to grow, especially if kept pest-free. They are very susceptible to stem and root mealy bugs, and damage from these may well initiate fungal attack. Any time when there is a dead or dying stem in the pot it is important to remove it immediately and completely before other healthy stems can become ill too, isolate the healthy parts, dry them off, and re-root them in new compost.