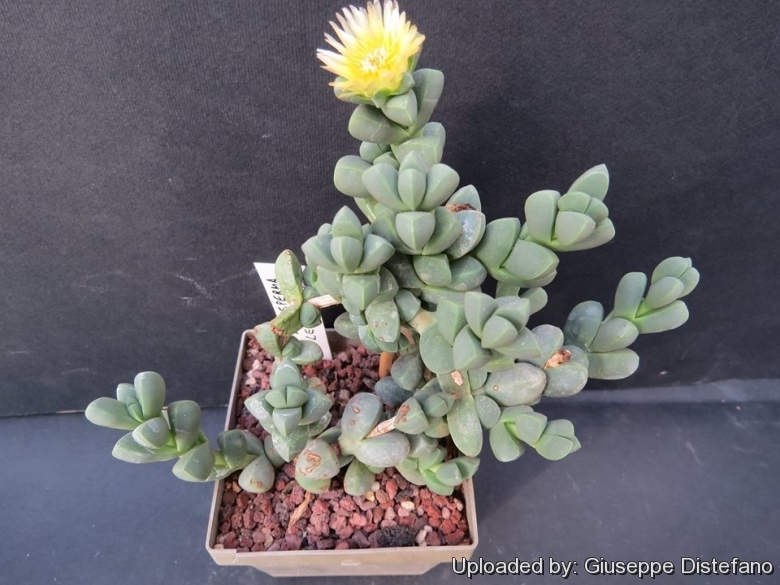 Origin and Habitat: Coega to Port Elizabeth, Eastern Cape, South Africa. Extent of occurrence 70 km²
Habitat and Ecology: Corpuscularia lehmannii grows on quartzite outcrops in karroid vegetation, also in crevices of rocks. The species is threatened by invasive alien species, habitat loss, pollution and habitat degradation. Of the six locations known through herbarium records four are now locally extinct due to urban expansion of Port Elizabeth. Two remaining subpopulations are severely fragmented and continue to decline due to ongoing habitat loss. At one of the remaining locations near Coega the most part of this species' habitat has been lost to mining.

Description: Corpuscularia lehmannii is a popular, compact, succulent plant with grey, fat but angular leaves, should give quite showy yellow-translucent flowers without too much of a struggle. C. lehmannii is larger than Corpuscularia taylori, which, however, flowers much more prolifically.
Habit: It is a densely leafy perennial plant forming cushion with a tap-root and some additional adventitious roots on sprawling, prostrate stems. All parts hairless.
Stems: It has two kinds of shoots: long, ascending flower-bearing shoots with visible internodes and later numerous decumbent short shoots.
Leaves: Two-edged, 3-angled. Leaves on long shoots to 4 cm long (mostly 20-25 mm long) and 8-10 mm broad and distant, keel oblique at first, tapping evenly towards the acute apex from above, more abruptly so from the side, each leaf with a developed 2-leaved short shoot in its axil, glaucous, not papillose. On short shoots the leaves are ovate to almost globose and nearly imbricate, 12-16 mm long, 6-8 mm broad and thick.
Flowers: c. 4 cm in diameter in a stalked, several-flowered cyme. Sepals 6. Petals white to straw-coloured translucent, decreasing in length to the centre.
Fruits (capsules): 6-8 chambered.
Seeds: 0.9-1 mm long, 0.6-0.75 mm broad. 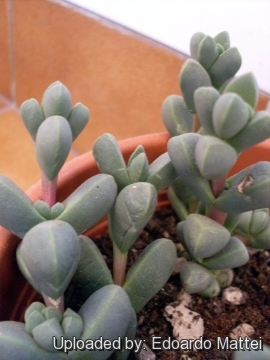 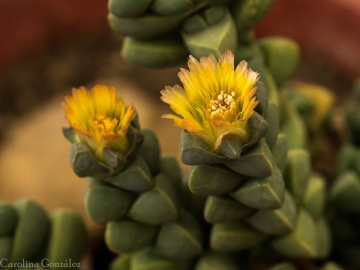 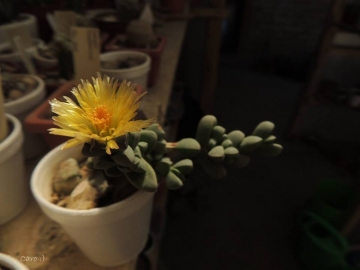 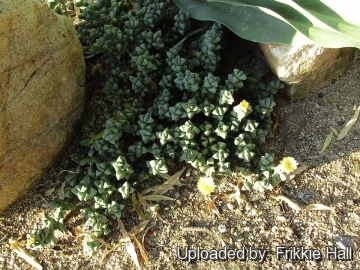 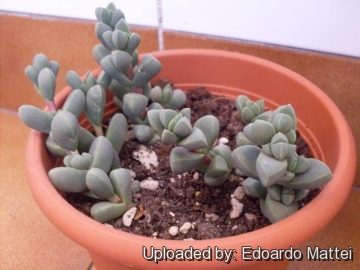 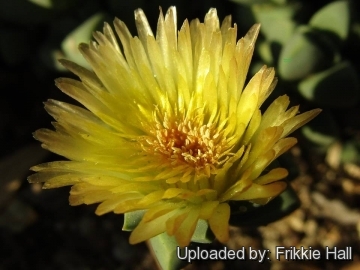 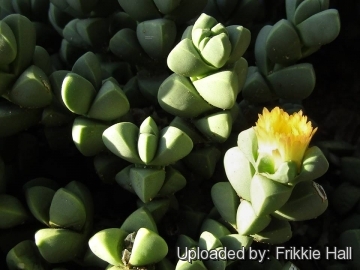 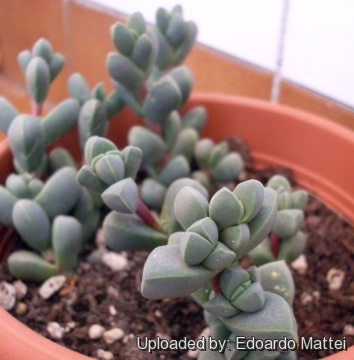 Cultivation and Propagation: Corpuscularia lehmannii is not one of the widely grown mesembs, but it flowers all summer and autums, and it can endure temperatures down to about -4° or -5°C without problems. It can make a nice low succulent cushion in the garden, does well in containers, window-gardens and hanging-baskets and makes a good houseplant. It is not difficult to cultivate. It thrives best with bright light and ample airflow.
Growth rate: Moderately fast.
Soil: It grows best in sandy-gritty soil. Good drainage is very important as it is prone to root rot.
Fertilization: Feed it once or twice during the growing season with a fertilizer specifically formulated for cactus and succulents (poor in nitrogen), including all micro nutrients and trace elements diluted to ½ the strength recommended on the label.
Watering Needs: It is a dry-tolerant plant. Water regularly in the growing season, but avoid water-logging and let dry between waterings. Water with caution in winter, as the plant can lose its roots if the soil stays cold and wet for extended periods. If grown in a container, bottom watering by immersing the container is recommended. It must have very dry atmosphere.
Sun Exposure: Does well in full sun, but can handle some shade, too. In shade the leaves colour will remain more green, while in harsh full sun conditions the foliage can develop a greey-blue tinge. In summer keep cool and provide some shelter from direct sun during the hottest hours. It can be sunburned if moved from shade/greenhouse into full sun too quickly. It tends to get really leggy in deep shade).
Frost Tolerance: Protect from frost to prevent scarring. It requires a minimum temperature of about 5°C, but will take a light frost and is hardy down to -5° C for short periods if it is in dry soil (Lethal temperature in habitat -6 to -10 ° Celsius). USDA zones 9A – 11. In areas prone to frost, grow in an intermediate greenhouse or conservatory, in pots.
Uses: They make wonderful rocker plants in hot, dry areas and also grow well in containers or sunny patios or in a hot corner next to a swimming pool.
Pests and diseases: May be susceptible to mealybugs and rarely scale. Protect from cold.
Propagation: It is readily grown from seeds but it is easily increased by cuttings too. Cuttings root easily. It is also possible, to plant the leaves in good, sandy soil where they will take root - members of this family often propagate vegetatively in this way.