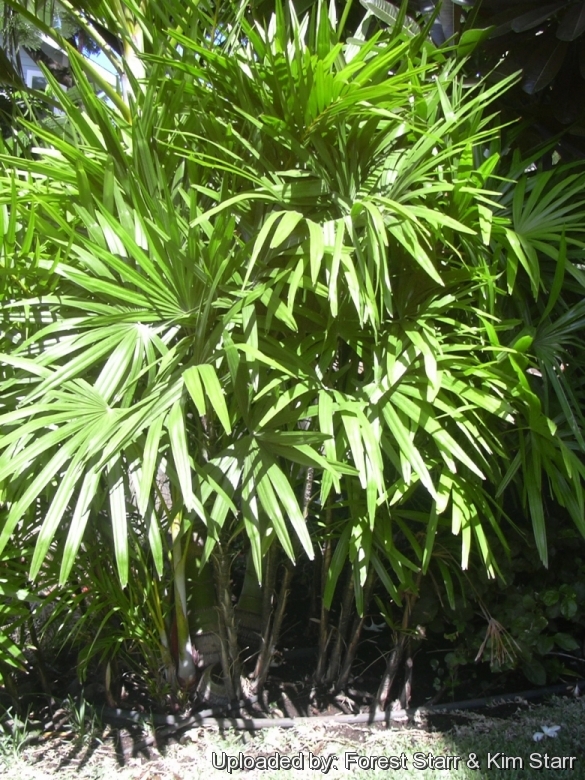 Origin and Habitat: Rhapis excelsa is probably native to southern China and Taiwan. It is not known in the wild; all known plants come from cultivated groups in China.
Habitat: It is an understorey plant.

Description: Rhapis excelsa is a suckering, thicket forming fan palm, that eventually becomes very dense, forming 4 x 4 m-wide-clumps, though easily kept smaller.
Trunk: Multiple, suckering freely at base from underground rhyzomes, slim, cane-like, stright, 2-4 m high, 1-3 cm in diameter. The upper part of the cane near the crown is covered by fibrous sheath which remains attached to the base of the leaves. As the plants age, the sheaths fall, revealing a dark green, conspicuously ringed bamboo-like stem of leaf base scars. In Rhapis excelsa this leaf sheath fibre tends to be loose and rather ragged looking. Individual canes can be closely ringed, or rings may be moderately spaced, depending on growing conditions.
Leaves: Glossy green, palmate, thick textured 20-50(-80) centimetres across, arranged in a semi-circle just greater than 180°, divided into regular fairly broad, ribbed segments. Leaf segments are single or few in young plants and increase to 5-12 or more in mature plants; segments are (usually) divided to the petiole, conspicuously ribbed and outer and inner segment margins are minutely toothed. Leaf-ends are saw-toothed unlike most other palms. Petioles 20 to 60 cm in length covered with fine grey or brownish hairs. The leaf sheath may be up to 60 centimetres long, the edges of which are composed of brown or grey brown fibres.
Inflorescence: This is usually a dioecious palm species (with separate male and female plants available) but hermaphroditic individuals are not so rare. Inflorescences emerge from between the leaf sheath and stem and stretch at the top of the plant. The immature inflorescence has a pale pinkish tinge and is enclosed in pale green tubular bracts. As the inflorescence develops the bracts dry up and become brown and papery in texture. The flowers containing three petals fused at the base are fleshy and spirally-arranged, on the second and third order branchlets.
Fruit: Ripe fruit are fleshy and white to cream, rounded and approximately 36 mm across.
Remarks: There are many slow growing, compact varieties of this species, some of which are extremely rare and priced, and the variegated varieties tend to be even slower growing and very expensive. These palms in china are often dwarfed to as little as 25 cm by confining the roots in small bonsai pots and pulling the sheaths as they appear.

Notes: The names Chamaerops excelsus and Trachycarpus excelsus have occasionally been misapplied to Trachycarpus fortunei. This is correctly a synonym of Rhapis excelsa. 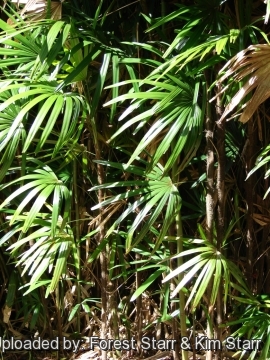 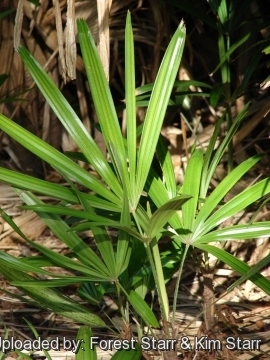 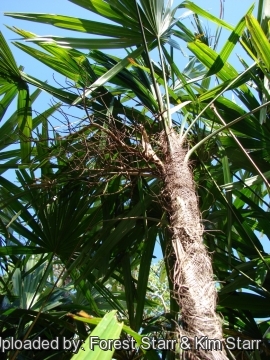 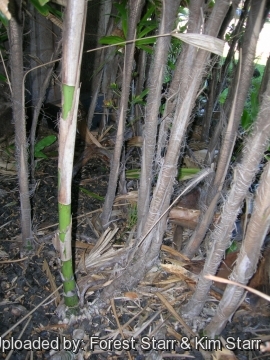 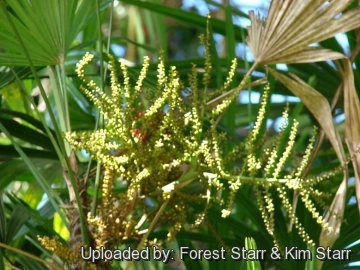 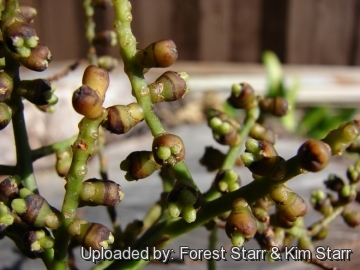 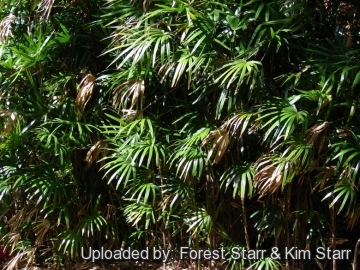 Cultivation and Propagation: This palm is an excellent garden plant adapt to different tropical climates. It is a hardy, easy to grow palm that practically thrives on neglect in the tropics. It is also one of the most elegant indoor palms. Not many palms excel as indoor palms as Rhapis species. These palms seem to get greener and greener the more darkness they live in.
Soil requirements: It is very adaptable to soil types although neutral to slightly acid soils with good drainage and organic matter is recommended for best results. Avoid soils that are constantly soggy.
Watering: Though drought and heat tolerant, it benefits from regular watering, especially during the dry seasons and should be watered before the soil completely dries. Don't let sit in water. Indoor, potted Rhapis should not be over-watered. They may contract the fungus Phytophthora, if over-watered. The better the quality of water applied the better your plants will grow in the long run, particularly plants grown in containers. Plants held indoors benefit by being taken outside when it is raining or being placed under a sprinkler for a period of time.
Light: Outside they grow best in half sun but tolerating direct sun as long as soils are good and adequate water is available. Young specimens need protection from direct sunlight and grow best in shady to partly shady locations so for best results a partially shaded spot under trees or a pergola is ideal. With some sun the leaf crowns become larger and the stems attain greater diameters. However, it can grow in various light conditions, from bright light or full sun to full shade, or part sun/part shade. If home-grown, they look their best in bright diffuse light.
Fertilization: Need a perfect low-release fertilizer (e.g., 18-18-18) diet including all micro nutrients and trace elements. It is subject to magnesium and potassium deficiency
Hardiness: Rhapis excelsa grow well in tropical and subtropical climates, however it tolerates temperatures as low as -5° C and it is quite cold hardy, particularly when grown under shelter, and it also grows in climates where it may be exposed to prolonged periods of cold weather. For safe cultivation normal temperatures should not go below 5°. (USDA hardiness zones: 10B through 11) Where not hardy, grow as an indoor palm in containers.
Wind tolerance: Keep out of high, drying and cold winds, needs high atmospheric humidity.
Salt aerosol tolerance: It must be protected from salt.
Maintenance: Remove dried fronds. Trim off or remove some small basal shoots if there are one too many, especially if container-grown to reduce congestion and improve aeration. You can then use these suckers to propagate as new plants.
Garden uses: Looking elegant and stately in its clumping habit, it will be excellent for landscaping. It is grown in open air, in the sub tropical and warm-temperate zones, for the decoration of parks, malls, parking lots and gardens. It is also grown en masse, along sidewalks, road dividers, highways and byways. Because of its reduced size and its elegant look, the Rhapis excelsa proves to be particularly suitable for its utilization in patios and in great open inner courts. It can be container-grown if garden space is unavailable and has a fairly good employment, in pot, for indoor decoration. Its low light and humidity requirements make it a common feature in malls and offices. As an indoor plant Rhapis excelsa has no palm rival. (Not even Howea forsteriana). Its ability to handle low light intensities, low humidity, varying temperatures plus its suitability to pot culture, small to moderate size and slow growth rate make this palm ideal for indoor culture.
Other uses: The stems are used as chopsticks and waking stikcks.
Disease & Pests: Protect against spider mites, scale insects and mealybug. Brown or black fungal spot is usually caused by poor cultural practices and too crowd plants much so as to allow unimpeded air flow to reduce conditions ideal for the fungus. They may require regular fertilization to prevent yellowing caused by potassium deficiencies; Brown leaf tips are often caused by an excessive accumulation of fertiliser salts in the potting mix. Protect from frost.
Propagation: By seeds, though Rhapis excelsa more readily propagates via underground rhizome offshoots.