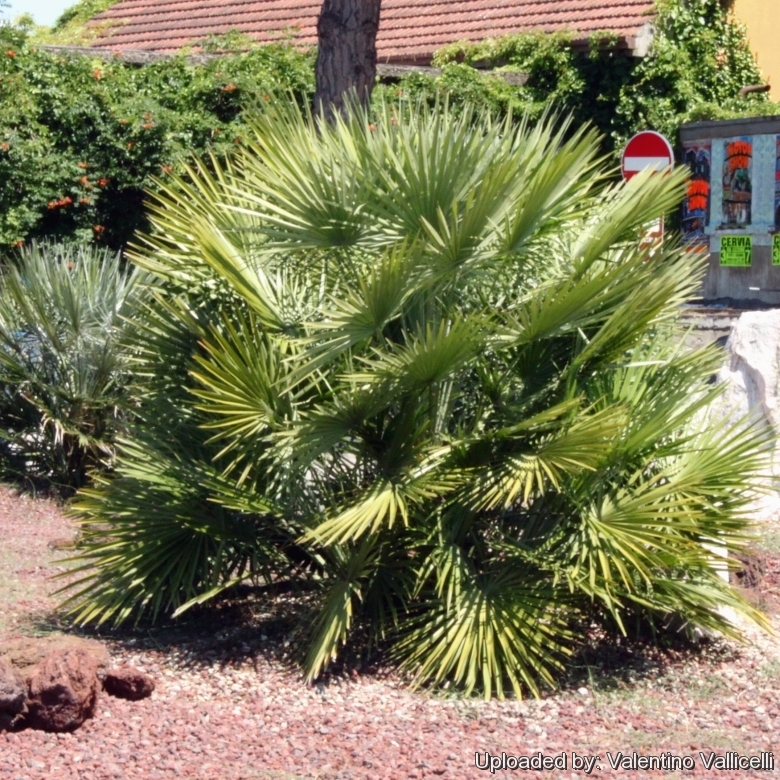 Origin and Habitat: Chamaerops humilis is the only palm species native to Europe. (Spain, Portugal, France, Italy and Malta) and northwest Africa (Morocco, Algeria, Tunisia) and eastward to Turkey. It is the northernmost naturally occurring palm in the world.
Habitat: It grows in hot exposed dry cliff-sides of hills and mountains of the Mediterranean Sea basin. It even survives the occasional snowfall in its native habitat.
Ecology: It flowers in April–May and is pollinated by a specific weevil, Derelomus chamaeropsis.

Description: It is a shrub-like clumping palm, with several stems growing from a single base than can grow up to 4.5 m in height. It has become very popular in recent years, mostly due to its cold hardiness. Not only can it resist easily temperatures below-6° C but it is fairly fast growing and drought resistant too. It is a very variable species both in leaves-colour and in shape. Some plants form suckers more freely than others, other stay almost single (Chamaerops humilis var. elatior). Other are very dwarf growing not exceeding 1.5 m in height.
Stems (trunks): 2-5 m tall, 20–25 cm. in diameter terminating in dense clusters of fronds around the apex.
Leaves: With a 90-120 cm long petiole with numerous sharp needle-like spines terminating in a triangular more or less rounded fan about 50-60 cm and 60 sm wide, deeply divided into 10 to 20 multiple sharp leaflets that are themselves split at the tip each up to 50 cm long.
Flowers: Borne in spring in dense, short inflorescences at the top of the stems held close to the trunk are hidden behind the leaf stems which are armed with very sharp teeth; it is usually (but not invariably) dioecious with male and female flowers on separate plants.
Remarks: It is closely related to the genus Trachycarpus from Asia, differing in clumping habit (Trachycarpus only forms single stems without basal suckers)
Fruit:Dark yellow, orange or brown, and about 1 cm in diameter in the autum.

Subspecies, varieties, forms and cultivars of plants belonging to the Chamaerops humilis group 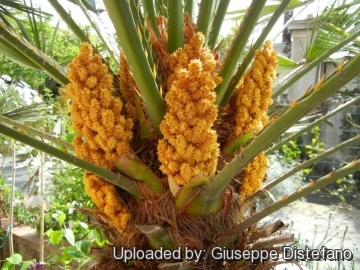 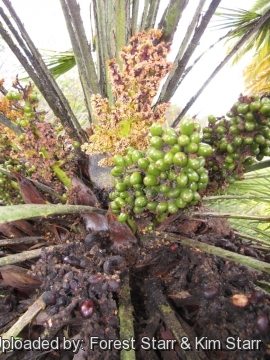 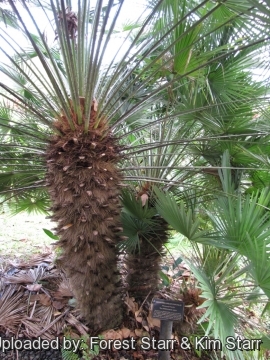 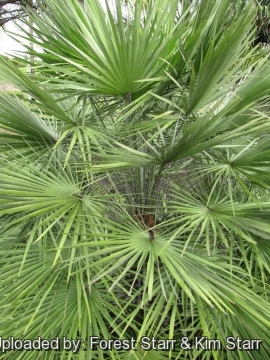 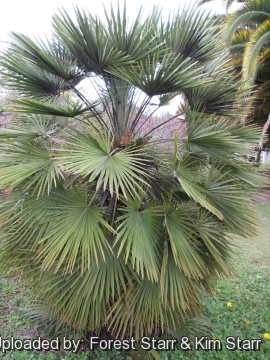 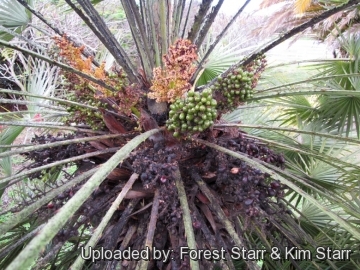 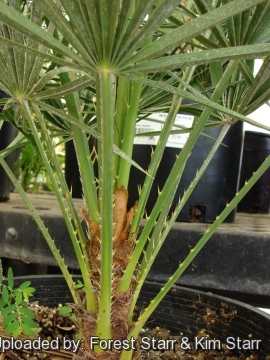 Cultivation and Propagation: It is cultivated in tropical, subtropical and temperate regions and planted in gardens and parks. It is adapted to a Mediterranean climate with cool, moist winters and summer drought, and can grow on poor and rocky soils. If you needs a small low maintenance, but graceful looking palm, it doesn't get any better than Chamaerops humilis. It's usually seen in clumps and tolerating neglects.
Soil: It is very adaptable to many kinds of well drained soils.
Fertilization: Need a perfect fertilizer diet including all micro nutrients and trace elements or slow release fertilizer applied during the growing season, or according to package directions, using a fertilizer specifically formulated for palms.
Water Requirements: It tolerates low levels of humidity and summer drought, though it prefers evenly moist but not consistently wet medium. When supplied with adequate moisture and fertilizer it is also fairly fast growing. This palm is very drought tolerant once established. It dislikes soggy soils.
Light: It prefers bright sunny locations, but it also does well in part shade with some direct sunlight. It will survive in rather heavy shade but "stretches" to lose its compact shape. It produces flowers and fruit only in sunny positions.
Aerosol salt tolerance: It is somewhat salt resistant and may be grown near the sea if given some protection (behind a dune, building, etc. )
Wind resistance: It endures drying winds.
Hardiness: These palms are some of the hardier palms, tolerating winter frosts down to about −12°C for short periods ( USDA Zones 8-10)
Roots: Usually not a problem.
Maintenance: For the healthiest and most attractive plant, keep the palm pruned. As the old fronds die, these should be trimmed off and the leaf bases allowed to dry out, but do not prune if the frond still has some green colour. Palms recycle nutrients from dead or dying fronds and use them for healthier fronds. These days it is popular to remove all but a few of the suckers and to prune the leaves to form a cluster of clear trunked "mini" palms.
Uses: It is used massively in gardening and landscaping in many parts of the world though in sheltered areas it will survive prolonged periods below freezing point. It is also excellent in containers and urns. And thanks to its drought resistance and durability to heat it can thrive in harsh urban conditions.
Propagation: By seed, it can also be propagated by dividing clumps or removing suckers