Origin and Habitat: Tacinga inamoena is is widespread throughout eastern Brazil: it occurs from the middle drainage of the Rio Jequitinhonha (Minas Gerais) northwards to northernmost Maranhão and Tocantins, and westwards on sandstone outcrops in the cerrado of western Bahia. It is one of the most common cacti in the region.
Altitude range: 0 and 1550 metres above sea level.
Habitat and Ecology: Tacinga inamoena is usually found on rocks (including inselbergs) or very stony ground on nearly every type of substrate on outcrops of a range of rock types: gneiss, granite, quartzite, sandstone, and limestone, both in open caatinga and campo rupestre or sometimes in sheltered situations and forming dense, extensive thickets. It also occurs in high-altitude areas in rock outcrops or in sandy soils and includes disjunct populations growing on sandstone rock outcrops in the cerrado vegetation of western Bahía and in areas transitional between the semiarid caatinga vegetation and the humid Atlantic Forest vegetation of eastern Bahía. This plant tolerates some disturbance. Mining and deforestation of the caatinga for agriculture, including crops and livestock holding, are minor threats for Tacinga inamoena. Although abundant and mostly spineless, is avoided by all kinds of grazing animals, even when the country is devoid of other suitable forage. Its population is currently stable despite the existence of local threats.
For the most part, the distribution of T. inamoena saxatilis does not overlap that of Tacinga saxatilis, but there are places where they grow together, sometimes hybridizing.

Description: Tacinga inamoena is a shrubby, much branched, plant, often prostrate and spreading over the earth like a harrowing matweed, to 50 cm high and 3.5 m wide. The flowers are the most showy of the genus. Large and shiny, they almost look like they're made of wax. The stamens are erect and form a column surrounding the stigma. This species displays considerable morphological variability among its populations.
Stem segments (cladodes): Grey-green or bluish, green when young, round to obovate or oblong, with slight protuberances on the surface, flattened, 8-16 cm long, to 9 cm wide, usually quite thick, sometimes 3.5 cm thick.
Roots: Fibrous.
Areoles: Small, grey to yellow, when young filled with minute yellowish-brown glochids. Glochids unequal, spreading, usually wanting on old joints.
Leaves: Minute, 2 mm long.
Spines: Usually none, but rarely the plant develops 1-2 greyish white, acicular spines up to 3 cm long on some joints
Flowers: Opening during the day, small, brick-red or orange, opening widely, to 5.5 cm long and 4 cm in diameter. Petals spreading. The stamens are touch-insensitive, erect, unlike those of Opuntia, whose the stamens are spreading and always sensitive and form a column surrounding the stigma. Filaments orange. Occasionally buds are crested. Style yellow; stigma-lobes pale green;
Fruits (berry): Globular to slightly oblong, dark green or dark-brown, becoming yellow-orangish during maturation, 2.5-4.1 cm in diameter, presenting small clusters of glochids distributed on its surface. Each fruit is about 10-14 grams in weight, and the its edible portion, pulp and fleshy pericarp, corresponds to 62, 8% of the total fruit weight. The seeded pulp is yellow-orangish in colour and get stronger as maturation advances, and contains small and numerous crispy and brown seeds.
Chromosome number: 2n = 44

Subspecies, varieties, forms and cultivars of plants belonging to the Tacinga inamoena group 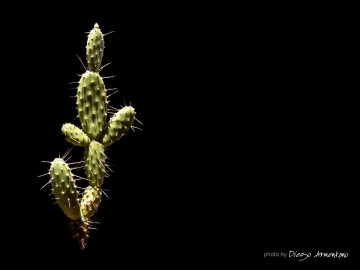 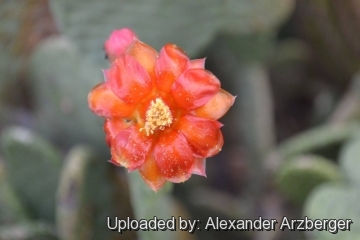 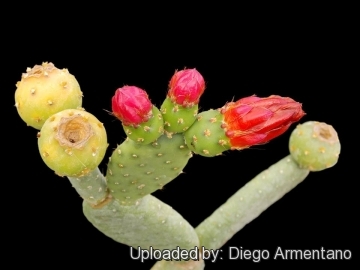 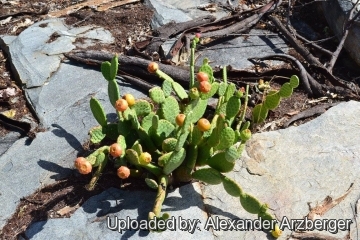 Cultivation and Propagation: Tacinga inamoena is a species of easy culture, recommended for any collection that needs lots of light with ample airflow. If grown correctly, it will reward the grower with generous displays of flowers.
Soil: Use a very porous mineral-based potting mix, with excellent drainage, as can be achieved by the addition of extra perlite or pumice.
Watering: Water regularly in summer, but do not overwater. Water thoroughly only if soil is dry to the touch, let soil dry in between to prevent root rot, keep dry in winter. Care must be taken with watering as they tends to become swollen and untidy in growth habit if given too much water and shade.
Fertilization: Feed with a high potassium fertilizer in summer.
Sun Exposure: High levels of light are needed to flower. Can be sunburned if moved from shade/greenhouse into full sun too quickly. During the spring it may be able to take full sun until the heat arrives at the end of spring. In an area that has hot afternoon sun, it may be able to take full morning sun, but requires afternoon shade or afternoon light shade.
Hardiness: Keep it around 5° C in winter, it is not frost resistant. A resting period in winter and strong light are necessary so that it can flower properly.
Pest & diseases: Sensitive to red spider mite. Overhead watering is helpful in controlling mites.
Traditional uses: Fruit of this plant has been used as an alternative food source in the semi-arid Northeastern region of Brazil. In Brazil, cave paintings more than twelve thousand years old appear to depict plants of Tacinga inamoena. The fruit is appropriate for consumption in natura and shows industrial potential.
Propagation: Herbaceous stem cuttings (Allow cut surface to callus over before planting).