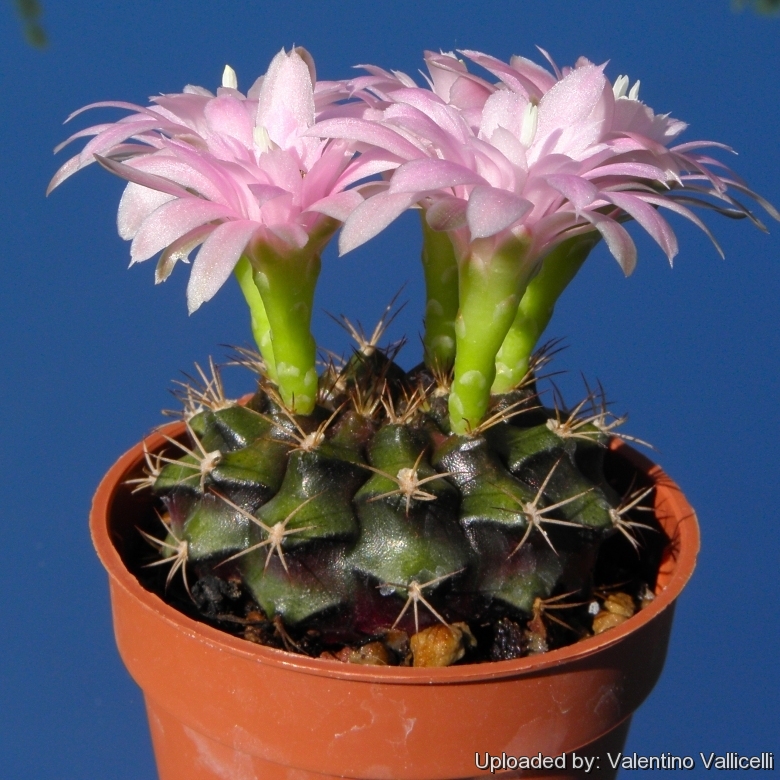 Origin and Habitat: Gymnocalycium anisitsii has a fragmented population spread over a large area in Brazil, Bolivia, Paraguay (extent of occurrence = 25,000 km2).
Altitude: It occurs at elevations of 70-400(-1000?) metres above sea level.
Habitat: It grows in open areas in semi-shade under the protection of low xerophyllous bushes that have no or very few leaves and rarely occurs on rocks in hills and in sandy mountain regions. The light filters through. The soil is usually a rich sandy loam. Rains are frequent during the summer. It often form large groups and is extremely variable. There are no known major threats to this species.

Description: Gymnocalycium anisitsii is a very easy to grow and very free-flowering cactus, it may be solitary or freely offsetting with white flowers (but also pink). Spines 5 to 7, tortuous, up to 6 cm long. It is a very polymorphic species with a large range of variability. Two subspecies are recognized, the nominate form and subsp. multiproliferum.
Stem: Spherical-depressed to short cylindrical, 5-8(-10) cm tall, 8-10 cm in diameter, green, pale-green bronzing in full sun, and highly decorative, often with horizontal clear and dark strips.
Ribs: 8-11, acute, and more or less notched into chin-shape protrusions or warts.
Radial spines: 5-7 (rarely to 9), straight or slightly tortuous, 1-6 cm long, subulate, somewhat angled, nearly useless in terms of defence. Young spine are pastel-white, yellowish or brownish with a darker tip, later becoming pale-grey.
Central spines: Usually absent, sometimes one.
Flowers: From the centre, funnel form, typically greenish white, but also pale pink or bright vivid pink and showy, about4- 6 cm long. Scales and outer perianth-segments broad, greenish margins, internal tepals white, broadly oblong, acute or greenish spreading. Tube thin.
Blooming season: It produces flowers almost continuously during the year.
Fruits: Oblong, 2,5 cm long, 6-10 mm in diameter, reddish at maturity.
Seeds: Almost spherical, 1 mm, pale brown, hilum inconspicuous.
Remarks: Seems to be a pretty variable plant you might get some other names which are effectively the same plant.... and also not sure all plants identified as this are really this.

Subspecies, varieties, forms and cultivars of plants belonging to the Gymnocalycium anisitsii group

Gymnocalycium anisitsii is a very polymorphic species with a large range of variability. Two subspecies are recognized, the nominate form and subsp. multiproliferum. There seems to be very little justification for vars. centrispinum, rotundulum, torulosum and tucavocense. Gymnocalycium griseopallidum from the salt-pan desert area on the Bolivia-Paraguay borders may well be another variety or local form which has become adapted to the peculiar local conditions of that region. 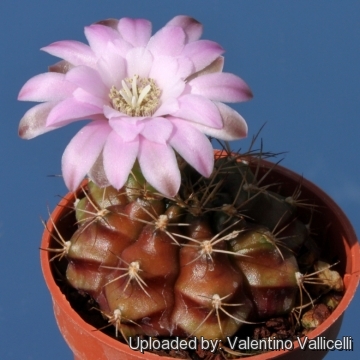 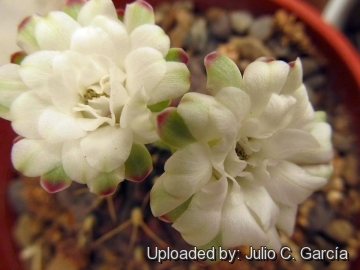 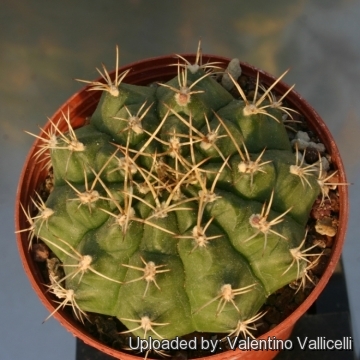 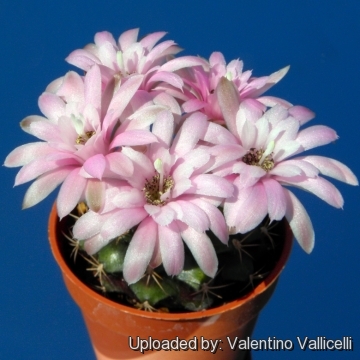 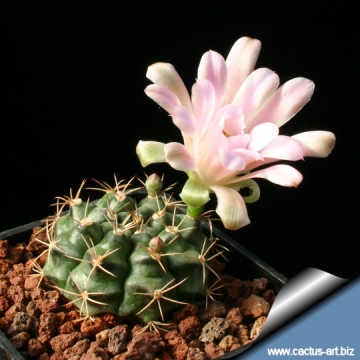 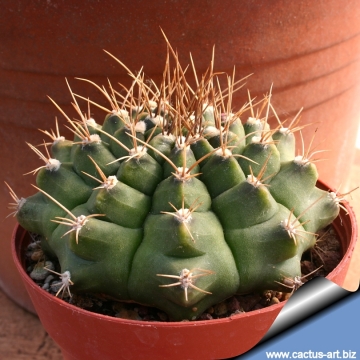 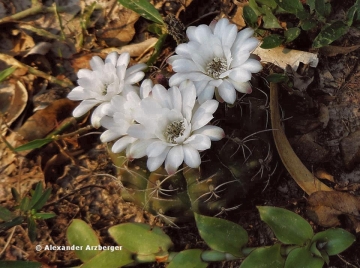 Habit at the type locality. Photo by: Alexander Arzberger 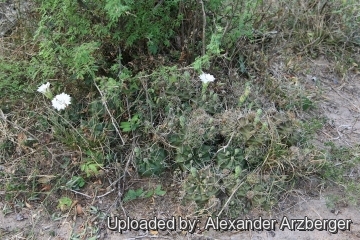 In habitat. Photo by: Alexander Arzberger

Cultivation and Propagation: Gymnocalycium anisitsii is a summer grower species that is easy to cultivate.
Growth rate: It is a relatively rapidly growing and easily flowering species that will make clumps given the best conditions.
Soils: It likes very porous standard cactus mix soil. Prefer a low pH compost, avoid substrata rich in limestone; otherwise growth will stop altogether.
Repotting: This plant needs plenty of space for its roots, repotting should be done every other year or when the it has outgrown its pot. Use pot with good drainage.
Watering: Needs moderate to copious waterings in summer, but do not overwater (Rot prone), keep dry in winter at a minimum temperature of 0°C.
Fertilization: Feed with a high potassium fertilizer in summer.
Hardiness: Reputedly resistant to frost if kept on the dry side prior to, and during, cold weather (hardy to -5 C ° C, or less for short periods).
Exposition: The plant tolerates extremely bright situations but enjoys filtered sunlight or afternoon shade, inside it needs bright light, and some direct sun. Tends to bronze in strong light, which encourages flowering and heavy spine production, but is likely to suffer from sun scorch or stunted growth if over exposed to direct sunlight during the hottest part of the day in summer.
Uses: It is an excellent plant for container growing. It always looks good and stays small. It look fine in a cold greenhouse and frame or outdoor in a rockery.
Pests & diseases: It may be attractive to a variety of insects, but plants in good condition should be nearly pest-free, particularly if they are grown in a mineral potting-mix, with good exposure and ventilation. Nonetheless, there are several pests to watch for:
- Red spiders: Red spiders may be effectively rubbed up by watering the plants from above.
- Mealy bugs: Mealy bugs occasionally develop aerial into the new growth among the wool with disfiguring results, but the worst types develop underground on the roots and are invisible except by their effects.
- Scales: Scales are rarely a problem.
- Rot: This species is particularly easy and accommodating, seldom suffer of cryptogamic diseases. Rot it is only a minor problem with gymnocalyciums if the plants are watered and “aired” correctly. If they are not, fungicides won't help all that much.
Propagation: Division, direct sow after last frost. Seeds germinate in 7-14 days at 21-27° C in spring, remove gradually the glass cover as soon the plants will be well rooted (ca 1-2 weeks) and keep ventilated, no full sun for young plants! To make a cutting twist off a branch and permit it to dry out a couple of weeks, lay it on the soil and insert the stem end partially into the soil. Try to keep the cutting somewhat upright so that the roots are able to grow downward.