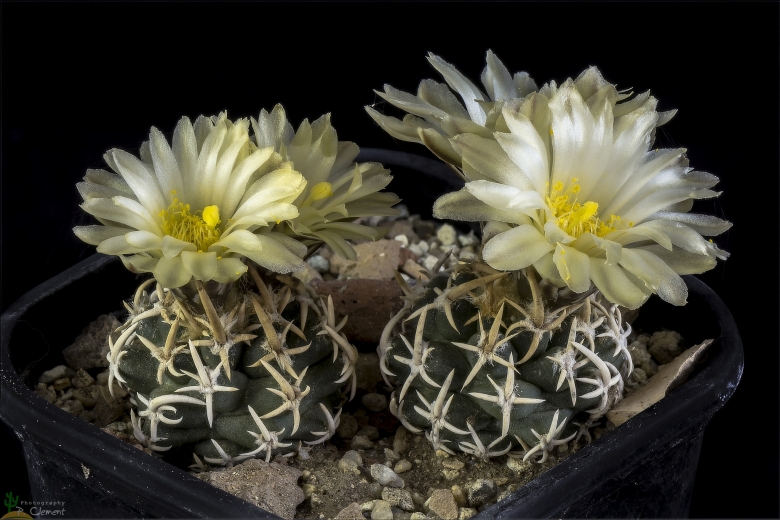 Origin and Habitat: Navajo County, Arizona.
Altitude: 1200-1600 metres above sea level.
Habitat: It grows widespread mostly on shallow well-drained soils derived from Kaibab Limestone among rocks on the margins of canyons, on well-drained sunny slopes or on flat hilltops in Navajoan desert or Great Plains grassland. It is an extremely rare and localized cactus, with only five known populations, which comprise some 1,000 individuals in total. The potential habitat for this species is estimated to be some 11.5 square kilometers, but the cactus is found on only 15 to 20 percent of this land. It is threatened by habitat destruction and by illegal plant collection. Drought has also been a significant threat to this cactus in recent years. Associated species include blue grama (Bouteloua gracilis), black grama (Bouteloua eriopoda), galleta (Hilaria jamesii), fourwing saltbush (Atriplex canescens), and sagebrush (Artemisia tridentata). Brady pincushion cactus (Pediocactus bradyi) also occurs close to this species.
Ecology: Pediocactus peeblesianus has a mycorrhizal association with Glomus deserticola and other fungi. Pollination: By insect

Description: Pediocactus peeblesianus (a.k.a Peeble's Cactus) is a very small, cactus that shrinks into the gravelly soils after flowering and fruiting.
Habit: It is a geophyte cactus species and the body may shrink and disappear under the soil in times of drought. It is almost always solitary, although it may occasionally branch, possibly as the result of injury.
Stem: Globose, depressed globose or egg-shaped, greyish green 2,2-7,5 cm tall, 2-5,5 cm in diameter, often nearly buried with only the summit visible above ground. Stems have nipple tipped tubercles that form a spiral pattern around the plant.
Areoles: Circular and hairy.
Spines: Corky/spongy, and flexible but have hard tips and not obscuring the stem. Ashy white to pale grey.
Central spine: (3-)4 (rarely 6), of which 1 longer pointed upwards and 3 intermediate flattened into a Maltese cross arrangement, 0,5-2,5 cm long, mostly 0,5 mm wide at the base.
Radial spines: 3-7 per areole, 2-10 mm long, recurving.
Flowers: Near the stem's apex, funnel-shaped, up to 2,5 cm long and 2 cm in diameter, cream, yellow or yellowish-green. Outer perianth segments pink or green with a darker mid-strip, oblanceolate, 5-13 long, 2-4,5 mm broad. Inner perianth segments cream, yellow, or yellowish green, lanceolate, 6-12(-15) mm long. The scales on the tube are yellow, cream to tan and have a brown center stripe minutely toothed or denticulate or entire and undulate. Stamens yellow. Stigma yellow.
Flowering time: Open during the day, blooms in spring (April and May).
Fruits: Green, turbinate, drying reddish 6-11 mm long and 5-8 mm in diameter
Seeds: Dark brown to black, 3 mm long, 2 mm broad, papillate and rugose.

Subspecies, varieties, forms and cultivars of plants belonging to the Pediocactus peeblesianus group 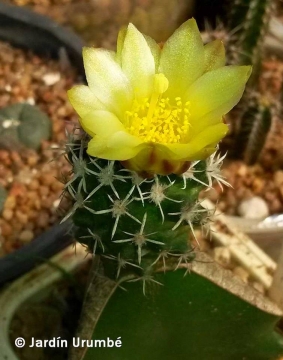 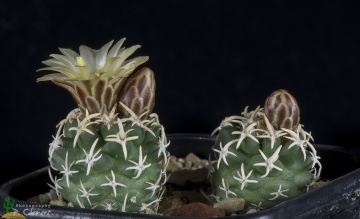 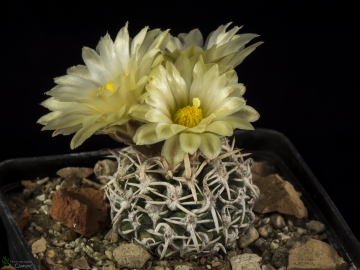 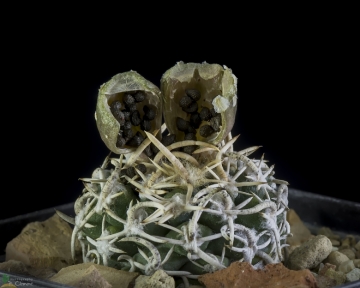 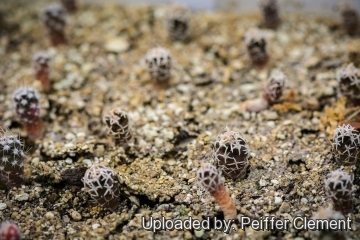 Seedlings of Cactus Navajoa peeblesiana Photo by: Peiffer Clement
Send a photo of this plant.

Cultivation and Propagation: Pediocactus peeblesianus is a most beautiful cactus but rarely seen in cultivation. It is quite difficult to grow on its own roots. Very easily rot! It’s thought that’s better to watch this species in photo or in the natural habitat rather than to try to cultivate it. For this reasons the plant is often grafted on a frost hardy stock.
Soil: Use mineral well-permeable substratum with very little or no organic matter (peat, humus).
It needs perfect drainage to flourish.
Repotting: Repotting every 2-3 years. As it is especially prone to rot under-pot in a smaller container filled with very porous compost. Use pot with good drainage.
Exposition: This plant need full sun and above all a very good ventilation, especially in winter. Tends to bronze in strong light, which encourages flowering and heavy spine production.
Watering:It needs regular water in late winter, early spring (the short main growing season), and also in Autumn and keep totally dry during winter. In the rest period no high atmospheric humidity!!Care must be taken with watering as they tends to become swollen and untidy in growth habit if given too much water and shade.
Fertilization: During the growing season enrich the soil using a fertilizer rich in potassium and phosphorous, but poor in nitrogen, because this chemical element doesn’t help the development of succulent plants, making them too soft and full of water.
Hardines: It can tolerate temperature below zero (-15° C or less). Mature individuals - if the growing conditions are not optimal, easily rot and die.
Pests & diseases: It may be attractive to a variety of insects to watch for:
- Red spiders: Sensitive to red spider mite. Overhead watering is helpful in controlling mites.
- Mealy bugs: Occasionally mealy bugs they develop aerial into the new growth among the wool with disfiguring results, but the worst types develop underground on the roots and are invisible except by their effects.
- Rot: Rot it is the major threat . If the plants are not watered and “aired” correctly, fungicides won't help all that much.
Remarks: Displaying your cacti on shelves has the added benefit of keeping them off the ground and away from potential rodent or snail damage.
Propagation: Seed or grafting. Temperature for optimum germination: night minimum approx 17 day maximum to near 40 C at any time of year with proper temperatures and day-length (ca.13-14 hours); it is possible to extend day-length with artificial lights. Anyway the seeds germinate slowly with difficulty and a low rate of success (But germiation is comparatively easy if compared with other Pediocactus and Sclerocactus species and often new seedling cluster spontaneously around the plant every year), scarification and stratification help, alternate freeze and thaw both wet and dry, but don’t keep wet, alternate wet and dry with changing temperature. Germination can take several years so keep pot and try again next year. Seedlings do not do well either, and some die each year, for this reason plants are commonly grafted on hardy stocks like Opuntia humifusa in this case they are easy to grow and no special skill is required. This species is better and easier if grafted.