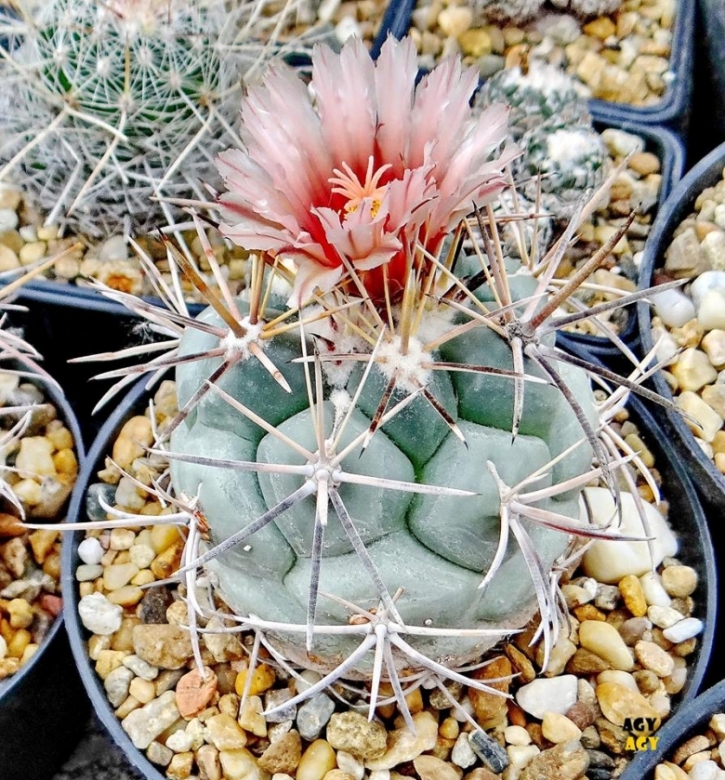 Origin and Habitat: Coryphantha poselgeriana has a large extent of occurrence in the Mexican states of Chihuahua, Coahuila, San Luis Potosí, Nuevo León, Zacatecas and Durango. The species has a scattered distribution where it occurs, and is not very abundant.
Altitude range: This species occurs at elevations of 1,000 to 1,300 metres above sea level.
Habitat: The species occurs in xerophile scrubs, in alluvial plains with bare, sandy or gravely soils, often on gypsum. Coryphantha poselgeriana has a large extent of occurrence there are no known threats.

Description: Coryphantha poselgeriana is a heavily spined, imposing species, and reminds one of an Echinocactus. The nomenclature of this variable taxon is quite confusing. The flower colour of C. poselgeriana varies from red to yellowish-white.
Remarks: This clinal specie has two forms, often referred to as distinct varieties or subspecies. The plants from North of the Sierra de Paila are more strongly spined (var. valida) than the ones to the South, which have more radials (var. saltillensis). But the transition is continuous, and separation of a subspecies is questionable.
Stem: Globular to short cylindrical, solitary or slowly clumping, reaching up to 30 cm in height and 18 cm in width. Dull bluish green, apex rounded and woolly.
Roots: Thin taproot.
Tubercles: Up to 2(-3) cm long and 5 cm wide, convex, conical, 4-6 edged with a deep wooly groove, near the areole, rounded near the end. Parastichy number 8-13. With yellow-orange glands over the whole length. Axil woolly with glands.
Areoles: About 7 mm wide, round with short wool.
Radial spines: 5 to 12, with 7-8 of them radiating sideways and downwards, straight or recurved, strong, subulate, the 3-4 lower ones are somewhat fattened, up to 30-40 mm long. Whitish, later reddish or blackish, with a darker tip and ultimately greysh.
Central spines: 1, straight, porrect, with light tip. Similar in shape and colour to lower radials.
Flowers: 6-7 cm, varying from whitish-rose with a pink centre, to carmine red, and in San Luis Potosí even yellow-flowering forms occur.
Fruits: Green, juicy, with persisting flower remnants. 25-50mm long, 7-18 in diameter.
Seeds: Reniform 2-2,5 mm long, 1,5 mm wide.

Subspecies, varieties, forms and cultivars of plants belonging to the Coryphantha poselgeriana group 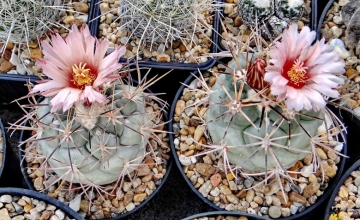 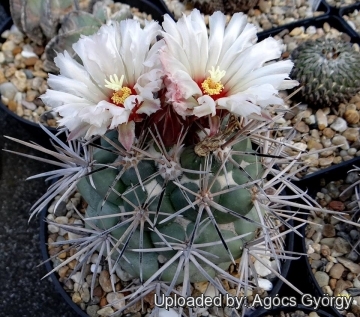 Cultivation and Propagation: This plant grows in the same habitat as Echinocactus horizonthalonius, with which it has some cultivation problems in common: slow-growing, seldom reaching the same size as in nature, sensitive against over-watering. Water sparingly. It needs good drainage. Keep drier in winter. Full sun to partial shade. Full sun to partial shade. I n humid conditions, the exudation of nectar (if not completely removed by ants) can cause the formation of mould, which leads to ugly black-colouring of the epidermis. To prevent this, spray the plant with water to remove the nectar. And provide very good ventilation.
*Propagation: Seeds.