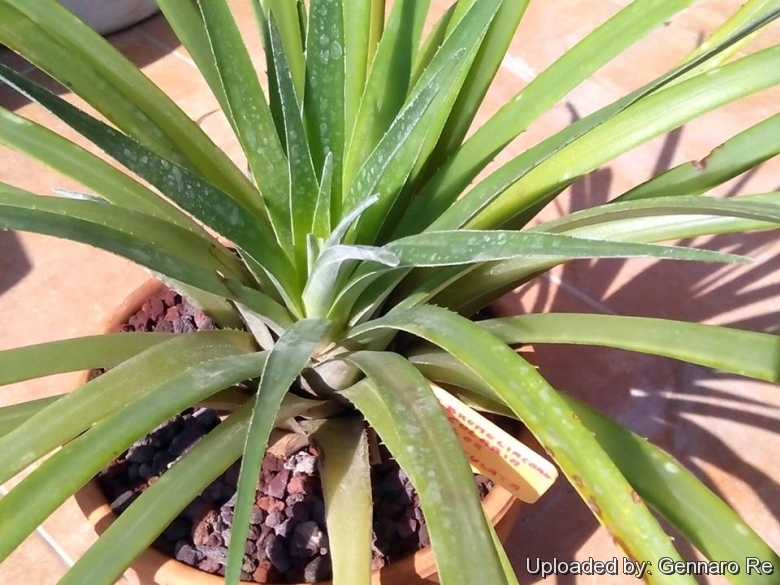 Origin and Habitat: Chile South (Los Lagos). Type Locality: Valdivia, La Union, Llancucura. This plant comes from south-central coastal Chile and is considered to have the most southern distribution in the Bromeliad family. It has naturalised in parts of Florida, in Ireland, on the Isles of Scilly and in parts of western France.
Habitat and ecology: Fascicularia pitcairnifolia or Fascicularia bicolor subsp.canaliculata grows in the temperate forests, often under shady conditions and sometimes growing epiphytic, which means it grows on trees. By the other hand Fascicularia bicolor with conspicuously more succulent leaves grows terrestrial, is saxicolous, which means it grows on rocky ground. It grows largely in more open habitats, often on the coast and is hardier than F. bicolor ssp.canaliculata.

Description: Fascicularia bicolor ssp. canaliculata (aka Fascicularia pitcairniifolia) is an evergreen epiphytic or terrestrial bromeliad to 60 cm tall with rosettes holding arching soft spine-margined, strappy leaves that reach out to 90(-100) cm long, and are green on the upper surface and silvery white below. When plant flowers the center of the rosette turn scarlet surrounding the dense cluster of striking blue flowers tipped with bright yellow pollen. Each rosette may persist for many years; they do not die after flowering, but an individual rosette will only produce one inflorescence. It is not a true succulent but it is a xerophyte which means it adapted to live in dry areas.
Leaves: Green, innermost turning scarlet or red when rosette is in bloom, blade strap-like 25-90 (-130) cm long, (6-)8-11 mm wide, not markedly succulent towards base, adaxial (upper) surface distinctly channelled especia1ly below middle towards the leaf base, margins distinctly recurving.
Inflorescence: 4-5.5 cm long, 4-6.5(-8) cm in diameter; bracts (2.2)3-3.8 cm long.
Flowers: (2.2-)3.3-4.4 cm long, pale blue to blue.
Taxonomic notes: There is a lot of confusion over the names of Fascicularia pitcairnifolia and Fascicularia bicolor. Fascicularia pitcairniifolia (often seen as "pitcairniaefolia" or "pitcairnifolia") has now been renamed Fascicularia bicolor subsp. canaliculata, and Fascicularia bicolor is now Fascicularia bicolor subsp. bicolor. The name "pitcairniifolia" should not be used because it is "ill defined" but it is still used in horticulture. F. bicolor has leaves which are shorter, thicker and more succulent and the pale blue tubular flowers subtended by ivory-colored bracts that develop fully starting from the outside with the inner flowers opening last. F. bicolor subsp.canaliculata has longer, toothed leaves and deep blue flowers which open from the centre outwards.

Subspecies, varieties, forms and cultivars of plants belonging to the Fascicularia bicolor group 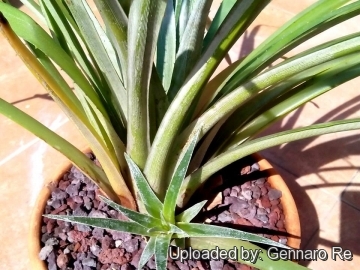 Fascicularia bicolor subs. canaliculata Photo by: Gennaro Re
Send a photo of this plant.

Cultivation and Propagation: Fascicularia bicolor is easy to grow, and is perhaps hardier than realized. Plants readily produce offsets so that large clonal colonies are easily established, and these can apparently be very long-lived. Plant in full sun to medium shade. It has low water needs and is frost and cold hardy to about -10 degrees Celsius. In Europe of course it can be grown in the ground. Both these two Fascicularia subspecies need stony ground with plenty of grit which does not get wet. They will slowly grow into large mounds of rosettes. They can also be grown in a large pot and would be quite happy if allowed to get pot bound. They look good grouped with other succulents. It is possible to grow it on the edge of a roof. Of course to do this you need to make sure you have the epiphytic form.
It a great plant for under live trees; never needs to be irrigated, but the fallen leaves get trapped in it and look unsightly; removing them is a painful job. Although the foliage appears spiny they are not wicked and can be safely planted along pathways.
Propagation: Offsets or division larger clumps. The trouble is the hooked teeth of the leaves on them and they may be vicious.