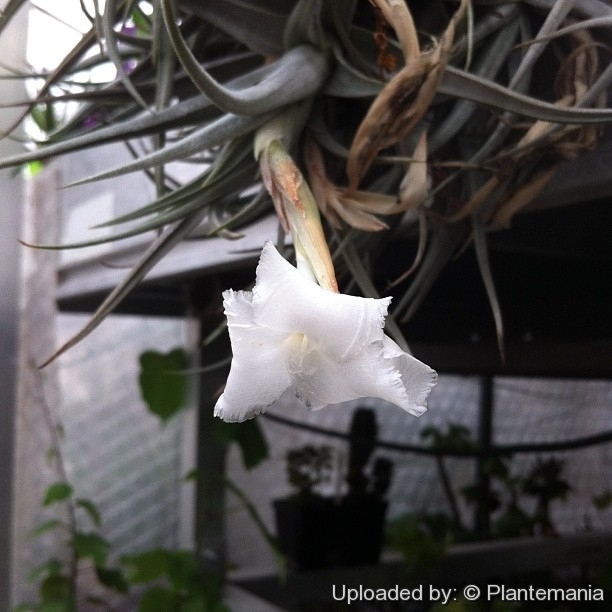 Description: Tillandsia xiphioides is a remarkably pretty and deliciously scented plant. Introduced in 1816 this tillandsia is a small rigid herb covered with grey silvery tomentum. The thick grey channeled leaves grow in a contorted fashion to form a stiff, somewhat one-sided, upright rosette from the centre of which emerges the simple spiked inflorescence bearing wavy pure white flowers, which are are exceptionally large for the genus. It has continued to be popular down through the years because the flowers emit a sweet fragrance described as comparable to that of a gardenia or of a carnation. This species is stemless or shortly caulescent and quite variable as to size, but the average flowering plant will reach about 15 cm in width and height. A large specimen may grows to as much as 22-30 cm.
Derivation of specific name: Xiphioides is a Greek compound word. Xiphos is the noun for "sword," and -ides, an adjectival suffix, indicates a "resemblance." The epithet, which means "swordlike," refers to the lanceolate shape of the inflorescence.
Leaves: Crowded rosulate, 10-15 cm long 12 mm blades are erect to spreading, silver , brown, and green, lepidote, narrowly triangular, broad at the base broadly subulate, channeled with reclined margins that are involute at the tip.
Inflorescence. Scape, simple, long or short. Spike 7.5-10 cm long exceeding the length of the leaves, distichous, compressed of many closely imbricating linear oblong bracts two inches long, bearing 2 to 10 flowers.
Flowers: Numerous, wavy, snow white and exceptionally large for the genus. Sepals linear lanceolate acuminate. Petals with a slender linear claw 2.5 cm long and broadly obovate acuminate reflexed white ruffled edge.
Remarks: Tillandsia xiphioides is often confused with the green leafed Tillandsia ixioides because of name similarity.

Cultivation and Propagation: Tillandsia xiphioides produces, when mature, large pure white flowers. This is among the most beautiful of its genus and one that is very easily cultivated. Grow it in a well ventilated place mounted on wood or grown bare root. It produces roots readily and affixes itself to the growing substrate. It likes bright light and grows thick roots.
Moisture: It's a little more susceptible to rot from being too wet for too long and to colder temps.
Exposure: This plant likes bright indirect light and it is best placed in a sheltered spot in the garden during the summer to facilitate flowering. Dappled to Full Sun
Hardiness: USDA Hardiness Zone 9 to 11. These curious plants may be grown outdoors as long as temperatures do not drop below 5° degrees Celsius.
pH Range: 5.5 to 7.5.
Propagation: Division or seed. Plants can be divided at any time of the year. When removing offsets from tillandsias we usually remove the old leaves from the mother plant to reveal the base of the offset and enable us to remove it without damage.