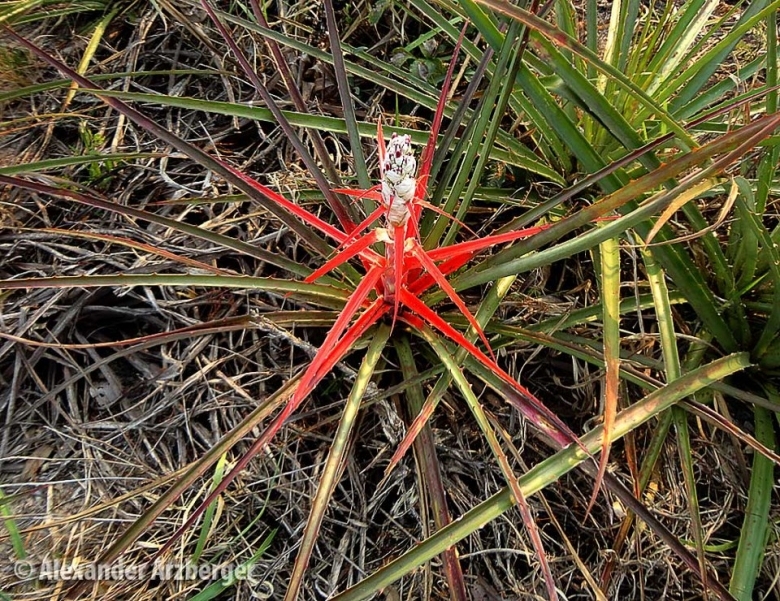 Origin and Habitat: Bolivia and Central Brazil to Paraguay and northern Argentina (provinces of Salta, Formosa, Chaco, Corrientes, and Misiones). Here occasionally also cultivated.
Type locality: Gran Chaco, Argentina.
Habitat and ecology: Gran Chaco ecoregion. This species is a terrestrial herb that grows in the understory of Chaco and Cerrado woodlands and often forms the ground layer together with other bromeliads and cacti such as: the firecracker cactus or scarlet bugler (Cleistocactus baumanii) and Aechmea distichantha, just to cite some of the more common. It reproduces by stolons. The species is particularly under threat from habitat conversion to agriculture and desertification. Farmers consider it a weed, because its thorns frighten the cattle, so sometimes they burn the chaguarales (dense colonies of bromeliads) during the dry season. The colonies of Bromelia serra act as traps capturing propagules and litter falling from the canopy. Therefore, they seem to be important microsites for seed accumulation of woody species. However, it is not known whether bromeliads are a safe site for seedling establishment.

Cultivation and Propagation: Bromelia serra is a sometime cultivated due to the beauty of the foliage and of the inflorescence and the facility of cultivation. The leaf turns bright red when flowering. The flower is purple and not very conspicuous. It a good ground cover in xeric gardens, but the spines are wicked as some pineapples (Ananas). They may form a low ground cover that will keep the neighbor's dog out if it is wide enough. This species will grows on rocks or on top of the ground but it will grow faster if rooted in well drained soil.
Growing substrate: It requires a well-drained, aerated, gritty, humus rich, neutral to acidic, and moisture-retentive substratum (e.g. 2 parts peat moss to 1 part loam to 1 part sand or perlite).
Exposition: It will grow in any exposure from full sun to full shade. Growth is faster and the leaves are more rigid in full sun..
Watering: In summer it enjoys constant moderate waterings from rain or sprinkler, but allow the plant to dry in-between waterings, and reduced in winter. However it is quite drought-tolerant. Requires complete and perfect drainage as root rot can be a problem if the soil is too moist.
Fertilizing: Fertilize every 4-week during the growing season with a balanced fertilizer diluted to ½ the strength recommended on the label. Apply mild solutions (one-quartet strength) of foliar fertilizer at 3-month intervals to both garden and container plants.
Hardiness: This Bromelia does not like the cold. It is cultivated in open air in the tropical and subtropical climate countries, with temperatures which it is good to keep over the 14°C, best 20-24°C , but can withstand light frost for short periods if very dry (hardy down to -2, even if with damage to the foliage) in these situations it will better resist if sheltered by the winter rains, seen that the humidity and low temperatures render it more sensitive to rottenness. Plants in containers however, suffered major leaf loss. USDA Zone 9b to 11
Pest & diseases: It is susceptible to scale, trips and mosquitos that will sometimes breed in the pools of water that are trapped between the leaves. Mealybugs infestations and fungal leaf spots are also a frequent problem.
Pruning: Remove old leaves from plant base and dead flower spikes only. Remove older plant crown when it begins to fade.
Ornamental uses: Useful as a border or groundcover.
Traditional uses: Very young shoots and the fruits are edible, and the leaves deliver fibres usable to make bags etc. Bromelia serra, the chaguar (a common name for several related species of South American plants), is a plant producing textile fibre, along with Bromelia hieronymi, Deinacanthon urbanianum, Pseudananas sagenarius, all herbaceous forest plants with in sword-shaped leaves, evergreen, reminding Yucca. The fibrous leaves are used to make ropes, ponchos, clothing, nets, bags etc. Very young shoots and the fruits are edible,the stem is roasted and eaten, and the fruit is boiled to obtain a thick syrup. Children participate actively in the gathering of wild fruits.
Propagation: Remove and replant offshoots from around the parent plant in late spring or early summer. Sow seed at 27ºC as soon as ripe.
Warning: The edges of the leaves are incredibly armed with sharp teeth and never fail to draw blood so use extreme caution when handling.