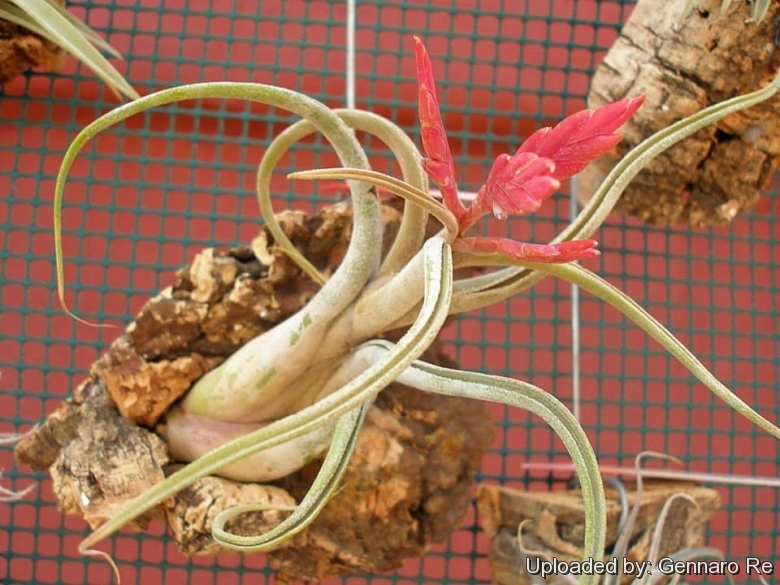 Tillandsia caput-medusae Photo by: Gennaro Re

Origin and Habitat: Mexico and Central America (El Salvador, Honduras, Costa Rica and Guatemala)
Altitude range: From sea level to 2,400 meters in elevation
Habitat and ecology: It grows epiphytically on trees and tends to grow singly or in small clusters of two to a dozen plants. Ants establish their nests in the inflated base of the stem.

Description: Tillandsia caput-medusae is one of the most widespread, hardy and commonly cultivated bromeliad species. Caput means "head" and medusae means "of Medusa." In Greek mythology, Medusa was the Roman Gorgon whose coiffure consisted of wriggling snakes — an imaginative metaphor for the thick, tapering, twisting, and silver-scaled leaf blades of this species. The rosette of leaves usually hangs upside down and arise from an inflated pseudobulb often inhabited by ants. The red inflorescences are usually unbranched or digitate. Bright violet flowers are about 3.2 cm long with the stamens exerted. They are very showy.
Rosettes: Stemless, very variable in size, (10-)15-35(--40) cm high. In Guatemala, small forms rarely more than 10 cm. high thrive in dry gullies that are virtually cloudless and rainless except for the July-August rainy season. Humidity from trickling streams and gullies allows the plants to exploit the habitat. The intense heat and lack of available water keep the plants from attaining a larger size. Larger forms that are about 24 cm. wide and 20 cm. high also grow in droughty habitats but receive moisture at more frequent intervals. Some giant specimens of this species have been known to reach a height and width of 35 cm.
Leaves. often exceeding the inflorescence, coarsely lepidote, sheaths large, blades involute-subulate (channelled), usually twisted, ca. 15 mm wide.
inflorescence: scape erect or nearly so, slender; scape-bracts imbricate, foliaceous. Inflorescence usually unbranched or digitate from 2-6 spikes; primary bracts usually smaller than the floral bracts and practically bladeless; spikes linear-lanceolate, to 15 cm. long with reduced sterile bracts at base; floral bracts imbricate, lance-ovate, obtuse, ecarinate, to 2 cm. long, equaling or exceeding the sepals, chartaceous.
Flowers: Sepals oblong, obtuse, glabrous, the posterior ones connate. Petals 3-4 cm. long, violet. Stamens exserted.
Blooming season: In a greenhouse, the plants can bloom from spring to early summer. 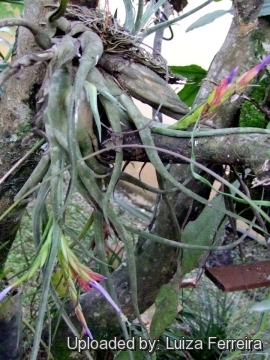 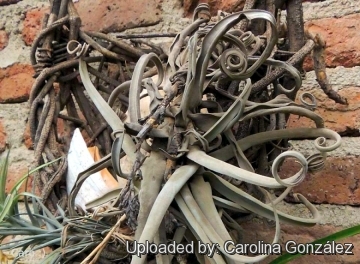 Cultivation and Propagation: The Medusa's head (Tillandsia caput-medusae) is a slow-growing bulbous variety and perhaps one of the mainstays in most everyone's collection, requiring bright light and controlled watering to prevent constant wetness. It is drought tolerant, and will thrive within a broad latitude of care conditions, but like other myrmecophytic, pseudobulbous species, T. caput-medusae is often not so easy to grow because it rots more easily than many of the others. One way to avoid this, as with these other similar types, is to grow it mounted or hanging sideways to upside down. In this manner, no water will be able to collect in the base of the plant, something that can initiate the rotting process.
Outdoors grow the air plant nestled in the highest reaches of a tree where it will receive very bright light and excellent air circulation.
Growth rate: It grows slowly, often needing two or three growing seasons to reach maturity. It produces a substantial root system and responds to good cultivation. If one has patience, a large clump can be produced in a few years.
Soil: It is is exclusively epiphyte, which means it naturally grows on trees and needs no soil or transplanting.
Exposition: It grows best in full sun to partial sun. In the hottest climates, it is best given some afternoon shade. In a dark location the plant will gradually weaken and wither. In winter, find a luminous place. Its colour is generally more intense when budding and when getting lots of light.
Watering: It takes in all of the water and nutrients it needs from the air so it should not be watered as frequently as other airplants. Just like for carnivorous plants, water them with rainwater or demineralized water. You can mist the leaves once or twice weekly depending on the humidity levels in the greenhouse (or even daily during the hotter part of summer), and make sure the plant gets dry quickly, whilst in winter with low temperatures it is better to leave it quite dry for avoiding possible rottenness. The plants in nature are extremely drought tolerant.
Fertilizer: The plant can grow without no fertilizer, because they make use of small traces of nutrients in the air, but you can apply a mild solutions (one-quartet strength) of foliar fertilizer at 3-month intervals to both garden and container plants.
Hardiness: They are sensitive to heavy frost, but can easily tolerate sporadic light frost. However they grow best in a spot with plenty of light, with summertime temperatures of 20-30 C degrees or higher and winter temperatures around 15 ° C. USDA Zones 8 – 11. Put them inside or outside in summer when the weather is fine. Can live in a wide range of temperature, from 15°C to 45°C.
Propagation: Division or seed. Tillandsia caput-medusae is easily propagated by removal of offsets at any time of the year. The plantlets must be hung on bark slabs. In the greenhouse you can attach the offsets to slabs of oak wood with small staples holding the roots on the wood until they attach themselves. This can also be done with a small patch of hot glue (just not too hot) to hold the plants in place. Around the base you can use some reindeer moss to cover the roots and to hold moisture. Pups are produced after blooming, as is usual with most tillandsia species.
Seeds are germinated on peat moss. Seeds need light to germinate. One easy way to tell apart plant raised from seeds or division is to look at the plant. While not always the case, generally it is true that if the leaves are relatively straight and short and there are no roots the plant is an offset taken from a mother plant. If the converse is true, that is, the leaves are long and curving and there is a root system present, then this plant will be a number of years old and grown from a seed.