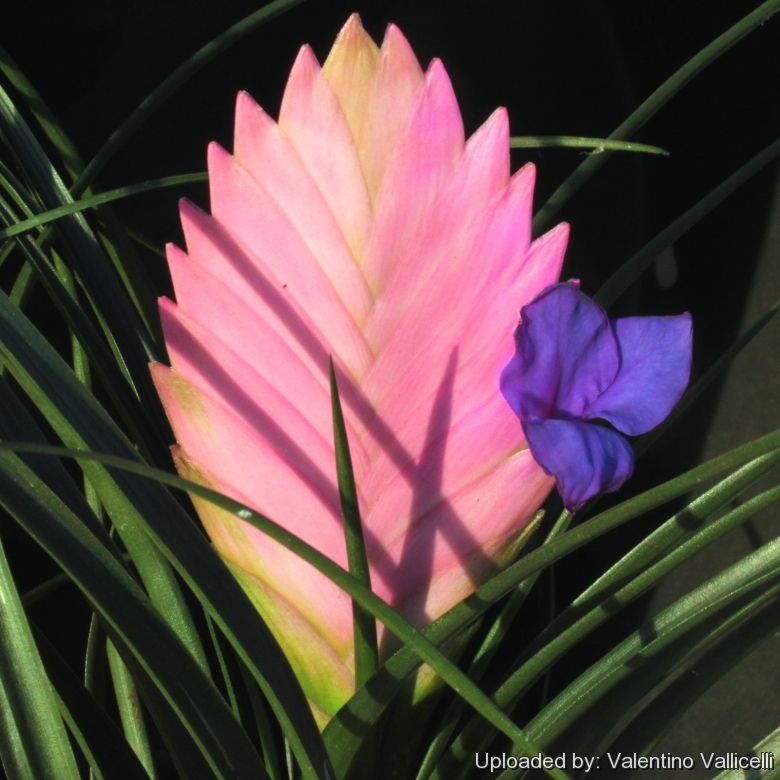 Tillandsia cyanea Photo by: Valentino Vallicelli
Only a few of the pansy-shaped purple-blue flowers are open at any one time, but the head of overlapping pink bracts can last for several months.

Origin and Habitat: Ecuador.
Habitat: It lives epiphytically on trees but will grow on almost anything. The arched, folded leaves act as collectors for dew or mist. After condensing, the water trickles to the base of the stem, where it is absorbed. This method is so efficient that the plant needs almost no root system. When the plants have roots, they use them to hold on to a perch. Moisture and nourishment enter through the scales on the leaves.

Description: Tillandsia cyanea is one of the most widely cultivated tillandsias with arching leaves arranged in a loose rosette It has a large showy bloom; a hot pink spike with purple flowers. It is a medium sized species and one of the few tillandsias that grows best when potted, though it may also be grown mounted.
Stem: Stemless
Rosette: About 30 to 50 cm. in width and 18-30 cm. in height in the non-blooming state.
Leaves: Up to 35cm long, narrow, grass-like, channelled, medium-green, reddish-brown at the base and decorated with reddish brown, longitudinal lines.
Inflorescence: The flower-scape is a plump blade-like feather that may reach 20cm long with bright pink-violet or red bracts.
Flowers: Pansy-shaped, three-petalled purple, in a tone colour between pink-violet to dark-blue (The specific epithet “cyanea” means blue), that appear successively along the edge of the spike between the bracts, 1 or 2 at a time, for long periods. Some have a cinnamon-clove fragrance especially in the morning.
Blooming season: Winter. Its inflorescence can last several months. Each purple-blue flower lasts 1-3 days, and it continues to produce the flowers for 1-3 months. 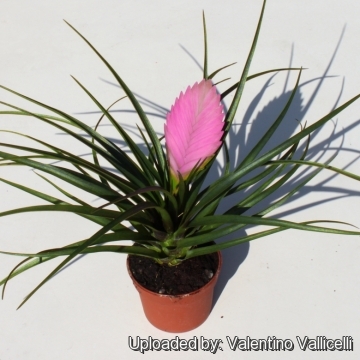 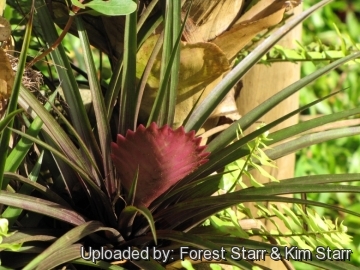 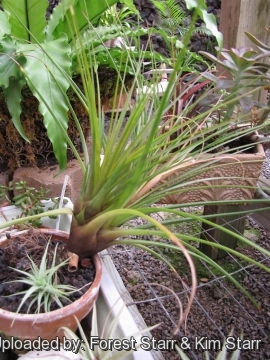 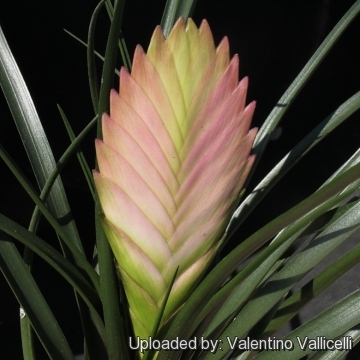 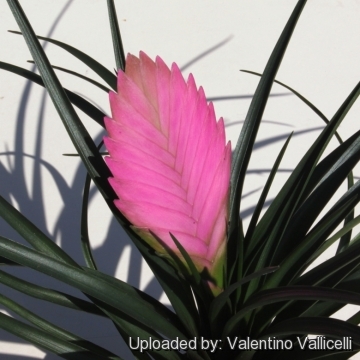 Tillandsia cyanea Photo by: Valentino Vallicelli
Send a photo of this plant.

Cultivation and Propagation: The plant is easy to grow, and will thrive within a broad latitude of care conditions. Locate in a well ventilated place.
Soil: This species seems to grow faster potted up unlike most Tillandsia which prefers to be mounted on wood or grown bare root. Under these conditions they develop a significant root system, which appears to produce a more robust and prolific plant. Transplant them in spring and, if potted, it must be in a free-draining soil (i.e. leaf mold, peat and sphagnum added with perlite, sharp sand or orchid bark, pH Range 5,5 to 7,5). They can also be grown on slabs of bark or tree fern fibre.
Exposure: This plant likes bright indirect light and protection from hot sun, it is best placed in a sheltered spot in the garden during the summer to facilitate flowering. Low light often diminishes the inflorescence colours. In a dark location the plant will gradually weaken and wither.
Fertilizing: It should be watered with a liquid fertilizer diluted to ½ the strength recommended on the label added to the current irrigation water once a month from spring to autumn. Can also be applied to the leaves.
Waterings: Allow medium to dry out between watering. From mid spring through fall, mist daily. If grown outdoors, keep dry during winter. All of the leaf surfaces should dry between waterings. If the plants in a clump become wet and remain so for a few days they may suffocate and die. In a clump, air cannot circulate among the leaves as well as in individual plants.
Temperature: It must be grown in a frost-free situation in open air in the tropical and humid subtropical climates, with temperatures which it is good to keep over the 8°C, best 20-24°C. However its cultivation can be tried also in the warm temperate climates, in sheltered position, as it can stand, for short time, temperatures around the -2°C (but plants foliage will suffer little cold damage where frost settles on them). Winter hardy to USDA Zones 10-11. North of Zone 10, this bromeliad is usually grown in containers that must be overwintered indoors.
Pest & diseases: No serious insect or disease problems. Watch for aphids, thrips and scale. Mealybugs infestations are also a frequent problem. Rot may develop if soil is kept too moist.
Maintenance: Transplant them in spring. Remember to give your plants enough space to expand; it is not unusual for a single Tillandsia cyanea to produce 10 to 12 offsets.
Propagation: Division or seed. The primary plant tends to die off after flowering, but will be replaced by the offshoots. Plants can be divided at any time of the year. Seeds are germinated on peat moss. Seeds need light to germinate