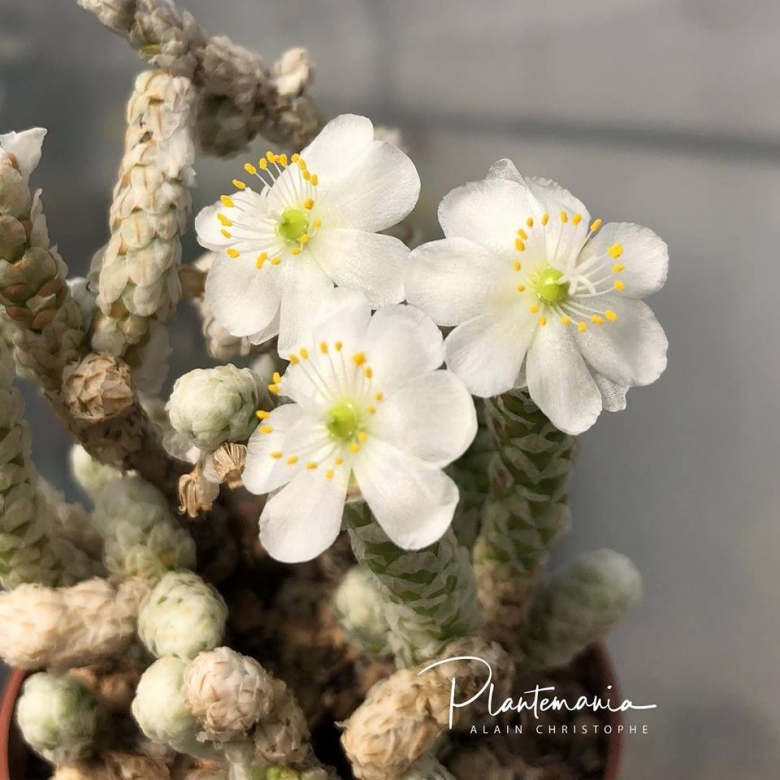 Origin and Habitat: Avonia recurvata is endemic to a small distribution area near Kakamas (from Stcinkopf in Namaqualand to Pofadder) in the Northern Cape, South Africa. All the subspecies lying south-east of the Orange River in the Northern Cape from the south-east of the Richtersveld southwards into Namaqualand. It is the the most widespread member of its genus.
Habitat and ecology: Avonia recurvata is small highly specialized plant that grows in full sun on high quartz ridges and slopes in arid conditions. The unique white scales reflect much of the light and act as sun-shades over the tiny leaves beneath. Whole plants mimic bird droppings or the white rocks in which they frequently grow and have been regarded as "mimicry plants", for long escaping the eyes of even the most attentive field workers. They can thrive in areas where grazing goats have cropped almost everything else into none xistence. It is possible potential predators do not recognize avonias as a suitable food, or perhaps the plants simply are unpalatable. Avonia recurvata is not considered to be threatened in its habitat early in the twenty first century.

Description: Avonia recurvata (Anacampseros recurvata subsp. recurvata), is a branching dwarf succulent, growing trailing or sub-erect white-shingled stems to 8 cm in length that arise from a tuberous rootstock (caudex). The leaf covering stipules are silvery-white, overlapping, scale-like but loosely positioned over the tiny leaves and adpressed to the stems. They give the plant an untidy, characteristic papery appearance. In the typical plants the scale tips are turned outwards. Flowers are white, scented with about 15 stamens.
Rootock (Caudex): Tuberously thickened, storing water.
Branch stems: Up to 80 mm long, erect or semi-erect completely covered by their spirally arranged leaves and about 4 mm in diameter. Both main and lateral branches are few.
Leaves: Semiterete, 1 mm long, 2 mm wide, lower surface convex, covered by lanceolate stipular scales about 3 mm long, laxly arranged, partly exposing the leaf-tips, with a yellowish-green median line, scale tips when curving outwards giving the stem a shaggy appearance; axillary hairs are present. In the typical plants the scale tips are turned outwards with a light green median nerve.
Flowers: Scented with about 15 stamens. The beige-brown withered flower remains from the previous season can be seen on the bigger stems of the plant.
Similar species. Avonia recurvata, Avonia meyeri and Avonia ruschii. None of these or many of the others species are easy to identify, partly because of the many intermediate forms to be found. Some species are fairly distinct, others intergrade, as in the series Avonia albissima, Avonia papyracea, Avonia buderiana, Avonia recurvata and further into Avonia meyeri. A number of species will have to be dropped, or be reduced to varietal status, and the genus certainly needs some systematic cleansing.

Subspecies, varieties, forms and cultivars of plants belonging to the Avonia recurvata group 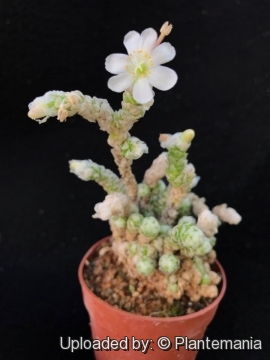 Avonia recurvata Photo by: © Plantemania
Send a photo of this plant.

Cultivation and Propagation: Though Avonias come from the winter rain-fall region, they can all be trained to grow in summer.