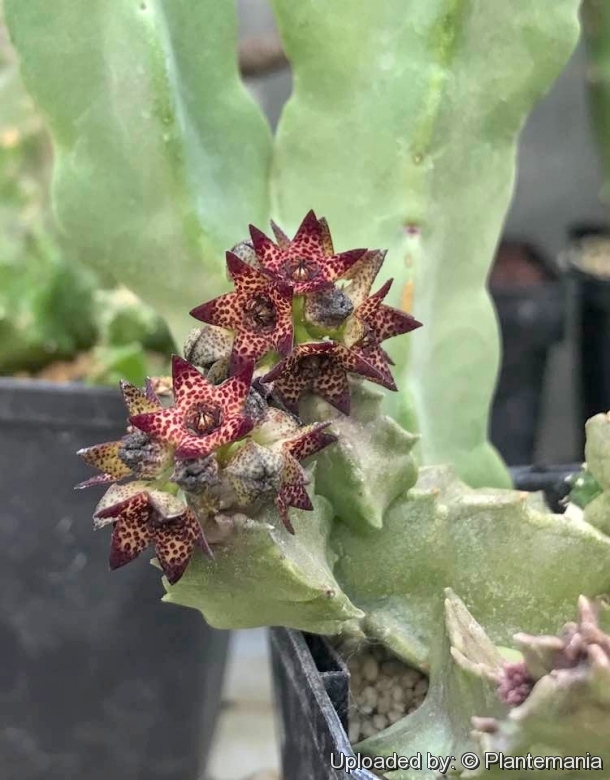 Origin and Habitat: Oman (Arabian Peninsula, Asia-Temperate). This new species occurrence here in the far eastern edge of the Dhofar region marks this as the eastern most representative of the genus Sulcolluma.
Type locality: Dhofar Province, on granites at the base of Jebel Samhan, Dhofar's highest mountain, appox. 8 km N/NE of the small coastal village of Mirbat, alt. 20 m. Latitude: 17° N. Longitude: 54° E
Habitat and ecology: Sulcolluma mirbatensis is found growing on granite, instead of the much more prominent limestone, which forms the greater part of the Dhofar [1].

Description: Sulcolluma mirbatensis is one of the controversial species of the genus Sulcolluma, a small group of stapeliads generally included within (as a synonym of) Caralluma hexagona, suggesting that there is not really a fundamental difference between them, and hard to name accurately without knowing where they come from, and there remains a considerable confusion surrounding the true identity of this these plants. All sulcollumas exhibit a distinctive groove in the upper surface of their stem tubercles. The most distinctive feature of S. mirbatensis, is its erect inner corona lobes, unlike the other members of the genus whose have their inner corona lobes incumbent on the anthers. Another important character is that S. mirbatensis possesses the smallest flowers of the group [1].

Subspecies, varieties, forms and cultivars of plants belonging to the Carallum exagona group

Caralluma hexagona is extremely variable, three species and three varieties have been described but plants with intermediate or not typical characteristics occur at random in each populations, and often within a single population both flat and campanulate flowers will sometimes be found. Nor the shape and colour of the corolla-lobes is sufficient to distinguish without ambiguity between species. The number of ribs varies from 4 to 6, but seems to be unreliable in certain groups, and is therefore of little use in separating these taxa. It appears that there is inherently a large range of variation in many of the features of these plants and it is possible that this is brought about by highly localized modifications of the very harsh environment in which they occur. 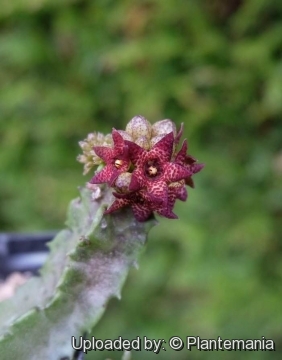 The gallery now contains thousands of pictures, however it is possible to do even more. We are, of course, seeking photos of species not yet shown in the gallery but not only that, we are also looking for better pictures than those already present. Read More...
Cite this page: "Sulcolluma mirbatensis" Text available under a CC-BY-SA Creative Commons Attribution License. www.llifle.com 14 Nov. 2005. 01 Oct 2020. </Encyclopedia/SUCCULENTS/Family/Asclepiadaceae/34114/Sulcolluma_mirbatensis>