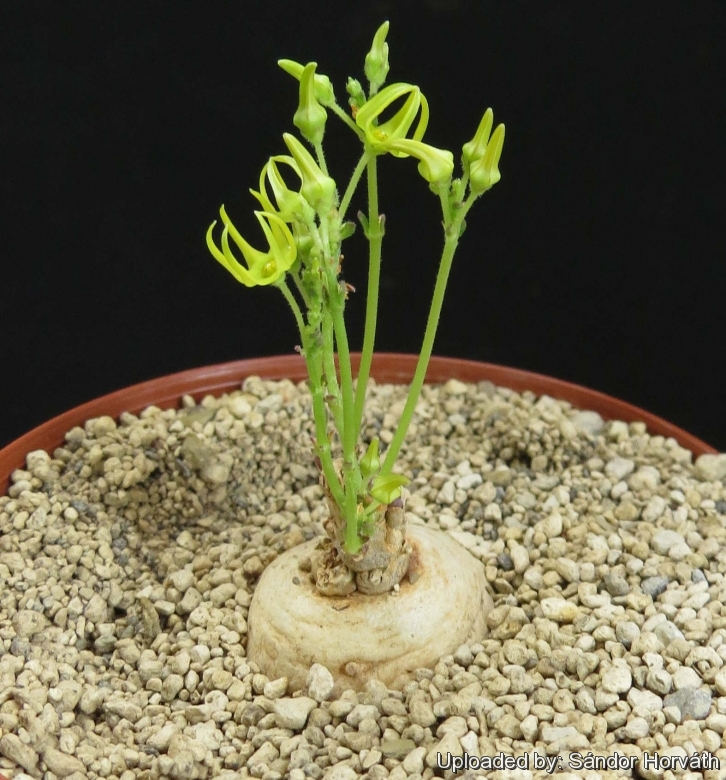 Description: Brachystelma pygmaeum is a pigmy-sized perennial herb with spreading annual hairy stems to 12 cm long, growing from a slightly depressed tuber (caudex). The leaves are narrowly to broadly ovate, short-stalked and thinly hairy below. The flowers appears in group of 1-3 in the upper leaf axils in spring. The corolla has a shallow tube, with slender perianth lobes fusing at the tips to form a lantern-like cage, or “window flower”, over the column; they vary from greenish to purple-brown but mostly pale yellow, and sometimes appear before the leaves. The corona is much reduced and appear as an extension to the gymnostegium. The "window flowers" are found also in the genus Ceropegia, which is closely related to Brachystelma.
Derivation of specific name: 'pygmaeum' (Latin), pygmy.
Tuber (caudex): Turnip-shaped, slightly depressed, 40-100 mm in diameter, mostly underground.
Stem: Aerial shoot few to several, sometimes with flowers before leaves, simple or slightly branched from the base, erect or spreading with age, 4-8 cm high, puberulous.
Leaves: Arranged in an alternate or opposite position, sometimes undeveloped at the time of flowering, spreading, 4-20 mm long, 1.5-6 mm broad, linear-spathulate, oblanceolate or oblong-lanceolate, acute or obtuse, cuneately narrowed into a short petiole at the base, glabrous on both sides except along the midrib beneath, sometimes folding up with age and shortly ciliate.
Flowers: 1–3 together, lateral at the nodes. Pedicels 3-8 mm long, puberulous. Sepals about 1.5 mm long, linear-lanceolate, acute, puberulous. Corolla usually cage-or- lantern-like 6-10 mm long, greenish or chrome-yellow to purple-brown, with the lobes connate at the tips, but sometimes with free and more or less spreading lobes, and rarely both forms on the same specimen. Corolla-tube about 1.5 mm long, shallowly cup-shaped, glabrous outside, puberulous within (the hairs more or less invisible when wetted), apparently yellowish or greenish. Corolla-lobes 4-6 mm long, linear from a deltoid base, when free varying from nearly straight to circinately inrolled at the tips, puberulous at the base on the inner face, otherwise entirely glabrous, apparently olive-green or purple-brown. Outer corona very variable, even in flowers upon the same branch, arising 0.5-0.75 mm up the 1mm-long staminal column, consisting of 5 minute entire pouches or 5 distinct lobes, which are sometimes very minute, at others more distinct and subquadrate, usually emarginate or shortly bifid, or the lobes are all connate into an entire narrow ring or cup entirely surrounding the column, sprinkled on the back and on the column immediately beneath them with minute but rather thick or papilla-like hairs and sometimes more or less ciliate with them. Inner corona-lobes 0.25–0.30 mm long, linear-oblong, obtuse or notched at the apex, incumbent upon the backs of the anthers and not exceeding them, much larger than the outer corona-lobes, glabrous.
Blooming season: Flowers late winter to early spring (July-October).
Fruits (follicles): One or two follicles per flower.

Brachystelma pygmaeum Photo by: Sándor Horváth
Send a photo of this plant.

Cultivation and Propagation: Brachystelma pygmaeum is hardy in cultivation.
Soil: It grows best in deep earthenware pots in a very draining but rich soil. An error in cultivation may produce unsightly holes in the tuber.
Exposure: In cultivation the plants are usually grown in semi shade, with the tubers wholly or (preferably) partially exposed to prevent scorching and rotting of the roots. When the plants are kept in half a day's sunlight their natural compact habit is maintained, a characteristic feature of most plants in habitat
Hardiness: It should be overwintered in the greenhouse at temperatures over 12°C (avoid letting temperatures drop lower than 5° C).
Water requirements: This plant can take a good deal of water during active growth and should be watered only when not dormant. Keep dryish in winter.
Reproduction: This species can be reproduced by seeds.