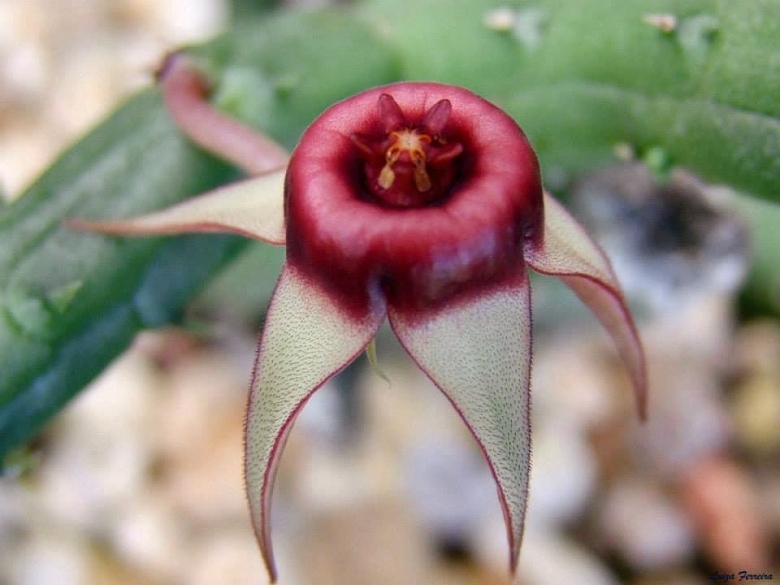 Origin and Habitat: Huernia procumbens is found on both sides of the Limpopo River south-east of Messina to Pafuri in Zimbabwe and the Northern Province in South Africa (Transvaal), and probably Mozambique as well.
Habitat and ecology: This species grows in dry rocky woodland often dominated by Androstachys johnstonii, where it often hangs from boulders. This species is well protected by its rocky environment.

Description: Duvalia procumbens, today known as Huernia procumbens, is an intriguing succulent perennial herb with reptile-like sinuous, stems which trail close to the ground, occasionally lifting their 'heads' or becoming pendent. Flowers appear in inflorescences of 1 to 2 flowers, at the base of the young shoots; the corolla is 4-5.5 cm in diameter, with a chestnut-brown, glabrous annulus and slender sharply acuminate cream to earth-colored corolla lobes. The corona is seated at the base of a short tube, the inner lobes with a spreading-erect enlarged dorsal wing.
Note: D. procumbens is excluded from Duvalia and placed by Leach in Huernia, because the corona is not stipitate, the stem-teeth (rudimentary leaves) are devoid of denticles at the base and the corolla-lobes are neither replicate nor ciliate.
Stems: Procumbent, creeping, sometimes pendulous from rock faces, or semi-underground, terete, reptile-like, sinuous, bluntly (4-)5-(6-)angled, almost round, sides deeply furrowed with low pointed tubercles, 10-15 (-30) cm long 7-15 mm thick, dull green, pale greenish-mauve, purple in the stem grooves.
Leaves: Small, rudimentary, very acute which soon dry, and persist as curved white points or dropping oft.
Flowers: Flowers appear in upturned inflorescences of 1 to 2 flowers, at the base of the young shoots. Peduncle rudimentary, emerging from the base of the leaves. Pedicels approx 15 mm long. Sepals c 10 mm long much exceeding sinuses ad prominent between the corolla-lobes. Corolla inside cream- or putty-coloured, 25-55 mm across, shallow, with a brownish red, prominent raised annulus, glabrous or weakly rugose 8-9 mm across and c. 3 mm tall surrounding the sunken centre. Corolla lobes, narrowly lanceolate, sharply acuminate, 15-24 mm long, 4-5 mm wide, cream, grey or earth-coloured tips that are edged in red, often revolute to a greater or lesser extent, convex towards the tip, inside apically covered with short, acute, reddish hairs. Corona about 3,5 mm in diameter, 3 mm high, obtusely pentagonal at the thickened base. Inner corona lobes c 1.5 x 0.75 mm, shorter than anthers, with greatly enlarged dorsal gibbosity forming a spreading or suberect prominent triangular dorsal lobe, inner portion much reduced, closely incumbent on anthers. Poll greenish-brow. 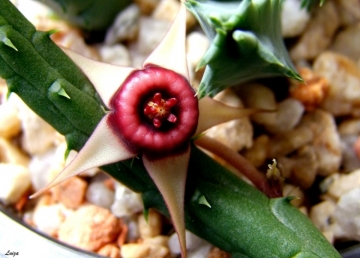 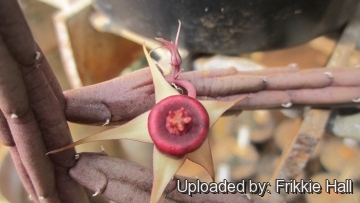 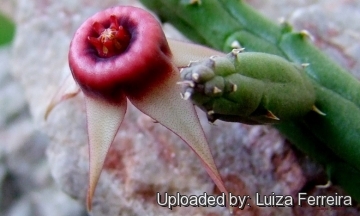 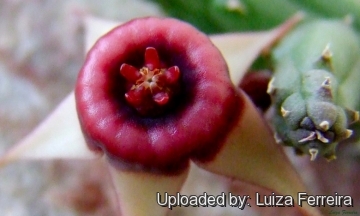 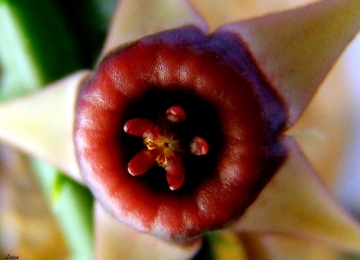 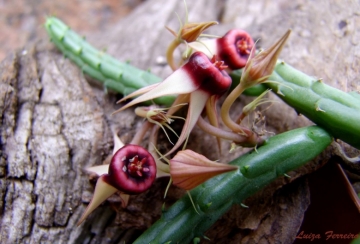 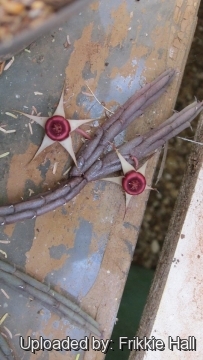 Huernia procumbens Photo by: Frikkie Hall
Send a photo of this plant.

Cultivation and Propagation: Huernia procumbens is an easily grown stapeliad, suited to hanging baskets as well as pots. It grow well in light gritty soil with a very liberal drainage. They should at all times sparingly watered (best rain water with some occasional fertiliser), and in winter time they hardly require any. They require outdoor culture, or a warm close greenhouse, while growing in the early part of summer, and afterwards may be ripened and kept in a greenhouse; but as they bloom chiefly in autumn, warmth is desirable to enable them to expand their flowers. They are also most attractive in a hanging pot with their trailing segments With numerous fleshy (non-hurtful) teeth. Some collectors enjoy the long, snake-like stems induced by an excess of water.
Spring: When winter ends and they begin to grow again, they will require much water and soaking the pots will no longer put the plants at risk for rot. In the spring they will grow well in partial shade and leaving them out in the rain may provide them with the water they need.
Summer: In the summer months they will tolerate heavy rain, but will be just as happy if the season is dry. It's best to sort out the stems while the plants are resting in the summer before they begin their autumnal growth cycle. They will tolerate very hot weather outdoors as long as they are kept in filtered light and this will encourage them to flower in the Autumn. They also enjoy some fertiliser. Moving the plants as they are developing buds may cause them to spontaneously abort the flowers all together.
Autumn: In the fall keep them outdoors until the night time temperatures drop below the 5°C.
Winter: Winter care presents no problems at 5°-10° C with plenty of light. As soon as they are flowered be sure to take extra precautions to keep them dry, because damp cool conditions when the plants are resting is an invitation to fungal infections, but - according to temperatures –some occasional lit watering may be useful.
Potting medium: Since roots are quite shallow, use a cactus mix or add extra perlite or pumice to regular soil potting soil. A gritty, very free-draining compost is suitable, and clay pots help the plants to dry out between watering. Re-pot every 2 years.
Pest and diseases: Huernia are generally fairly easy to grow, especially if kept pest-free. They are very susceptible to stem and root mealy bugs, and damage from these may well initiate fungal attack. Any time when there is a dead or dying stem in the pot it is important to remove it immediately and completely before other healthy stems can become ill too, isolate the healthy parts, dry them off, and re-root them in new compost.
Propagation: Easiest with stem cuttings. Allow cuttings to dry a day before planting. Stems must be laid (Not buried) on gritty compost and will then root from the underside of the stems. It can also be increased from seeds sowing in spring in moist, sandy peat moss. Barely cover seeds. Seeds germinate quickly. In any season it's best to lay the stems out for several days before replanting them and then pot them only in dry soil and withhold any water until they begin to shrivel or start growing again.