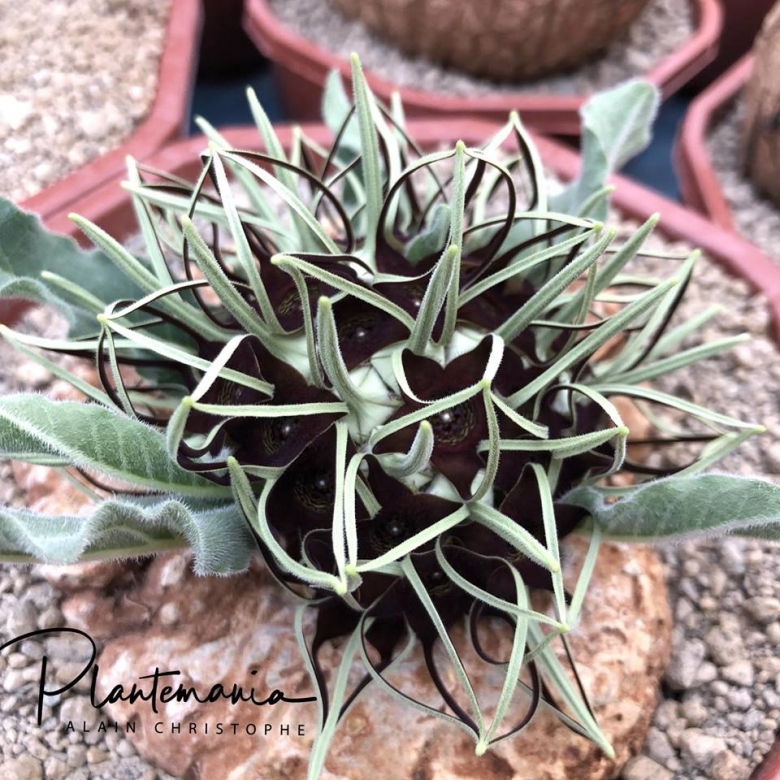 Origin and Habitat: Brachystelma barberiae occurs in Suoth Africa from Eastern Cape to Gauteng, KwaZulu-Natal, and Limpopo to as far north as Zimbabwe.
Habitat and ecology: This species is usually scattered widely but has been recorded as locally exceedingly common in places. Even if the remarkable inflorescence does not catch the eye in the wild, the putrid smell of the flowers is likely to attract attention. The depth of the tuber under ground varies from near surface level to 10 cm, depending on the soil structure. Generally the sandier the soil, the deeper are the tubers. It is of interest that such a robust, widespread species has no close relative in Southern Africa. The plants flower in spring and early summer with a peak from October to December. Brachystelma barberae is not threatened. It is thought that the distribution of this species is affected by its use as a food source by both people and animals to some extent.

Description: Brachystelma barberiae is a perennial caudiciform herb, with a dwarf, disc shaped underground tuber. It flowers in a dense globular, head above the tuber. The flowers, sometimes produced before the leaves number up to 50 on robust specimens, all open at one time in one spectacular global mass. The inflorescence is a peculiar a cage-like structure. The flowers about 4 cm long with five narrow corolla lobes united into a cage, are dark crimson on the inside, greenish yellow outside, with a nauseating rotting smell. All the above-ground parts are covered with coarse hairs and produce a watery sap when injured. B. barberiae is one of the most spectacular species of the genus and possibly the most stinky. It is probably the best known cultivated caudiciform asclepiad.
Derivation of specific name: The specific epithet honours the artist Mrs. Mary Elizabeth Barber, (1818-99), a well-known Cape botanical artist who came to South Africa with her 1820 Settler parents.
Tuber: Perennial, robust, flattened, irregularly shaped with age, 8-20 cm in diameter frequently half exposed in their rocky, grassland setting.
Annual stems: 6-10 cm long, upright to prostrate, semi-succulent, sparingly branched and pubescent with more hairs on lower surface. A tuber may produce more than one annual stem in a season.
Leaves: Simple, opposite, (2.5-)7-10 cm long, 0.8-2.5 cm wide, cuneate-oblong, linear to egg-shaped, acute, tapering into a short petiole, lightly hairy, usually appearing after the flowers.
Inflorescence: Usually in two opposite subterminal, compact, umbels of 20 to 25 flowers (rarely to 50), 10-12 cm across, appearing as one, spherical inflorescence surrounding the stem. Pedicels 10-20 mm long, spreading-pubescent.
Flowers: Sepals linear-lanceolate, up to 10 mm long. Corollas, crimson-brown, 2-4.5 cm tall, mottled with yellow, each comprising a long campanulate tube about 5 mm deep with crimson-brown bands on a yellowish background within, variably around mouth and 5 corolla lobes with recurved margins, drawn out into long linear tails united as a cage at the tips, above greenish on back, maroon to crimson-brown on inner surface, with hairs of same colour as surface and thus sometimes appearing glabrous within. Corona squat, hemispherical-campanulate, flat-topped, 1 mm in diameter, with inarched lobes leaving 5 slits between them. Inside, the flowers are dull purple and densely set with hairs that help to disseminate an unpleasant scent for attracting their carrion fly pollinators. Except for the variable size the flowers are tolerably uniform in character. The flowers have an extremely unpleasant scent and sometimes precede the leaves, opening in rapid succession, usually within 2-3 days.
Blooming season: Spring to mid-summer (in habitat from August to December), usually before the leaves.
Fruit: The fruit is a follicle with a thick, smooth, velvety pericarp up to 120 mm long and 30 mm in diameter. After fertilization, two follicles may develop from each flower but sometimes one aborts. The seeds are numerous and tightly packed within the fruit. 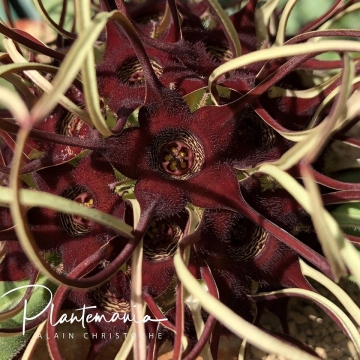 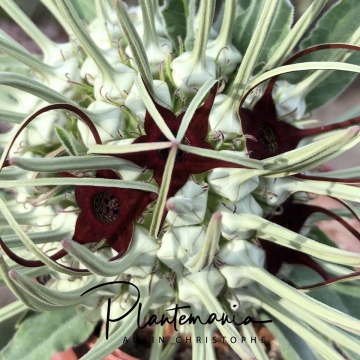 Cultivation and Propagation: It is a real challenge to grow and maintain good specimens as the plants are prone to rot.
The best way to reproduce this species is by growing it from seed and the fresher the seed, the better the results. Seeds germinate easily. Prick out seedlings carefully so as not to damage the roots. Plant in a well-drained soil mix. Brachystelma barberiae is very sensitive to frost and a challenge to even the best growers. If kept wet during their rest period, they will rot. Do not be lavish with artificial fertilizers, be frugal with watering generally and heed the natural resting periods. Plants are mostly grown as container subjects in collections in controlled environments, but may also be grown in rock gardens in areas where they occur naturally.
Traditional uses. The follicles and tubers are eaten and used a source of water